The tops of tsunamis glow red, it turns out 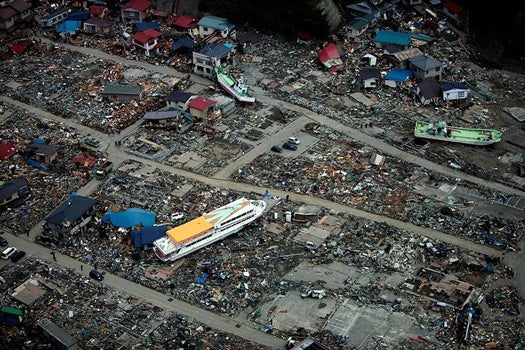 Researchers from around the globe using data captured by a camera on a Hawaiian mountaintop, have photographically captured the dim red atmospheric glow caused by the March 11 tsunami issued by the Japan earthquake that devastated that country and traveled across the Pacific to do millions of dollars worth of damage elsewhere. The observation–the first of its kind–could be used to predict future tsunamis before they hit, saving countless lives.

So how does a tsunami register in the atmosphere hundreds of miles above? On the ocean, tsunamis can move many hundreds of miles per hour, but until they get close to the shallows created by a landmass they alter the ocean very little, outwardly showing themselves as a wave just one inch high. But that added inch of ocean pressure pushes up on the atmosphere ever so slightly, and if you know where to look you can see its impact in the sky.

Where you look is specifically about 155 miles straight up in the ionosphere. Here, the air is much thinner and the amplitude of that upward-traveling pressure wave is able to grow. It’s also here that the pressure interacts with the charged plasma of the Earth’s upper atmosphere, creating a faint red glow.

You can’t see the glow with the naked eye, and in fact you can only see it from the ground with with the right kind of instruments (in this case, the Cornell All-Sky Imager at the Air Force Maui Optical and Supercomputing Station atop Haleakala) on a clear night with no moon. But a satellite in stationary orbit over the Pacific packing the same kind of instrument could likely monitor for tsunamis continuously.

That could be a big step toward a realistic tsunami prediction network. After all, this first-ever observation of tsunami-derived ionospheric “chemiluminesence” preceded the wave’s arrival in Hawaii by roughly an hour.