When icebergs break off into the polar seas, scientists usually have to work backwards to figure out why–they try to... 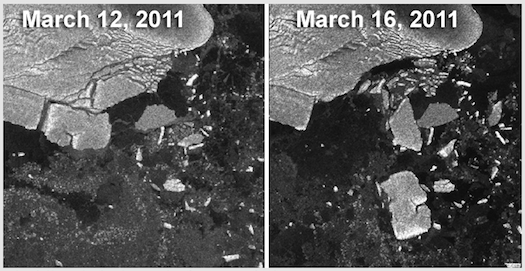 When icebergs break off into the polar seas, scientists usually have to work backwards to figure out why–they try to piece the clues together to figure out what caused an event that already happened. But in March, NASA scientists were able to follow the wake of the Japan tsunami over 8,000 miles, through the Pacific and Southern Oceans, until it snapped off several icebergs from Antarctica–icebergs that together are about as big as not one but two Manhattans (the island, not the drink).

Icebergs have long been suspected to have a link with seismic activity, but the creation of icebergs is usually a sudden and mostly unpredictable event, the culmination of lots of pressure over decades or centuries. The Tohoku Tsunami, triggered by the earthquake off the coast of Japan this past March, was a tremendous enough seismic event that cryosphere specialists immediately knew that tracking the wave could provide the first visual proof that this connection exists.

Tohoku didn’t disappoint. Eighteen hours after the tsunami struck Japan, the wave–now only about a foot high–met the Sulzberger ice shelf, a 260-feet-thick sheet of ice extending from Antarctica’s land mass towards New Zealand. The Sulzberger ice shelf is no brittle sheet of ice, either, having not moved in nearly half a century. Despite the relatively short height, the continuous pressure was massive enough to snap off several huge pieces of ice, one of which is about four by six miles in surface area–roughly the same size as the other chunks combined, and close to Manhattan’s 23-square-mile surface area.

Using satellite imagery (including some help from MODIS), the scientists were able to see the calving, or breaking off, in nearly real-time. (For a visualization of the worldwide earthquake’s effect, click here.) It’s definitive proof that a big enough tsunami can have huge effects, not just on the immediate site, but even a hemisphere away.