How do starlings manage to fly in such mesmerizing synchronized displays? 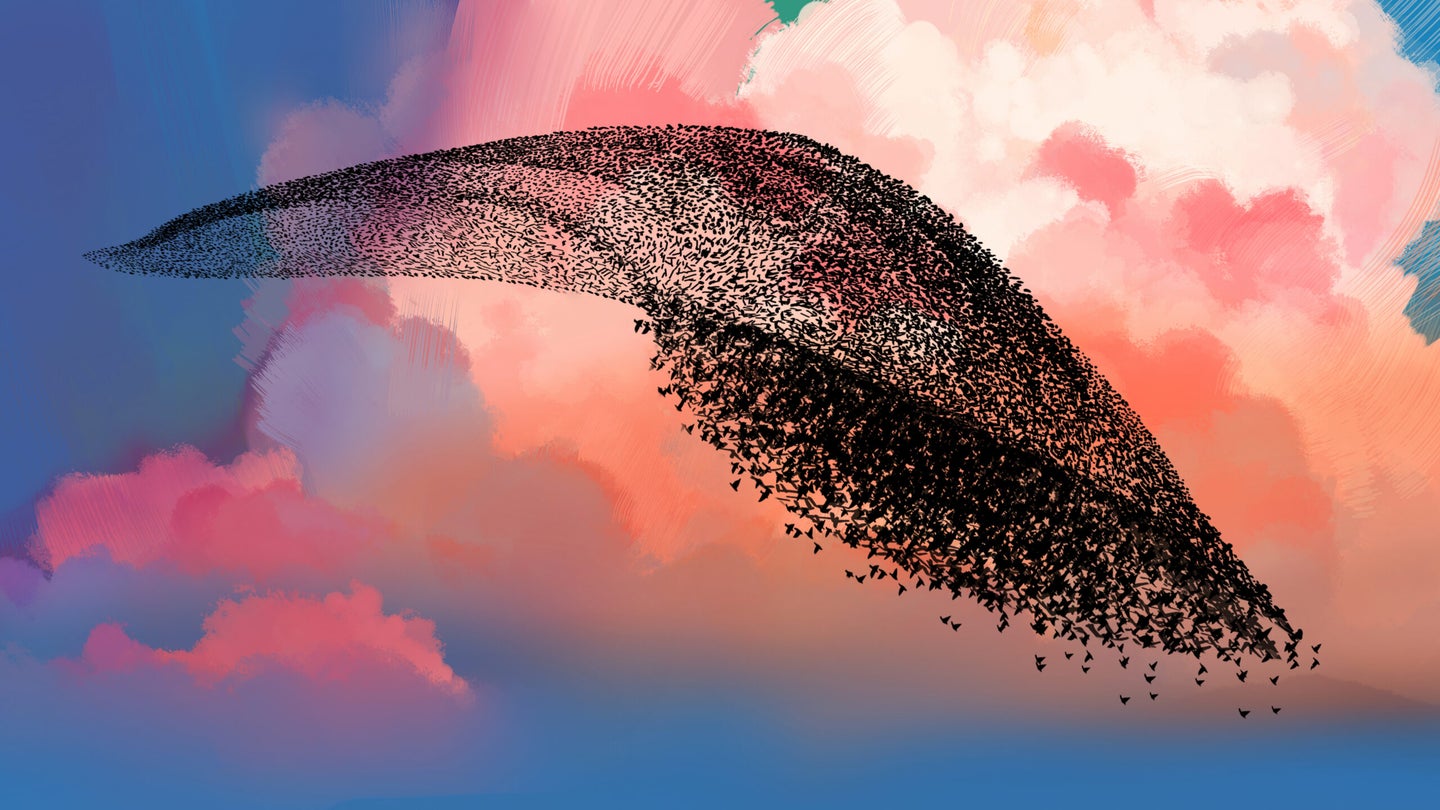 You don't need to go all the way to Denmark to see starlings in action. Bang Joy/Space Cat Agency
SHARE

At dusk in late September and early October, The Wadden Sea National Park on the West Coast of Denmark hosts one of nature’s wildest and most intriguing displays of avian acrobatics. In what’s known, somewhat ominously, as the “The Black Sun” (Sort Sol in Danish), droves of migrating starlings perform seemingly coordinated acts of aerial ballet. These vast shape-shifting clouds of birds darken the sky and temporarily blot out the sunset, hence the name.

European Starlings (Sturnus vulgaris) are opportunistic feeders very adaptable to different climates and geographies. Despite these advantages, their populations have declined in Denmark by 60 percent since 1976 due to changes in land use. However, you wouldn’t know that from the Wadden Sea murmurations, when up to a million of the smallish, glossy black birds perform for up to 45 minutes at a stretch. Although murmurations also occur in the spring, the displays are smaller and less impressive. According to Anne Goodenough, Professor of Applied Ecology at University of Gloucestershire, sudden drops in temperature cause a more uniform and abrupt departure of starlings. As spring migrations are more gradual and diffuse, fewer birds congregate at roosting sites. Not surprisingly, the autumn event is one of the most striking and popular natural spectacles in Denmark, and can draw up to a hundred thousand visitors. After several days of dancing, the starlings at the Wadden Sea will suddenly depart the marshes as one enormous flock and head south for the winter.

While the scale and spectacle of The Black Sun event is awe-inspiring, set as it is against the austere autumnal palette of the Wadden Sea, murmurations, so-named for the sound of wings beating in unison, occur all across the Northern Hemisphere—anywhere predatory birds like falcons or hawks attempt to prey on groups of migrating or roosting starlings.

[Related: Give your brain a break with these swirling bird and fish patterns]

The synchronicity of the birds’ dips and dives is so striking that, in the 1930’s, famed ornithologist Edmund Selous posited that these eerie displays were the result of telepathy. Although this theory failed to gain traction, much about starling murmurations, and flock movement in general, remained a mystery—and still does today. It’s generally accepted that these formations impart survival benefits to those who participate, thus giving them an edge in the Darwinian struggle to endure and reproduce. But the specific causes and benefits have been much debated and are still not entirely understood.

That isn’t to say that scientists haven’t tried to decode these aerial ballets. In 1987, computer scientist Craig Reynolds created a simulation to emulate these avian dances. As computer technology evolved, further studies became much more sophisticated, and in 2008 a group of Italian scientists was able to correlate 3D computer models of individual birds directly to the filmed group behavior of starling murmurations. In 2015 Charlotte Hemelrijk of the Centre for Ecology and Evolutionary Studies in the Netherlands elaborated on earlier computer modeling to examine specific fluctuations in flock behavior.

Citizen scientists represent another promising tool for mapping and reporting starling flock behavior. From 2014 to 2016, Goodenough collaborated with other academics at the University of Gloucestershire and the Royal Society of Biology to recruit bird-watchers from all over the world. Volunteers submitted reports from 23 countries covering more than 3,000 murmurations, and the resulting data helped paint a more informed, global depiction of the conditions that affect flock behavior. Unlike past academic studies, which often focused on avian biomechanics, the granular and geographically dispersed data gathered by volunteers demonstrated continuity between flock behaviors across different regions and in different habitats. Goodenough and her colleagues used their data to empirically test the likelihood of various proposed purposes for murmurations, and concluded that they primarily function as a defense against predators.

Although the science around flock behavior is still evolving, one doesn’t have to understand the biological underpinnings to appreciate the stirring visual spectacle murmurations create in places like the Wadden Sea.

The Wadden Sea National Park, a UNESCO World Heritage Site and the largest tract of undisturbed coastal marshland in the world, provides an expansive banquet of worms, bugs, and other delicacies for starlings as they migrate south from summer breeding grounds in northern Scandinavia. These huge congregations naturally attract predators like hawks and other raptors. Like so many creatures, starlings find strength in numbers. This is referred to as the dilution effect; the chance of an individual bird being targeted drops significantly when many congregate together, and the sheer number of rapidly shifting targets can distract and confuse predators. There are other advantages as well, according to Mario Pesendorfer, a research associate with the Smithsonian Migratory Bird Center.

“Murmurations also function as a super-sensory organism,” says Pesendorfer. “If a predator is detected on one end, that information is rapidly disseminated throughout the whole group, allowing a bird on the other end of the flock, perhaps dozens of meters away, to act on the same information.”

During the Black Sun, clouds of starlings interweave to create complex and fluid shapes that constantly morph, split, and reunite. Remarkably, the birds in this flying circus don’t collide—giving them the look of carefully choreographed performers to human viewers below.

This starling performance art is indeed coordinated, but not through telepathy as Selous once proposed. Instead, each starling simply mimics the behavior of its six or seven closest neighbors.

When faced with a potential predator, starlings dip their V-shaped wings and abruptly shift directions, much as a school of fish might flash sideways. From the ground, these sudden directional changes and shifts in orientation of individual birds cause a dark band to undulate through the rising and cascading mass of starlings, adding a striking visual flourish to an already fascinating display.

In addition to the sheer size, setting, and spectacle of the Black Sun murmurations, Goodenough says, another distinguishing factor is that the individual make-up of these murmurations is in constant flux. While such displays in many areas involve fixed flocks wintering in a specific location, at the Wadden Sea, migrating birds arrive and depart, creating a varying carousel of bird behavior.

You don’t have to go all the way to Denmark to witness an impressive display of starling murmurations. Starlings are arguably the most successful bird species in the US. The European starling was brought to the US from Europe in the 1890s by Victorian bird enthusiasts. Although a mere 100 were originally introduced, they outcompeted many indigenous bird. There are currently an estimated 200 million spread across the country.

Public parks and wildlife refuges (or anywhere else with abundant food sources) are often the best places to witness murmurations. New York City’s Central Park, which is where the birds were first released in the US, and New Mexico’s Bosque del Apache National Wildlife Refuge are considered standouts by avid bird watchers. The phenomenon occurs later in the US than in Northern Europe, with migration peaking from late November to early December. Weather can also play a part; calm, cold, clear days create the most conducive conditions for large starling murmurations. It’s theorized that brisk weather may draw the birds together so they can share warmth, but windy or rainy days may deter them because of the extra energy involved in maintaining formation.

Pesendorfer says that witnessing starling murmurations in-person can have a profound effect on the observer.

“The visual and auditory spectacle that murmurations present can overwhelm human senses,” says Pesendorfer.  “The scale and dynamics of murmurations challenge the boundary between individual and group. At least in my own experience, it causes me to ponder my role in human society.”