These jellyfish don’t have brains, but still somehow seem to sleep

Their strange ways could tell us about the evolution of snoozing. 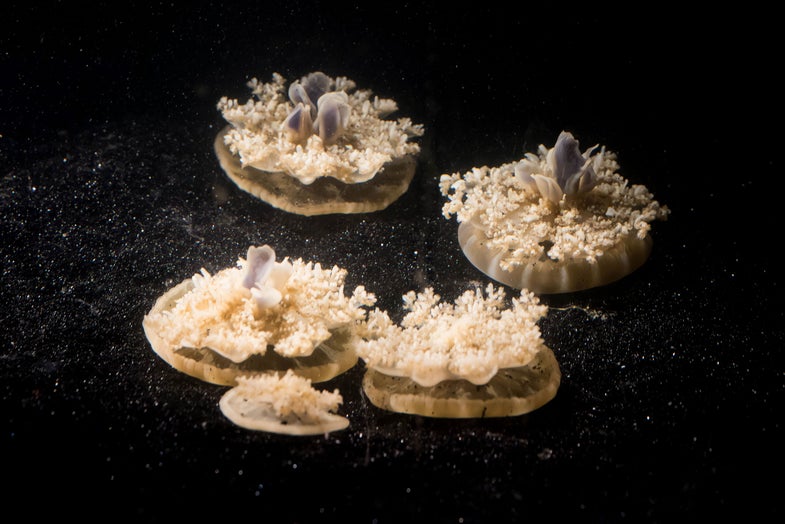 The upside-down jellyfish has a lower rate of activity at night. Caltech
SHARE

Ask a college student, infant, or anyone over the age of 23 if they like sleep, and they will likely tell you: sleep is good. But it turns out that sleep is so good, it might not even take a brain to do it.

Take the upside-down jellyfish: known by the scientific name Cassiopea, these jellyfish don’t have brains. They don’t swim around much, and can usually be found resting on the floor of shallow, warm bodies of water with their bells down on the floor, gently pulsing. But all that rest is not created equal, according to research published today in the journal Current Biology. During the night, these simple animals look an awful lot like they’re sleeping.

The finding that upside-down jellyfish have a sleep-like behavior is important, because it counters the idea that sleep requires a brain, says Ravi Nath, one of the lead authors on the study. “There was this assumption that an animal needs a centralized nervous system to sleep, and that it’s a function of these complicated higher level systems,” he says. Nath and the other lead authors, Claire Bedbrook and Michael Abrams, are graduate students at the California Institute of Technology.

The team thinks that identifying sleep-like behavior in this jellyfish species might indicate that sleep evolved early, before the central nervous system did. “We don’t know that jellyfish have high level cognitive behaviors, which would suggest that this sleep state is something that’s much simpler, and predates this higher level cognition,” Bedbrook says. That could mean that the original evolutionary purpose of sleep was something simple, like conserving energy for neurons, and not for complicated things like learning or memory, she says.

There are three components of sleep behavior: periods of inactivity, reduced response to a stimulus during the inactive state, and a reliance on sleep for health. Many stings later, the researchers concluded that the upside-down jellyfish meets all three criteria. First, the jellyfish cycle through periods of decreased activity, which the team tracked by measuring the rate that the jellyfish pulse during the day and during the night.

The upside-down jellyfish prefers to rest on a solid surface, and the team used that preference to examine their response to a stimulus. The jellyfish were placed in a tank with a false floor, and when the floor was removed, they quickly swam to the newly revealed bottom of the tank. At night, though, it took the jellyfish longer to reorient and reach the tank floor. “It’s an obvious difference,” Abrams says. “But it’s completely reversible. Once they wake up, if you repeat the experiment immediately, they respond as if they’re awake.”

Finally, the team watched how the jellyfish responded when they were prevented from going into their period of inactivity. “We kept them awake by shooting a pulse of water at them for ten seconds every two minutes,” Bedbrook says. “Once you stop preventing from sleeping, they should have a rebound response where they go into a deeper or long sleep state. This is equivalent to when we pull all nighters. You’re always tired the next day, and will either sleep during the day, or have a longer sleep at night.” Sure enough, after they were kept awake all night, the jellyfish exhibited lower activity the next day.

Western Washington University jellyfish researcher Jenny Purcell, who wasn’t involved in the new study, says she’s not entirely surprised at the idea that jellyfish would sleep. However, she thinks the behaviors described in the current study might disappear if the animal was in its natural environment, and not in a lab setting. “But the study is looking at sleep, not the natural behavior of the jellyfish, so it’s perhaps not important that it doesn’t reflect nature,” she says.

But Purcell says that calling these behaviors sleep could be an overstatement, and University of Copenhagen jellyfish researcher Anders Garm also noted the potential issues with the researchers’ definition of sleep: “They define it from some motor behavior, which is fine, as long as you’re really open as what your definitions are. Many people would not agree it’s enough to talk about real sleep.”

Bedbrook says that the team knows there will be some who disagree with their definition, and that some researchers would include things like rapid eye movement and specific patterns brain activity to call it sleep. “As a behavioral neuroscientist, you rely on a set of characterizations for the behavior you’re interested in. You can’t go in and ask these animals,” she says. “But we do believe in this set of criteria.”

For more conclusive evidence, the team would like to do a genetic analysis, to see if genes associated with sleep in other animals are present in the upside-down jellyfish. “I think that’s important because of these other broader questions related to the way sleep evolved, and it’s function purpose,” Abrams says. The team has some indication that the jellyfish share a biological basis for sleep-like behavior with other animals—the hormone melatonin, which regulates sleep and wakefulness, decreased their activity.

Spending time in the lab with Cassiopea gave Nath, Abrams and Brooks a tolerance for jellyfish stings and an appreciation for the finicky needs—and calm beauty—of the species. Investigating sleep behavior also gave the team a chance to talk about their work with a wide range of people, Nath says. “We’ve talked to everyone from parents to little kids, and you say, ‘Do you think all animals sleep? Do you think jellyfish sleep?’ and we’re really delighted that everyone has an opinion.”