The ARkStorm project reminds residents that preparedness is key. 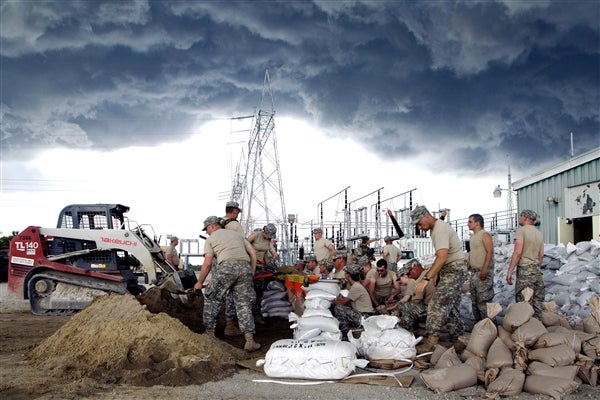 The Army National Guard readies sandbags to protect a generator from floods in Iowa in 2008. Staff Sgt. Oscar M. Sanchez-Alvarez via Dept. of Defense
SHARE

Dale Cox isn’t your typical prophet of the apocalypse. But in his work at the U.S. Geological Survey, the bald, bearded, and technically-precise project manager spends an inordinate amount of time on catastrophe. Since 2006, Cox has worked with the interdisciplinary Science Application for Risk Reduction division in an effort to model hypothetical but entirely feasible disasters—and sell local governments on prevention methods.

The division’s best-known project to date is ARkStorm, a realistic scenario of a California-wide meteorological disaster that would cause floods, mudslides, and an estimated $725 billion in damage. While it sounds Biblical in nature (and you would need an ark to ride it out), the name stands for “atmospheric river 1,000,” an unusually intense version of the winding, water-dense currents that were pummeling California when Cox spoke with me from his office in Sacramento.

When the team (previously known as the Multi Hazards Demonstration Project, co-founded with superstar seismologist Lucy Jones) began work, scientific understanding of atmospheric rivers was still in its infancy. “The science behind them was maybe 15 years old, because that’s when they put up the satellites that could detect these narrow bands carrying huge amounts of water,” Cox says. Locals have long experienced the weather phenomenon, which they called the “Pineapple Express” due to its association with storm fronts in Hawaii. But most people have forgotten the worst atmospheric river in recorded history—and the fact that a similar event could strike the Golden State again at any time.

That singular storm, called the Great Flood, unleashed 10 feet of rain and snow over California in 43 days at the end of 1861 and the start of 1862. The precipitation formed an inland sea that stretched 300 miles down the Central Valley and as much as 60 miles wide. At least 21 people died, the state declared bankruptcy, and, Cox says, “it drowned so many cattle” that California changed from a predominantly ranching economy to the agricultural salad bowl we know today.

But as quickly as it came, it was forgotten. “This not really taught in schools in California,” Cox says. “A lot of people don’t know about that.” ARkStorm attempts to shine through that historical myopia, and conceptualize what another flood of this magnitude would be like if it struck California today.

Using the data derived from significant storms in 1969 and 1986, Cox and his team modeled a succession of atmospheric rivers that sweep hot air and water in from the Pacific week after week. The goal was to create a “feasible” event, Cox says. “We dialed it back. If we do worst case scenarios, people say, ‘Eh, that’s a worst case scenario, who cares?’”

But even the most humdrum ARkStorm predictions are hair-rising. One in four buildings in the state would flood. Rivers would swell and even coastal communities would be inundated, as floodwaters rushed to the shore too fast for the ocean to absorb them—a situation similar to the long, slow leak Houston saw after Hurricane Harvey. The biggest challenge is the sheer number of people in the path of destruction. The 1860 census recorded just 379,994 in California; today there are almost 40 million. The USGS team estimates at least 1.5 million people would need to evacuate, and still there would be “a substantial loss of life.”

The analysis took hundreds of consultants and two years of work to produce. It also required the creation of entirely new tools. Cox’s USGS team created the first landslide susceptibility map, which is now in wide use for a variety of research and planning projects. The final report is a testament to the possibilities of environmental modeling. But how likely is another ARkStorm in real life?

The only hope, then, is preparedness. Cox has worked with every group imaginable, from real estate developers to fire departments and other emergency responders. “We’re finding these hitherto-unknown vulnerabilities,” he says. By working through hypotheticals in advance, people are better able to respond to real crises. Cox’s team had worked with city officials in the Tahoe Basin, for example, and identified several weak points in their response plan that they remedied before a 2017 storm dumped 23 feet of snow in just three weeks. (There was, of course, room for improvement: “The impact of telecommunications wasn’t as bad as we had considered,” he says. “We also didn’t consider that there were some areas that flooded and remained flooded because there was only really one drain to the community, and they’d have to send these guys down in these scuba suits to unblock this drain to try to let the water out.”)

While Cox says he has “scenario fatigue” and wonders how much longer he can continue “herding cats,” he’s still got a few ongoing apocalypse projects. His team is working with municipalities to scope out the specific challenges an ARkStorm will create for their community, from Ventura to Nevada. They’ve modeled other disasters, too, like the potential for an earthquake along the San Andreas fault. Perhaps their biggest contribution to date is the Great ShakeOut, a scientifically-validated earthquake drill involving 68 million people around the world in 2018.

“You’re going to have to save yourself,” he says.