This is the cutest that spider mating has ever been. 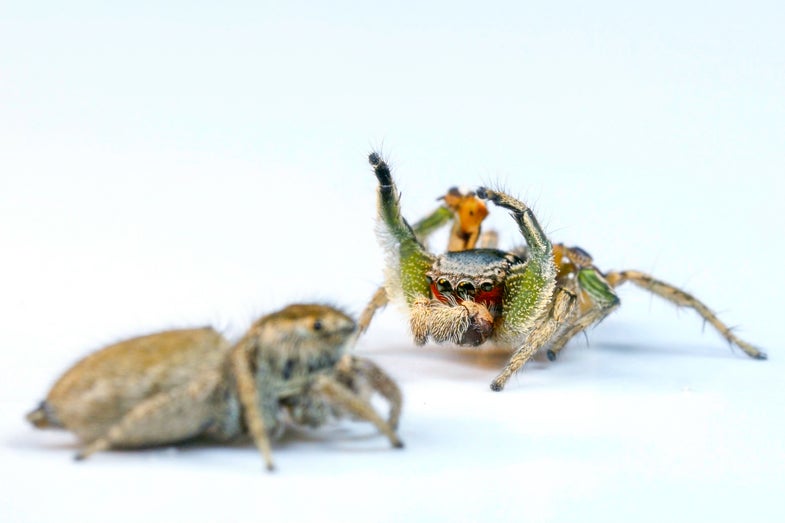 You don’t often feel bad for spiders. But when a fuzzy, black-eyed jumping spider raises his green forearms into the air, wiggles his butt, and flashes his orange knees, only to have a lady spider literally turn around in the middle of his dance…what kind of monster doesn’t feel a pang of empathy? It doesn’t even matter that arachnids are unlikely to experience rejection and angst the way humans do—you feel for the little guy.

It’s somehow worse once you know that male jumping spiders evolved this ability specifically to woo mates. Or at least, that’s the going theory. A group of biologists at the University of Pittsburgh wanted to understand why Habronattus pyrrithrix performed these mating dances even when the female partner wasn’t looking in their direction. Why dance for a lady who’s not even paying attention?

This isn’t an unheard of problem in the animal world. Peahens—the female equivalent of peacocks—tend to look elsewhere while their potential mates are strutting around. It seems that part of the point of the peacock display is to capture the distracted peahen’s attention. And so too with jumping spiders. The biologists video-taped pairs of H. pyrrithrix as the males courted the females to figure out how this delicate little performance worked. They published their findings in the journal Behavioral Ecology, along with an oddly delightful video of the dance.

You can see in that recording that the lady spider seems pretty uninterested in what the male is doing. He waves his arms, he waggles his knees, and when he finally makes his move, he’s totally rejected. He doesn’t even seem that intent on staying in her field of view, though. It’s possible that this is actually intentional, since cannibalism is not uncommon in the jumping spider world, at least in captivity. If ‘eaten alive’ were a potential option before and after sex, you might also be hesitant to really commit to the mating ritual.

Then again, it may be that the male simply doesn’t have to constantly move himself to be in her field of view. Jumping spiders have eyes on the sides of their head, so they can see movement in every direction, though their side-eye vision isn’t especially sharp. His dance might be just the trick to get her attention. Once she turns to face him, he starts that little knee raise bit to up the ante, now that he knows she’s seen him.

As for her apparent disinterest, that’s a pretty standard reaction to this mating dance. About 70 percent of the time, female jumping spiders didn’t look at the males. The biologists aren’t totally sure why this was, though they have some theories. One is that the lady only needs a few quick glances to make her decision. Another is that she just literally can’t focus for that long, and so the guy keeps dancing to re-capture her attention. Or it could be that she’s keeping an eye out for predators that might be notice a bright green waving spider and eat both of them.

Or maybe—just maybe—it’s a test. By turning away, the female spider is forcing her partner to interpret her signals and react appropriately, so she could then differentiate between the guys who care to really court her and the dolts who just want to wave their butts around. Males who accurately interpret her body language might be better partners. Or, as the biologists put it in the paper, “that more attentive males may be more successful communicators and, in turn, more valuable mates.”