This major group of diverse bats are auditory innovators. 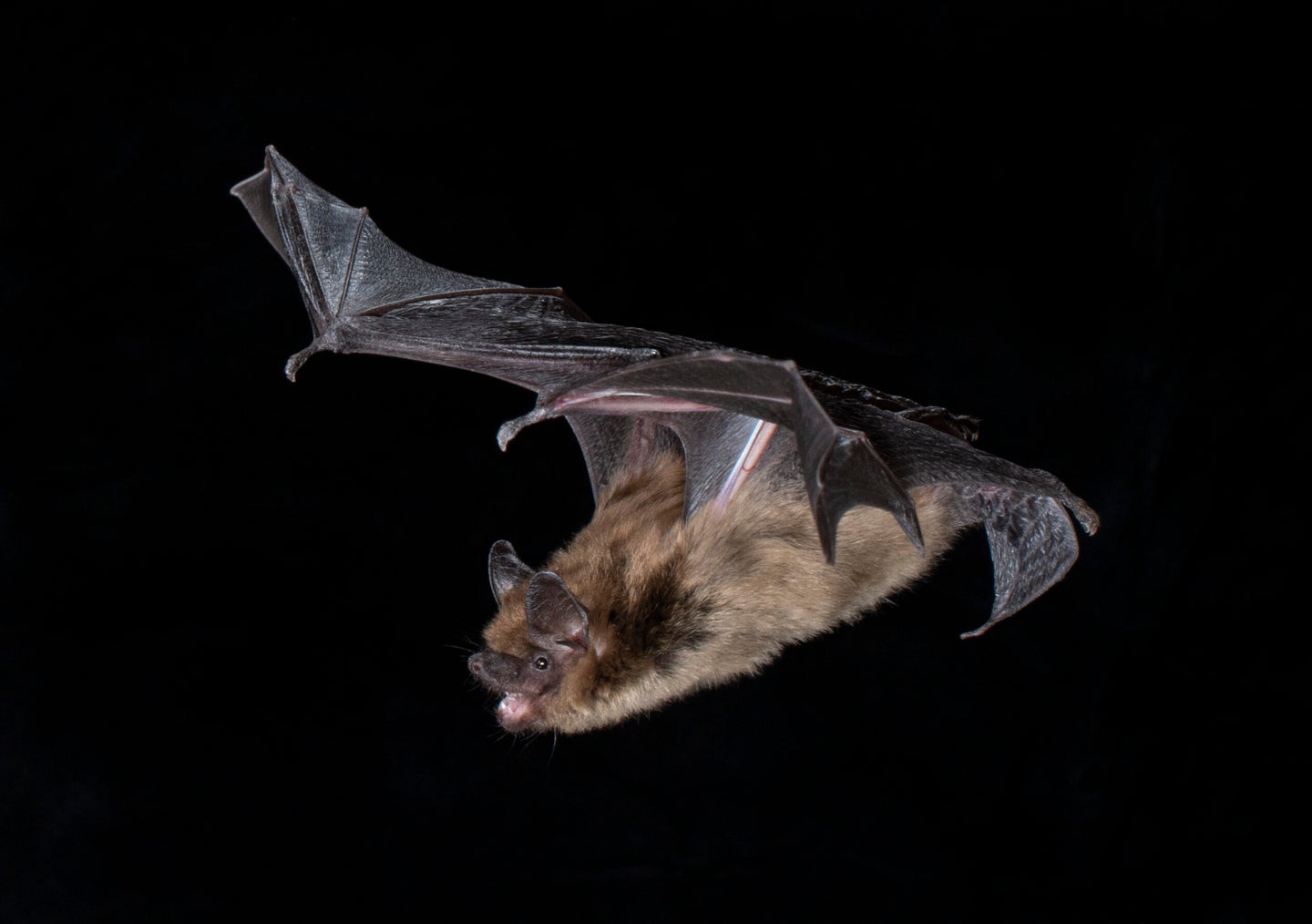 A big brown bat, a common North American species and a member of the "yang" group of bats with highly specialized inner ears. Photo by Sherri and Brock Fenton
SHARE

Bats are masters at detecting sound—and a lot of it has to do with the mechanics and structure of those adorably large ears. A set of unique inner ear features may explain how one group of bats evolved the sophisticated echolocation strategies that have allowed them to thrive on every continent except Antarctica, scientists report today in Nature.

The researchers examined the skulls of 39 bat species from two major groups called Yinpterochiroptera and Yangochiroptera. They discovered that the yangochiropterans, which includes most bat families and 82 percent of echolocating species, have inner ears unlike those of any other mammal. These bats have inner ears with extra space inside the cochlea and more neurons, which may help them hunt within a broad range of environments.

“We posit that it enables the really complicated echolocation calls that the yangochiropteran bats are famous for,” says Bruce Patterson, a curator of mammals at the Field Museum of Natural History in Chicago and coauthor of the findings.

Bats were traditionally divided into two groups called Megachiroptera and Microchiroptera, or megabats and microbats. Megachiroptera included the flying foxes, which generally find fruit and nectar by sight and smell, although a few also use tongue clicks as echolocation signals. Microchiroptera encompass the bats that have a type of echolocation that uses sounds produced in the larynx, known as  laryngeal echolocation. Microbats mostly eat insects, including agricultural pests, and other small animals.

However, since 2000, genetic evidence has indicated that some of these echolocaters are actually more closely related to megabats than to other microbats. This led researchers to propose two new groups. Yinpterochiropterans dwell in the Eastern Hemisphere and include flying foxes as well as a few other families such as the horseshoe and mouse-tailed bats. By contrast, the 938 yangochiropteran species are found around the world. Their ranks include the free-tailed bats, vampire bats, ghost-faced bats, the big brown bat, and the ever-popular charismatic Honduran white bat.

The wide array of adaptations found among these bats have stymied scientists searching for anatomical traits that could differentiate yangochiropterans from yinpterochiropterans. “Most of the diversity is in the yangochiropterans,” Patterson says. “So finding something that tied them all together was like a needle in a haystack, but this inner ear character suite seems to be exactly that.”

He and his collaborators investigated skulls from 19 of the 21 families of living bats. The team used CT scanning to peer inside the tiny skulls and examined fine cross sections of the inner ear structures under the microscope.

Since the Jurassic Period, mammals have had a distinctive arrangement of inner ear structures within the snail shell-shaped cochlea. A cluster of neuron cell bodies called a ganglion transmits nerve impulses received by hair cells to the brain. The ganglion is contained in a thick bony wall perforated by tiny pores that allow nerve fibers to pass through.

But in yangochiropterans, the setup looks a bit different. “As you ascend this spiral, the wall opens up,” Patterson says. In some bats, the tiny pores become “much bigger windows” that allow large nerve bundles to pass through. Eventually, Patterson says, “the wall just disappears and the ganglion actually flops out of the canal.” In other yangochiropterans, the bony wall is absent throughout the length of the ganglion canal. As a result, the bats can pack in more neurons to receive incoming auditory signals.

What this suggests, Patterson says, is that “it was the greater freedom from constraints of the bony canal, the larger size of the ganglion, and the more intimate bundling of [nerve fibers] that was responsible for the explosive diversification of the yangochiropteran bats.”

Among yinpterochiropterans, the species that echolocate emit a barrage of sound pulses at a constant frequency. This kind of echolocation is great for finding insects scampering over leaves and other clutter but isn’t much help for open-air hunting, Patterson says. Yangochiropteran bats utter echolocation calls at longer intervals that start off high before swooping down to lower frequencies. These cries effectively give the flying mammals a more powerful “flashlight beam” that can travel farther and can gather more diverse information about their surroundings.

The strategy could be adapted for a broader range of conditions. It “represented kind of an adaptive breakthrough for bats because it gave them mastery of the night skies and freed them from focusing on bushes,” Patterson says.

The findings indicate that the walled canals characteristic of yinpterochiropteran bats transitioned over time to create the unique inner ear architecture of yangochiropterans, M. Brock Fenton, a biologist at Western University in London, Ontario, wrote in a short review published in the same issue of Nature. This supports the idea that echolocation emerged before this split, and the skill was later lost in some yinpterochiropterans.

“This is an exciting new mammalian character identified in bats that can be used to shed new light on how laryngeal echolocation has evolved in mammals, addressing a long-standing evolutionary debate,” Emma Teeling, a professor and bat biologist at University College Dublin who wasn’t involved in the research, wrote in an email.

Intriguingly, the researchers identified two yangochiropteran bats that, unlike their close relatives, had a thick bony wall running the entire length of the cochlea. It’s not clear why this evolutionary reversal took place, although Patterson suspects it’s related to the bats’ highly specialized hunting strategy, which involves skimming the water’s surface and grabbing small fish or insects with their feet.

This observation highlights the fact that many questions about how echolocation has evolved in both bat groups remain to be investigated, he says.