The 10 worst insect stings in the wild

Ranked by a guy who let a spider-hunting wasp sting him––in the name of science. 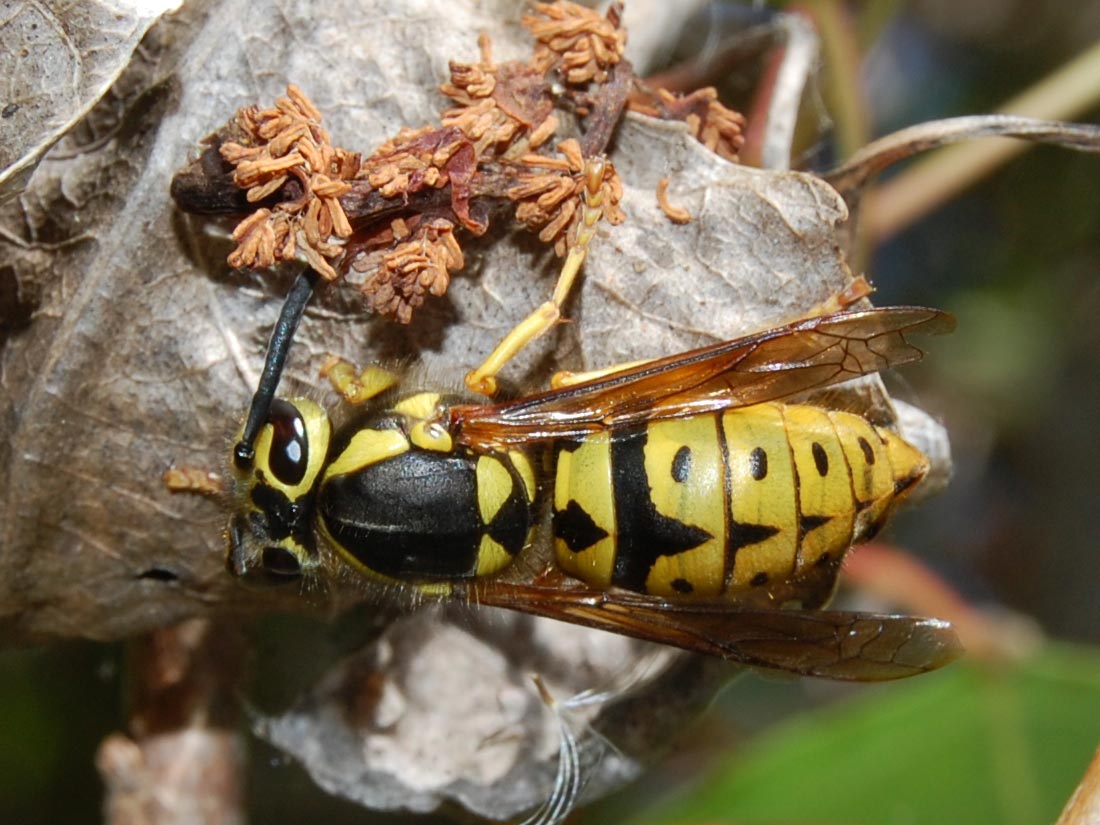 The common yellow jacket will swarm around food and give you a sting to remember. Eugene Zelenko
SHARE

This article was originally published on Field & Stream

Snakes aren’t the only critters with poison potential. Insects also evolved to use venom as a weapon for warding off attackers or immobilizing prey. But instead of using their fangs as a delivery device, insects use a stinger. Originally called an ovipositor, stingers transformed over time from hardened drills that bore through plant tissues to deposit eggs to barbed syringes that pierce flesh and inject a toxic chemical cocktail. Since only female insects had ovipositors, only female insects now have stingers. Depending on the size of the stinger and the potency of the venom, the effect on a human victim ranges from “so what?” to soul-searing.

Perhaps no scientist in the world understands this hierarchy of hurt better than Justin O. Schmidt. An entomologist at Southwestern Biological Institute and author of The Sting of the Wild, Schmidt is famous for his Pain Scale for Stinging Insects, a four-point system that rates the torment wrought by each of the 80-plus insect stings that he has willfully endured. Schmidt also describes—with a loopy specificity that calls to mind a wine critic’s tasting notes—the essence of each sting. At one end of the spectrum is Triepeolus, a genus of parasitic bees that score a mere 0.5. (“Did I just imagine that?” writes Schmidt of the bee’s pinprick assault. “A little scratch that dances with a tickle.”) At the other end are the baddies below.

Schmidt’s pain scale is obviously subjective. An estimated 9,000 species of ants, 20,000 species of bees, and 800 species of stinging wasps exist worldwide, and he hasn’t sampled every one…yet. But let’s face it, most ranking systems are subjective. You have to respect a guy who’s willing to let a two-inch-long spider wasp that hunts tarantulas sink its stinger into his arm—all in the name of science. Disagree with these picks? Roll up your sleeves and start your own list. 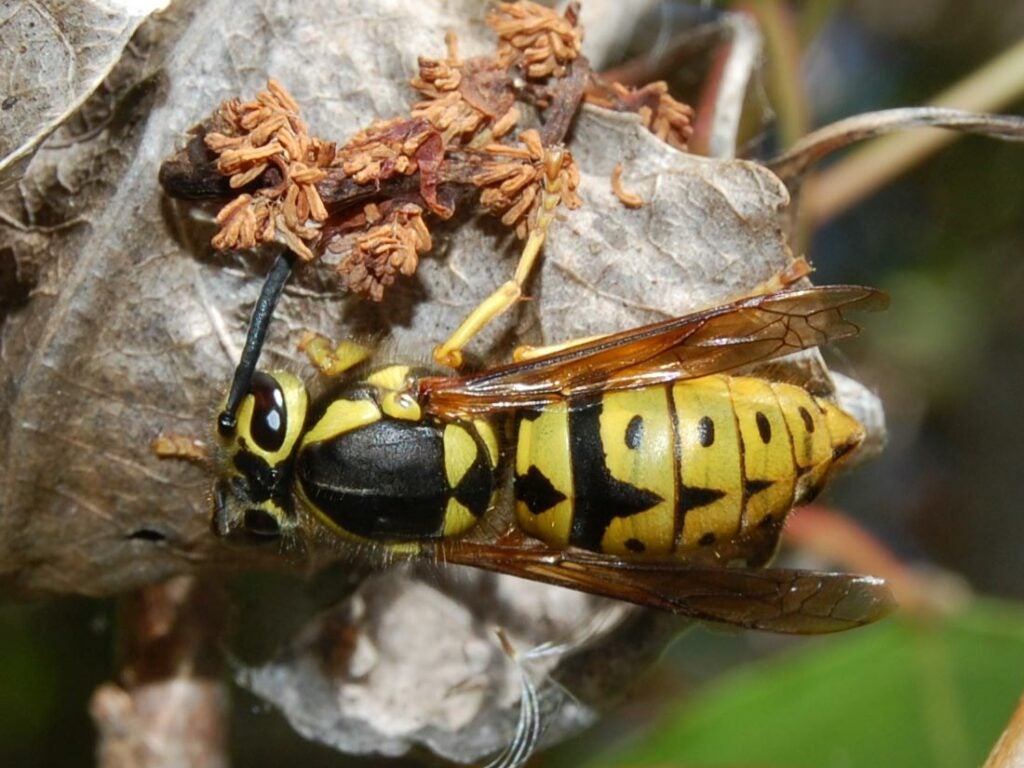 The common yellow jacket will swarm around food and give you a sting to remember.

This flesh-eating wasp preys on flies, moths, grasshoppers, cockroaches, cicadas, grubs, bees, spiders, and other yellowjackets. They’ve also been known to forage flesh from the open wounds of horses. Yellowjackets bite to get a better grip for driving the stinger in, and the intense burning of their venom lasts for two minutes before beginning to taper off, leaving behind an inflamed, red wound. 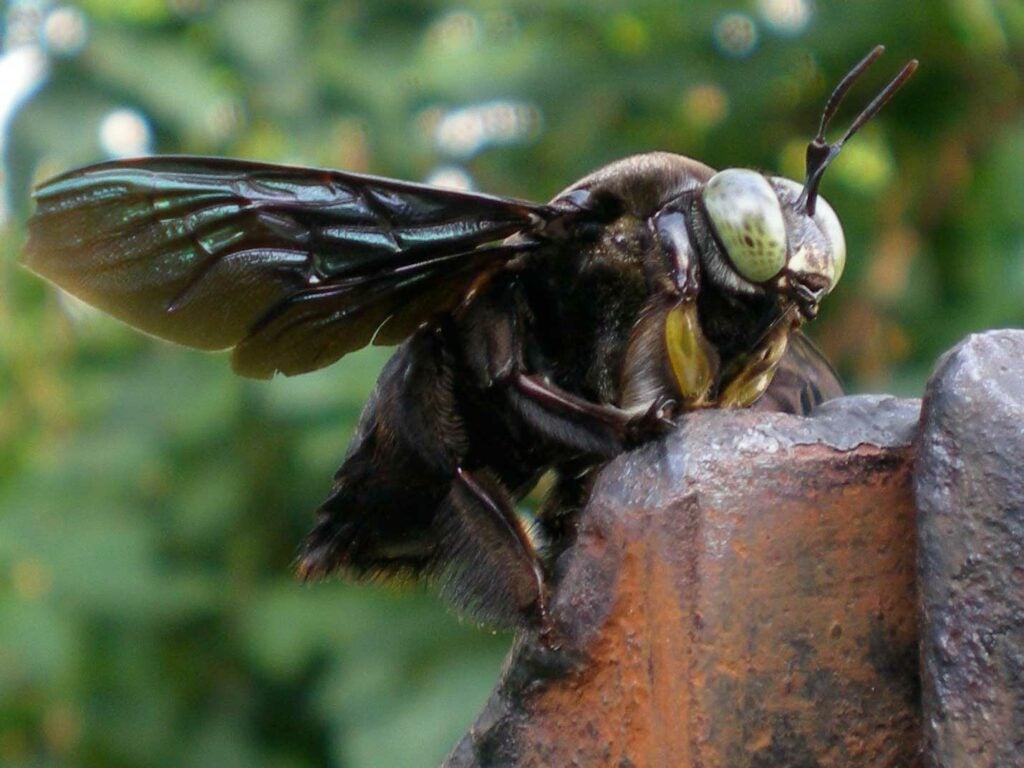 While a carpenter bee is usually docile, it will deliver a painful sting when provoked.

One of the world’s largest bees (more than twice as big as a bumblebee), this gentle giant is striking with its mouse-size black body and iridescent purple wings. A burrower that uses powerful jaws to tunnel into wood, it likes to nest in dead tree branches but is sometimes found in the exterior walls of houses. It’s not terribly combative but is known to pack a punch when it does sting.

“Electrifying, sharp, and piercing. Next time hire an electrician.” 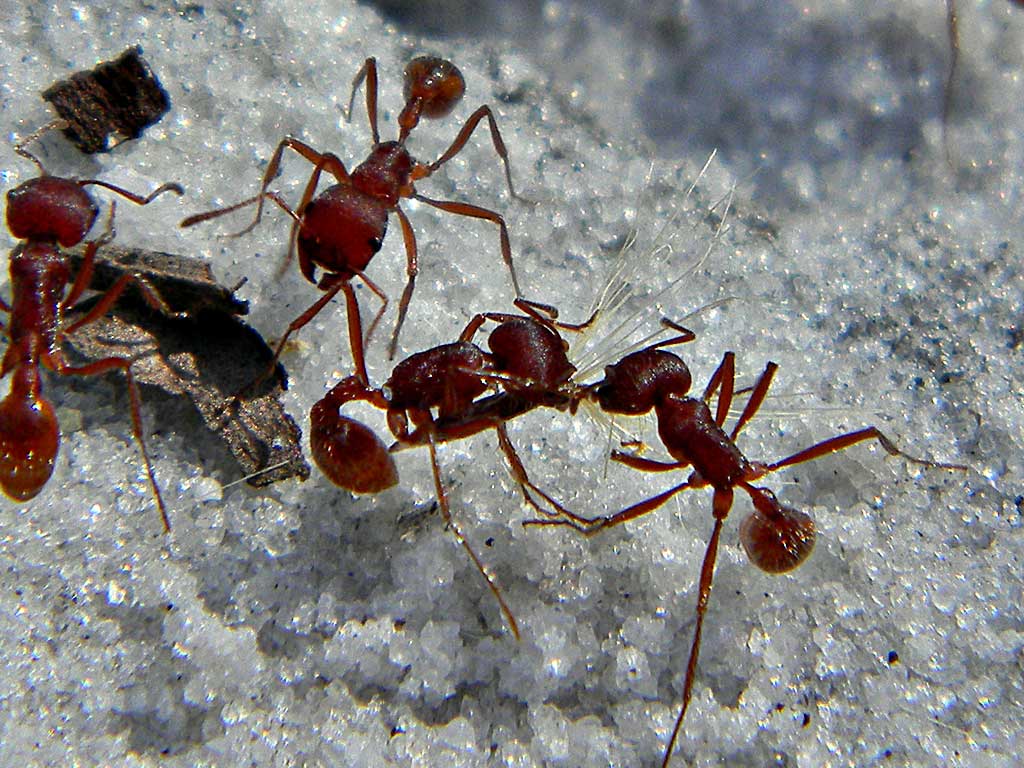 The Florida harvester has one of the worst ant stings in the world.

The only harvester ant east of the Mississippi, this seed-gatherer builds nests in sandy, open areas and covers its mound with small pebbles or burned charcoal. Colonies can survive for decades but often relocate in response to changes in their microclimate. Stings are more painful and last longer than most ant stings, usually for hours, with swelling and a watery, sticky secretion oozing from the wound.

“Bold and unrelenting. Somebody is using a power drill to excavate your ingrown toenail.” 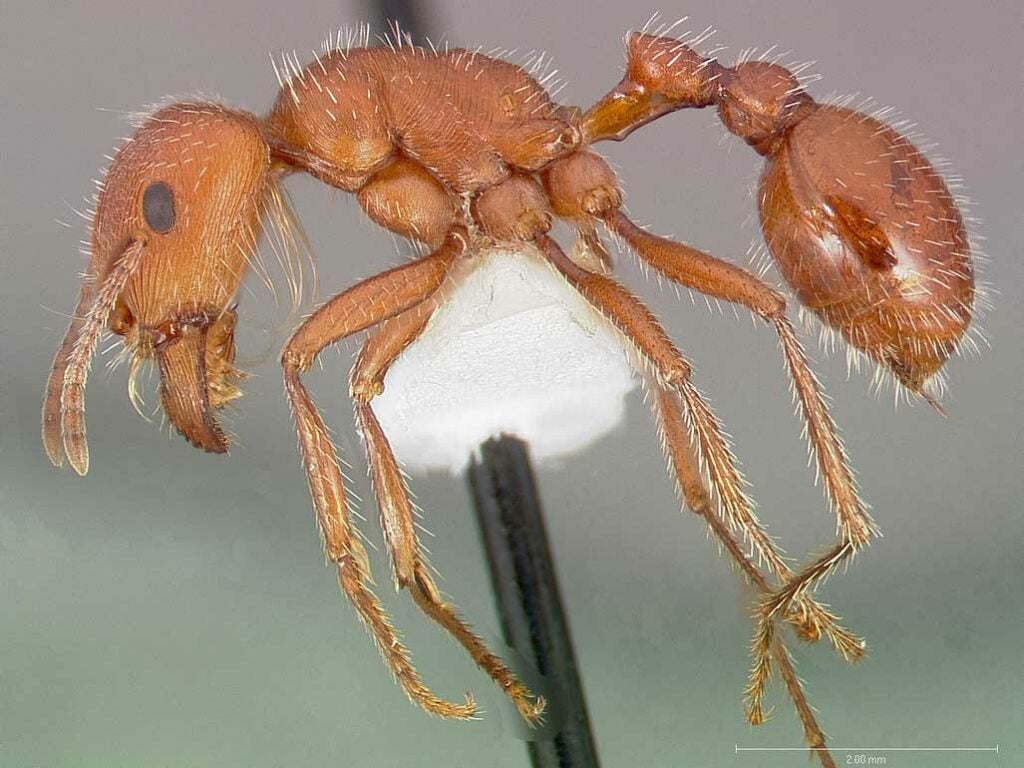 The venom of a Maricopa harvester ant is incredibly toxic.

The Maricopa harvester ant lives throughout much of the western U.S. and Mexico. One 1996 University of Florida study cited it as having the most toxic insect venom in the world—about 20 times stronger than that of a honey bee. Legend holds that Mexican outlaws and American Indians were known to torture and kill their enemies by staking them to harvester ant nests. A sting produces intense, long-lasting misery that’s among the worst of any North American stinging insect.

“After eight unrelenting hours of drilling into that ingrown toenail, you find the drill is wedged in the toe.” 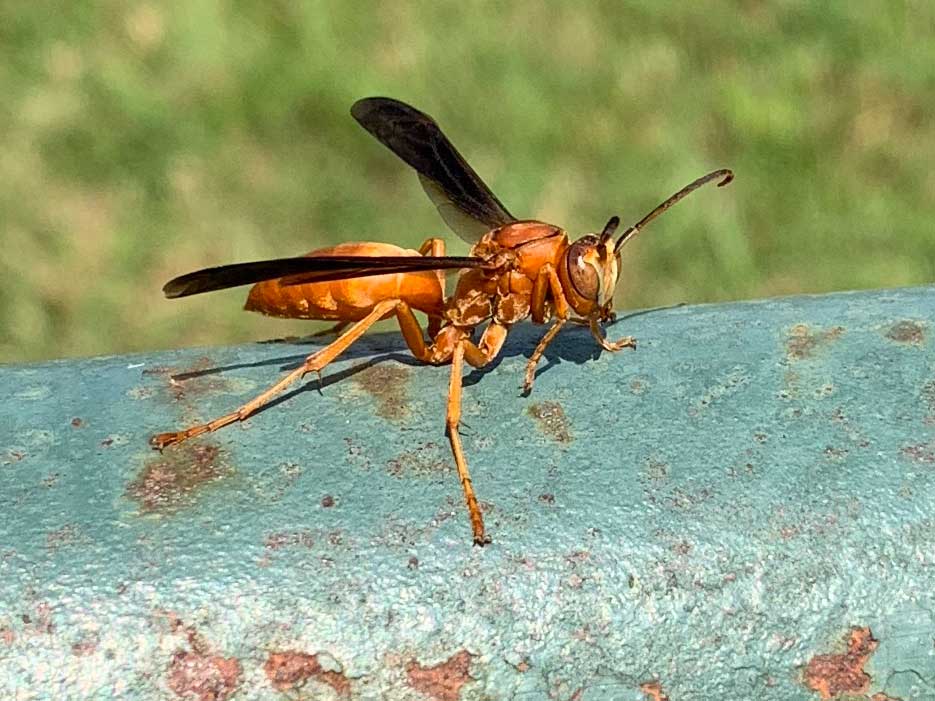 If you antagonize a red paper wasp near the nest, there’s a good chance her friends will be on the warpath.

These highly social wasps build papery nests of plant fibers and prey largely on caterpillars. When alarmed, a single red paper wasp can release venom into its nest, which alerts and rallies its nestmates to attack.

“Caustic and burning, with a distinctly bitter aftertaste. Like spilling a beaker of hydrochloric acid on a paper cut.” 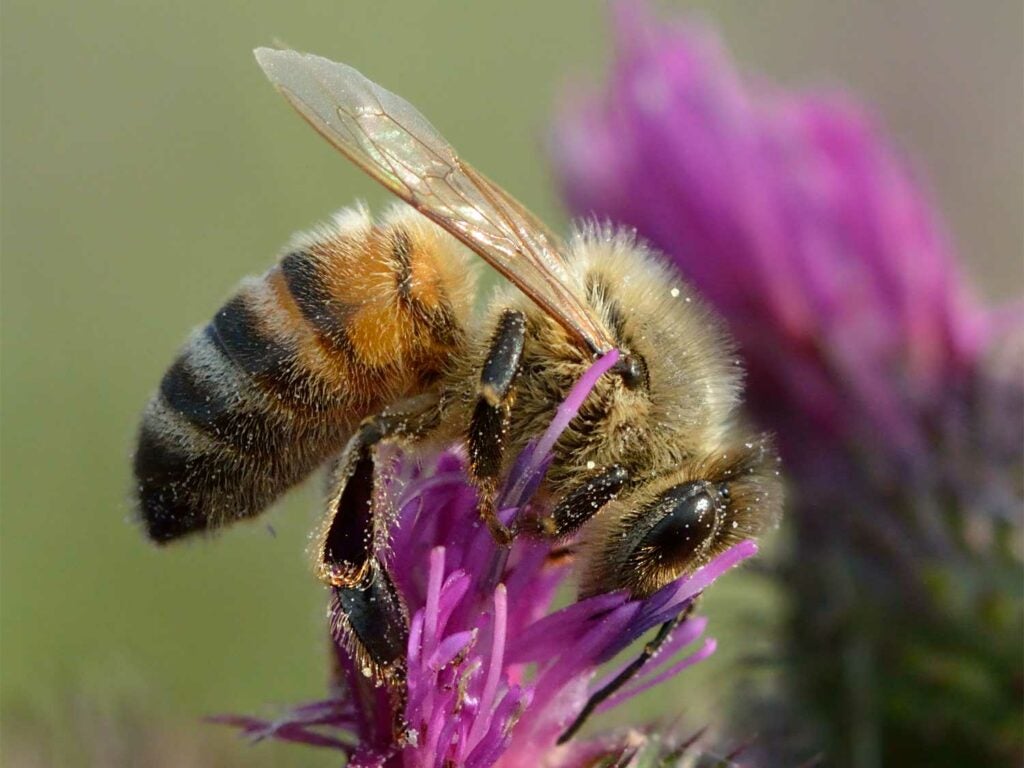 While a sting from a honey bee isn’t particularly painful, in one set of circumstances, it will have you begging for mercy.

The ubiquitous honey-maker is found on every continent but Antarctica and has even flown into space with an assist from NASA. A honey bee can sting only once since it loses its stinger in the process, and the typical nick rates a modest two on Schmidt’s scale: “Burning, corrosive, but you can handle it.” But their penchant for seeking sweet nectar anywhere they can find it (including sugary drinks) creates a special case worthy of a top-ten rating.

“It’s crawled into your soda can and stings you on the tongue. It’s immediate, noisome, visceral, and debilitating. For ten minutes, life is not worth living.” 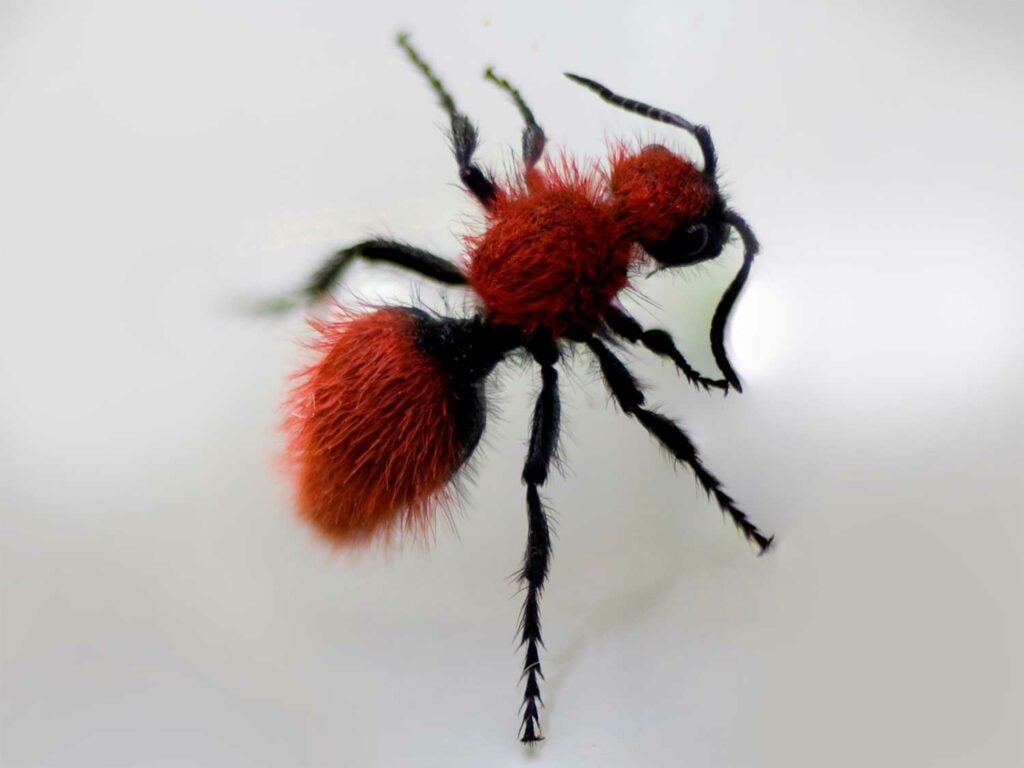 Velvet ants aren’t very toxic to humans or other mammals, but they still produce a strong, painful sting.

This insect’s common name and soft, red fur might make it seem like a cuddly character in a children’s storybook, but its nickname—cow killer—puts that misconception to rest. Velvet ants are actually wingless female wasps, and their fearsome stinger (the longest, relative to body size, of any stinging insect) is just one of many defense mechanisms. Cow-killer venom is not especially toxic to mammals but is renowned for its ability to cause intense agony and eternal regret.

“Explosive and long-lasting. You sound insane as you scream. Hot oil from the deep fryer spilling over your entire hand.” 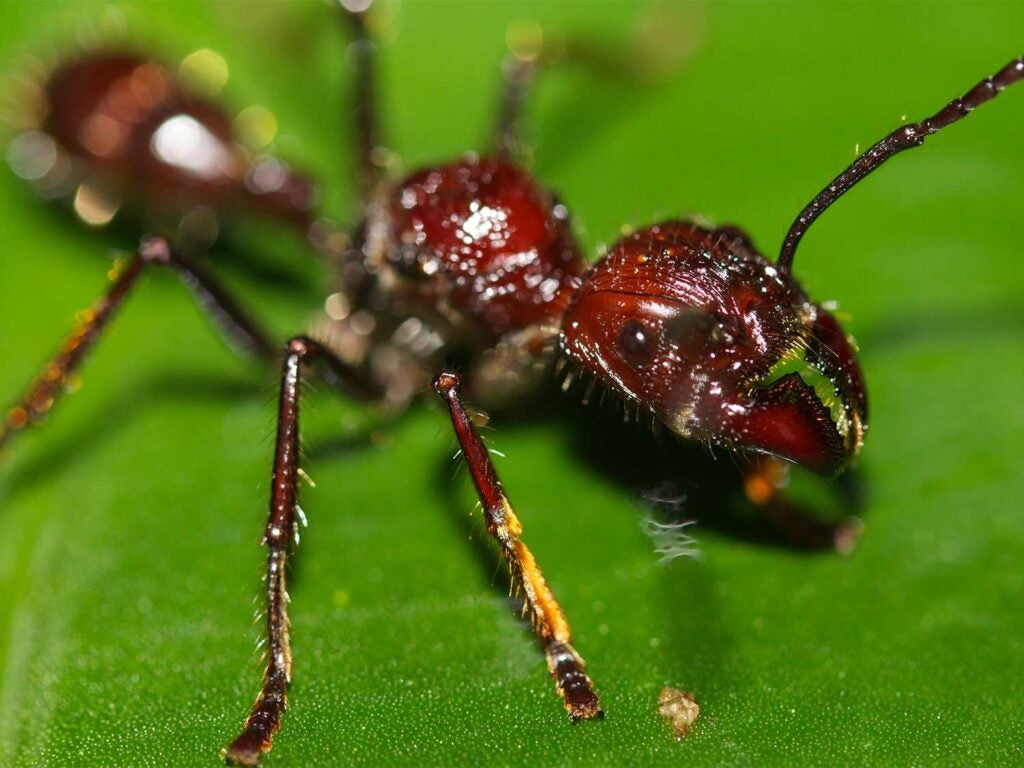 A sting from a bullet ant feels like getting shot, and the pain can last for hours.

Central America’s most dreaded insect earned its name from the fact that victims liken its bite to being hit by a bullet. Brazilian indigenous tribes subject teenage boys to bullet ant stings as a rite of passage, and Marvel tapped into its ferocious reputation for the Ant-Man movie. Stings cause relatively little damage at the wound site, but the torment is searing, excruciating and can come and go for hours.

“Pure, intense, brilliant pain. Like walking over flaming charcoal with a 3-inch nail embedded in your heel.” 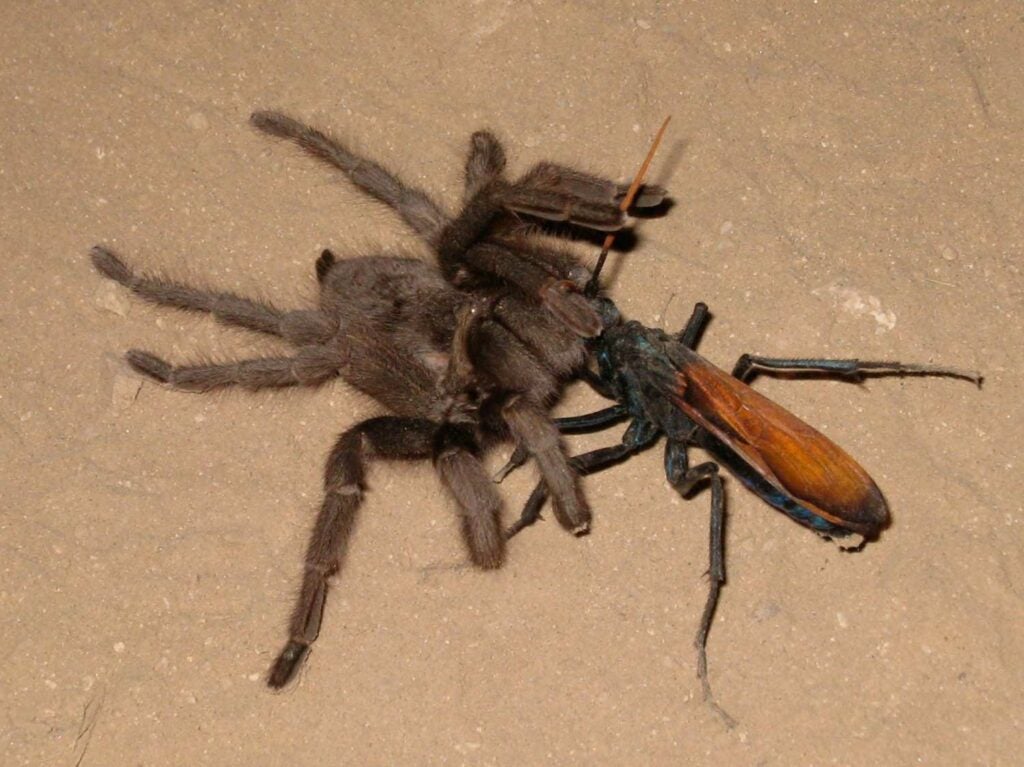 It doesn’t happen often, but a sting from a tarantula hawk is among the worst in the world.

“Stung by a tarantula hawk? The advice I give is to lie down and scream,” Schmidt says. Tough enough to attack, paralyze, and drag a hairy, poisonous tarantula up to eight times its weight, the two-inch-long tarantula hawk rarely stings without provocation. The wound can persist for a week, but the agony rarely lasts more than five minutes. The story? One that you’ll be telling your grandkids.

“Blinding, fierce, shockingly electric. A running hair dryer has just been dropped into your bubble bath.” 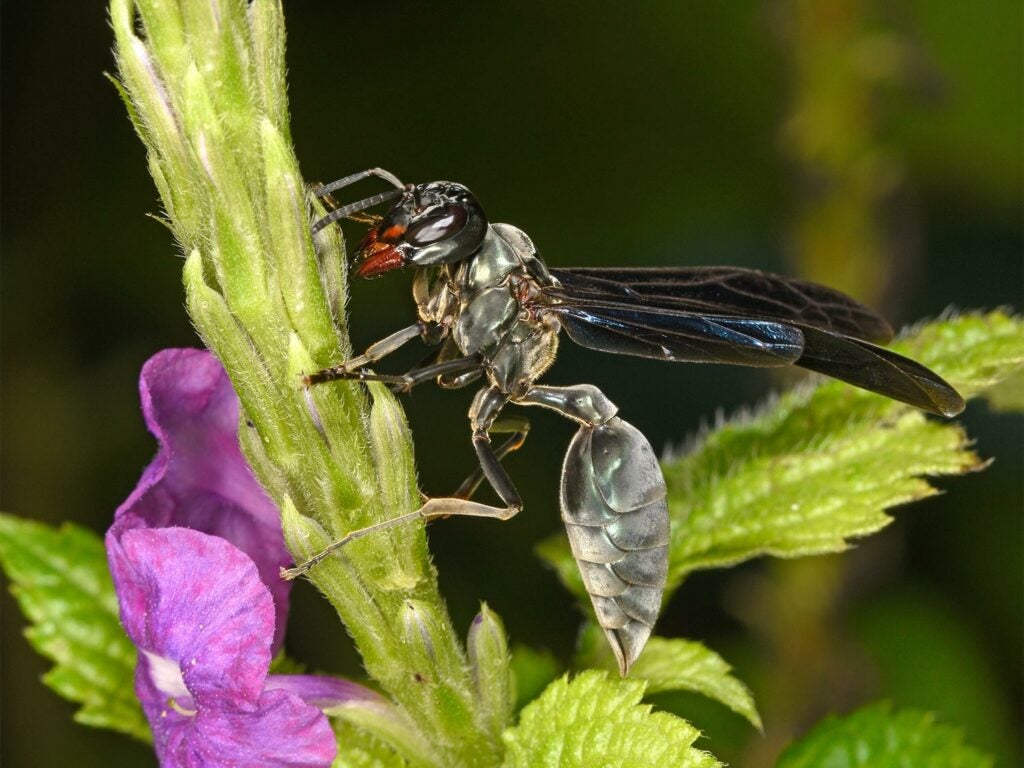 An angry swarm of warrior wasps will undoubtedly land you in the hospital.

This large paper wasp is incredibly fast and aggressive and earned its name because of a unique defensive display. Whenever their nests are threatened, warrior wasps beat their wings in unison producing a rhythm that sounds eerily like troops on the march. Their massive jaws, one-inch-long bodies, and iridescent wings complete the intimidating picture. But the real threat comes from the potent sting, which produces sharp, shooting pain and swelling that often requires medical attention—especially when delivered in multiples by alarmed swarms.

“Torture. You are chained in the flow of an active volcano. Why did I start this list?”