Bats can adapt by switching senses, but that's not good enough 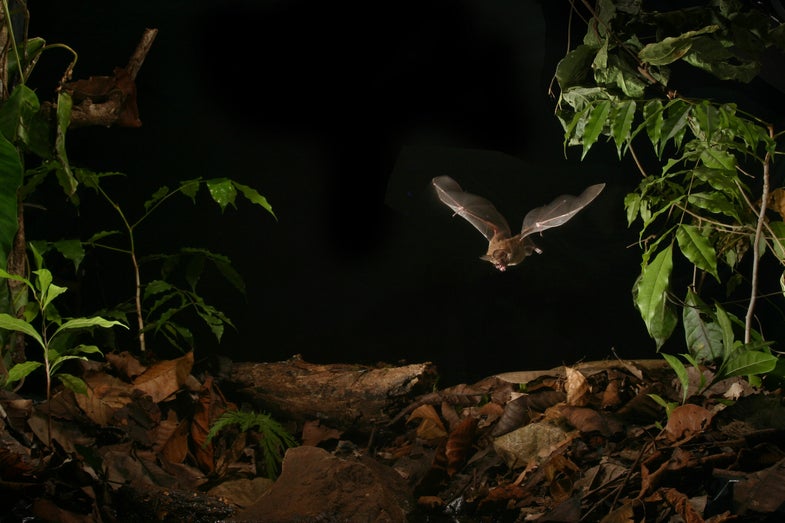 Rising above the sounds of crickets chirping, the distinctive whining croak of a male túngara frog can capture the attention of a big brown fringe-lipped bat almost immediately. These frog-eating bats live in forests from southern Mexico to Bolivia, and rely heavily on eavesdropping on their prey. But when the mating calls of frogs are masked by a noisy environment, the bats are forced to use alternative cues to track down their dinner.

Instead of waggling their heads and listening for the frogs’ calls, bats start relying on echolocation to hunt when man-made noise becomes too deafening. The switch allows bats to change how they gather information about their surroundings, but it also increases the time they take to attack prey, according to a study that will be published tomorrow (Sept. 16) in the journal Science. That’s bad news, says senior author Wouter Halfwerk, an animal ecologist at VU University in Amsterdam, because as cities continue to grow and anthropogenic noise increases, an entire population of bats may have to change not only how they find food, but also how much they can forage.

Normally, the bat’s hunt goes like this: first it listens to its prey, waiting to overhear the túngara frog’s mating displays, then it assesses the frog’s size, and finally when it knows enough about the frog’s palatability and precise location, the bat swoops down and swallows the frog whole.

To see how the bats would adapt their hunting strategies in the presence of man-made noise, Halfwerk and his team studied how 12 wild-caught bats located and attacked two robotic frogs. One frog only made the mating sounds, while the other also had a balloon attached that inflated noticeably when it croaked, mimicking the movement of a vocal sac. The researchers found that, when they added background noise that masked the frog’s mating sounds, bats attacking the motionless robot took twice as long as bats that located and attacked the robot with the moving vocal sac. In fact, the robot without the moving sac was so hard for them to detect that the bats chose the frog with the balloon sac 75 percent of the time. That’s because they stopped relying completely on their hearing to detect the frogs. They used more echolocation instead, which helped pinpoint where the movement was coming from.

“This shows that bats are much more flexible than we previously thought,” says Halfwerk. “They can actively switch which sensory cues they use, which is very similar to what humans do when we’re trying to talk to someone in a noisy environment–we start paying attention to their lip movements as they speak.”

But deciding which cues to use in a given environment may not be enough for bats, which are particularly vulnerable to noise, says Jinhong Luo, a bat scientist at Johns Hopkins University. “The bats are doing worse when exposed to noise despite their efforts to adapt. And the longer it takes them to detect prey, the fewer frogs they may be able to hunt.”

Human noise from city traffic and industries is only bound to increase in the future. Nearly four billion people in the world already live in cities, and the United Nations estimates that number will increase to more than six billion by 2050. By studying how animals like bats cope with these changes, Halfwerk hopes that scientists can better understand how the species will fare in the future. “We know that evolution is faster in anthropogenic environments, and if bats are behaviorally flexible they may just be able to adapt over time,” he says.