Wildfires can hurt you from miles away

Only one kind of mask can truly protect you from the smoke. 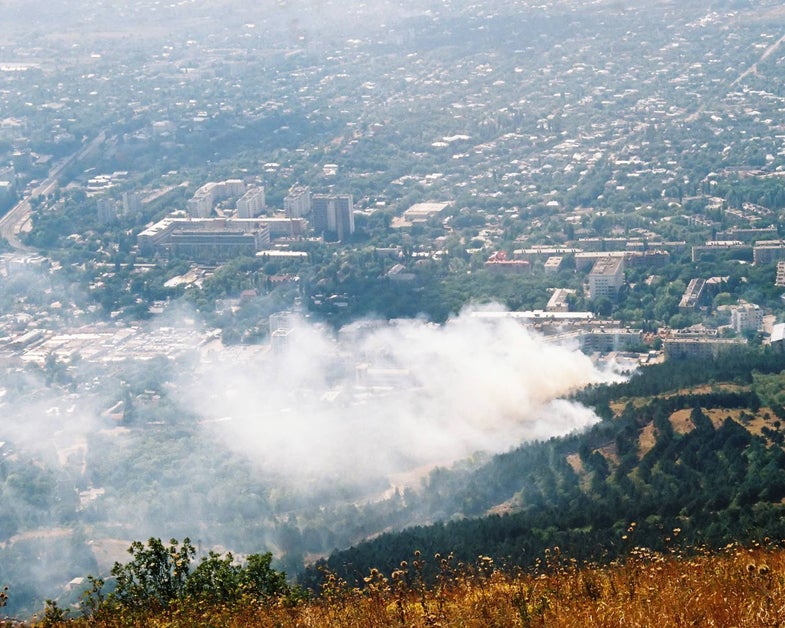 As wildfires ravage large sections of both Northern and Southern California, smoke continues to grow and blow into residential neighborhoods, parks, and cities. In both affected areas, officials have released air quality warnings, urging residents to protect their health.

Smoke from the Camp Fire that started in Paradise in Northern California has caused nearly the entire Bay Area as well as parts of the Central Valley to experience dangerous drops in air quality. Southern California’s Woolsey fire is causing similar smoke cascades throughout the region.

While we don’t know all the health effects of smoke inhalation, researchers do know that certain populations are at a higher risk, and that everyone can take precautions: Most importantly, stay indoors.

Why wildfire smoke can be dangerous to your health

The size of the particles is key. The smaller the particle size, the more dangerous they are. Particles smaller than two and a half microns across—commonly referred to as Particulate Matter (PM) 2.5—are common in wildfire smoke. At this size they can travel further in the respiratory system, reaching the lungs and causing respiratory distress like coughing, shortness of breath, and even asthma attacks.

Fine particles of this size are particularly concerning as they can travel far distances. So the smoke that reaches sections of the Bay Area, for example, will likely have these particles.

What’s the best thing to do when you are in an area with smoke?

The greatest thing you can do for yourself is to limit your exposure. The CDC recommends staying indoors and keeping the air inside your home as clean as possible. Using a freestanding air filter can help. Vacuuming, which is typically thought to keep things clean, is actually counterproductive in this case—in the process of sucking up larger debris, it actually stirs up the tiny particles in surrounding areas and makes you more likely to inhale them.

Do masks work? Which one should I use?

Masks work, but having the correct one (and wearing it properly) is key. An everyday dust mask will only trap those large particles, and still allow the PM 2.5 ones that can reach your lungs and respiratory pathways in.

An N95 mask, when worn according to its instructions, can trap these tiny particles and prevent them from reaching your lungs.

Are there risks for long term effects from fire smoke inhalation?

There have been many good studies looking into the immediate effects of inhaling wildfire smoke. They’ve found that young children, the elderly, and those with pre-existing respiratory health conditions like asthma, COPD, bronchitis, and pneumonia are particularly vulnerable to these effects.

The long-term fallout of this environmental exposure is harder to predict, and most studies on the subject, including this recent 2018 review, conclude that more research is necessary. But one thing is pretty clear: less exposure is better.