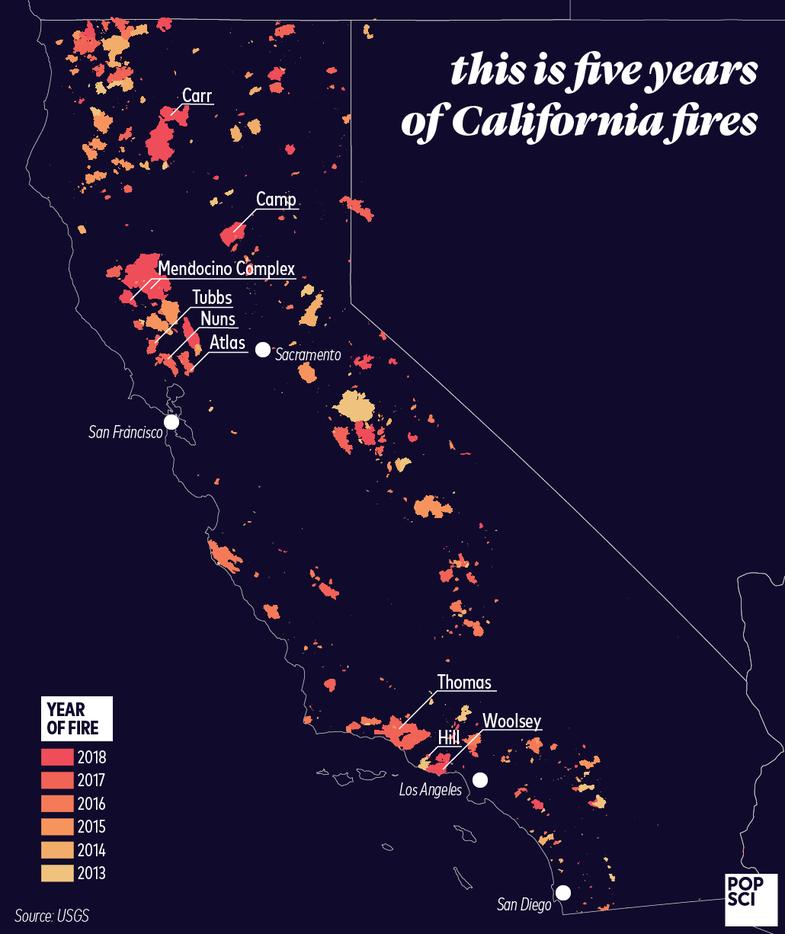 In August we wrote that California was experiencing it’s largest fire on record and created a map to show just how much of the state had burned in the preceding five years. Now, just a few months later, we’re updating because November has brought the Golden State its deadliest and most destructive fires ever.

Even back in August this was already the worst fire season since 2008. Now blazes have destroyed the entire town of Paradise, countless beach homes in and around Malibu, and a record 63 deaths. 600 are still missing. The Camp, Hill, and Woolsey fires have burned more than 244,890 acres collectively so far.

Unfortunately, a lot of this has become a regular occurrence for Californians. The state has been so parched that massive fires pop up all the time, and climate change isn’t helping. In the last few years huge swaths have dried up, burst into flames, and left blackened land to try to recover.

Most of California’s hottest fires have burned since 2000—13 out of 20 total—as higher temperatures have made wildfires increasingly likely and destructive. Just in the last five years, this is how much of the state has burned.

It can be hard to get a sense of just how much of the state those splotches take up, so here’s a rough idea. CAL Fire estimates how many acres have burned each year, both in their own jurisdictions and those covered by the U.S. Forest Service. If we add up the total acreage from 2013 through 2018 we get 5,395,088 acres. California itself is about 100 million acres, which means that roughly 5.4 percent of the state has burned just in the past five years. That may not sound like that much, but as the map shows, the same areas tend to get hit again and again. Parts of the state are complete desert, while others are snowy mountains, so it’s the bits in between that tend to see fires. And unfortunately, that’s also where the people tend to live.

“California is built to burn, and burn explosively,” Stephen Pyne, a fire historian and professor at Arizona State University’s School of Life Sciences, told Popular Science. The dry heat, the droughts, the expanses of land that actually rely on regular wildfires to regenerate—it’s a deadly recipe.

Of course, it’s not just the west coast. Wildfires burned all over the world last year. South Africa, New Zealand, Russia, Canada, and Brazil were all ablaze at various points.

Officials say they’re hoping to contain the fires by the end of the month. The Hill fire is already 85 percent contained, but the much larger Woolsey and Camp blazes are only about 69 and 45 percent contained respectively, even after razing many thousands of homes and buildings. But they certainly won’t be the last to rage through California. If you’re in the vicinity or in a fire-prone area, you should check out these tips to stay safe. Unfortunately, global warming will make it harder and harder to prevent and contain fires—until we address that issue, we’re in for a lot more burning.