Despite accusations, the state has excellent manage policies—it's just also built to burn. 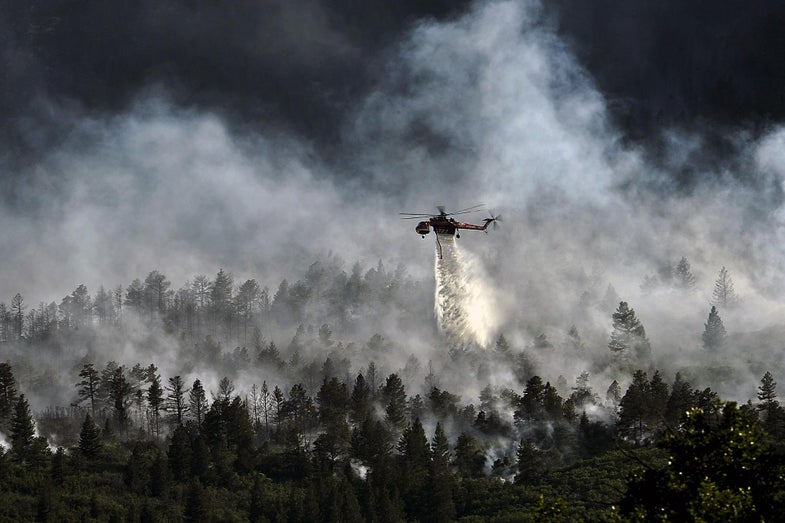 As catastrophic fires rage in California, President Trump looked for someone to blame. In a series of tweets posted Saturday and Sunday, Trump faulted “gross mismanagement of the forests” for the wildfires, which have killed at least 31 people. The president also threatened to cut federal funding for firefighting efforts.

Firefighters immediately pointed out errors in Trump’s assertions. The Woolsey Fire started not in a forest but on a hillside near Simi Valley before spreading to suburban communities, while the Camp Fire is burning in an area thinned by fire 10 years ago. Forest management didn’t cause these blazes and California is considered a leader in Forest management on private lands.

“His comments are reckless and insulting to the fire fighters and people being affected,” said Harold Schaitberger, General President of the International Association of Fire Fighters, in a statement responding to Trump’s latest tweets.

In the first half of the twentieth century, wildfire policy followed a very simple logic: all forest fires are bad and should be doused as quickly as possible. This mentality stemmed from the destructive fires of 1910 known as the Big Burn that killed 86 people and ignited 2.5 million acres across northern Idaho and western Montana, turning “trees by the millions” into “exploding candles.” Fire suppression activity after the Big Burn was so aggressive that the Forest Service had a policy mandating all reported fires be put out by 10 a.m. the next day.

Towards the mid-20th century, however, more researchers began to realize what Native Americans knew all along: that controlled fires were a natural part of the ecosystem. The “suppress at all costs” mentality was eventually replaced with managed or prescribed burnings designed to prevent larger scale, uncontrollable fires instead of fighting them once they’d already begun.

And while the legacy of America’s old fire suppression strategy resulted in the buildup of excess flammable brush, there are two other key reasons why California is the perfect tinderbox. One is that the state has a growing number of people living in or near fire-prone areas.

The second is that California has a naturally dry climate, made worse by climate change and Trump’s disregard for climate policies.

Already, Trump has dismantled several key environmental protections that limit greenhouse gases from oil and gas operations, power plants, and cars. The Environmental Protection Agency under Trump also proposed to take away California’s right to regulate tailpipe carbon emissions standards in cars that are more protective than federal standards. These moves would worsen climate change and contribute to the state’s propensity to go up in flames.

A long-term trend of warmer summers and drier falls has helped desiccate California’s vegetation to the perfect kindling, said Daniel Swain, assistant researcher at the University of California-Los Angeles’ Institute of the Environment and Sustainability, in a Twitter thread rebuttal.

If Northern California had received anywhere near the typical amount of autumn precipitation this year (around 4-5 in. of rain near #CampFire point of origin), explosive fire behavior & stunning tragedy in #Paradise would almost certainly not have occurred. (1/n) #CAfire #CAwx pic.twitter.com/2LBKjSVBMF

The U.S. Forest Service estimated in 2015 that climate change has led to fire seasons that are on average 78 days longer than they were almost 40 years ago.

Meanwhile, Trump’s threat to suspend funding would cripple firefighting efforts when they’re most needed. The U.S. Forest Service spent more than $2 billion last year to put out fires, a sharp increase that “means we have to keep borrowing from funds that are intended for forest management,” said U.S. Secretary of Agriculture Sonny Perdue. “We’ve got great people at the Forest Service and great procedures and processes in place…but if we don’t have a dependable funding source in place, then we’ll never get ahead of the curve on fighting fires.”