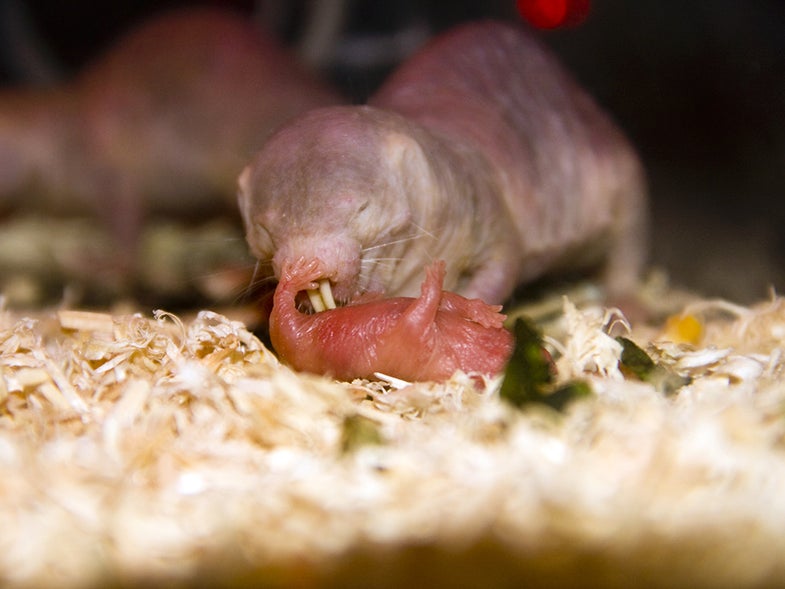 Have you ever seen a picture of a mother dog caring for an unusual baby, like a kitten? This sort of animal adoption story is an example of a phenomenon known as alloparenting: care provided to offspring that are not genetically related.

We humans may toss around the phrase “It takes a village to raise a child,” but there are cases in the animal world where this is more literally true. Naked mole-rats, wrinkly mammals of the East African desert, offer an example of the whole “village” cooperating to raise offspring.

Each individual naked mole-rat has a specific job. Like in a honeybee hive, a naked mole-rat colony has one queen, whose job it is to reproduce. There are just a few sexually reproductive males, who mate with the queen. All the others, both male and female, are either soldiers that protect the colony or workers that forage for food, dig tunnels and care for the queen’s offspring, known as pups.

Until now, no one had a physiological explanation for why naked mole-rat workers care for pups that aren’t their own. Normally when a mom gives birth, estrogen levels are high and progesterone levels drop, resulting in maternal behaviors such as feeding or grooming. In many unusual adoption stories, like that of the mother dog caring for a kitten, the adoptive mom will have recently given birth to her own offspring—meaning her hormone levels have left her primed and ready to care for offspring, even those that aren’t her own.

As a biologist, I’m interested in understanding how chemicals in the body can cause changes in behavior. In my lab, I study the role of neurotransmitters, the brain’s chemical messengers, in vocal communication.

Recently, researchers in Japan noticed that worker naked mole-rats were faster to respond to pup calls and spent more time in the area where the calls originated after a queen gave birth. Naked mole-rats can vocalize to communicate, but their hearing is poor.

It looked like something about the queen’s reproductive stage was affecting the workers’ behavior. But what was going on? It’s unlikely they were communicating solely through vocalizations due to their poor hearing. Could there be some kind of chemical communication at play?

Since naked mole-rats commonly eat poop to get any leftover nutrients, the researchers wondered whether the queen’s pregnant poop might contain a chemical that, when eaten, would affect the workers’ behaviors. Maybe pooped-out estrogen from the queen is a way for her to communicate with the workers, preparing them for parenthood.

They designed a series of experiments to investigate whether eating a pregnant queen’s estrogen-rich poop would make female workers more responsive and attentive parents to the colony’s pups.

First, the researchers fed worker naked mole-rats poop from pregnant and non pregnant queens. They wanted to see if there would be differences in how the two groups of workers responded to pup calls. And indeed, naked mole-rats that ate the pregnancy poop were more responsive and attentive parents than those fed regular queen poop.

To be sure the increases in workers’ estrogen levels stemmed from the hormones in the pregnancy poop, and not just from being around a pregnant queen, the researchers mixed up a batch of “artificial poop.” They formulated the poop with estrogen and progesterone concentrations similar to what they’d found excreted by the pregnant queen. Sure enough, workers’ estrogen concentrations rose after they dined on this poop cocktail. Now the researchers were confident that the estrogen was transferring from the queen to the workers via her pregnant poop.

The research team then wanted to nail down the connection between the hormones and the behavior. So, they fed workers either normal nonpregnant queen poop, or nonpregnant queen poop supplemented with estrogen. Workers that ate the estrogen-enhanced poop showed levels of responsiveness and attentiveness to pup calls similar to those that had originally inspired the researchers to pursue these experiments.

It’s important to note that this study was carried out in a colony of naked mole-rats born and raised in the lab. It would be interesting to repeat this set of experiments in the field, and see if estrogen in poop causes the same behavioral changes in wild naked mole-rat workers.

The changes in the behavior of workers after ingesting estrogen-laden poop suggests that the hormone not only served as a way to make the naked mole-rats better parents, but also as a way for the queen to communicate with her workers. In this way, the estrogen in the queen’s poop works on two levels: It gives workers a heads-up about the queen’s pregnant state and also improves the workers’ response to pup communications.

Many studies on chemical communication between mammals focus on pheromones: odor signals secreted by other individuals that affect one’s own behavior. Scientists have primarily regarded estrogen as a hormone that affects the behavior of the individual producing it. However, this study provides insight into how estrogen produced by others can not only be a means of communicating, but also a factor that influences one’s own behaviors.

*Gina Mantica is a Ph.D. Candidate in Biology at Tufts University. This article was originally featured on The Conversation. *