The spookiest things we learned this week

Our editors scrounged up some truly frightful facts. 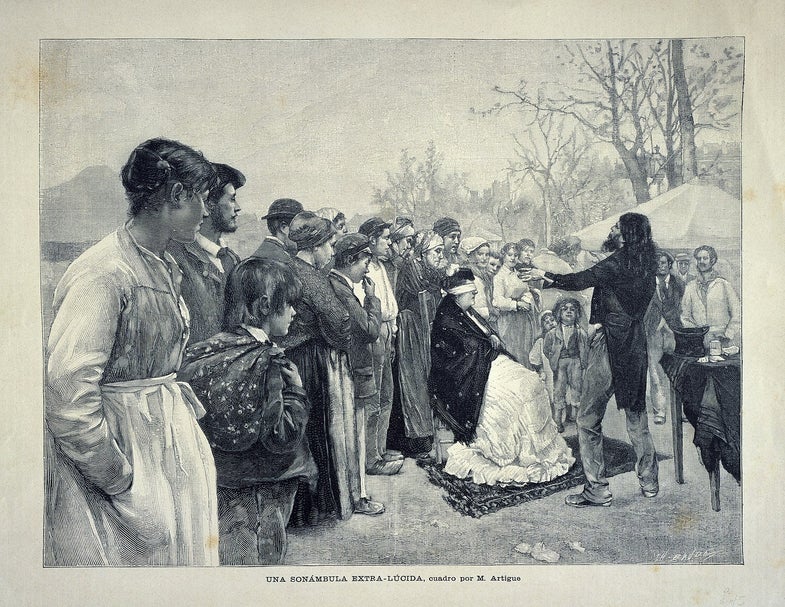 A pair of mind-readers giving the sort of performance that may have led to one man's demise. Wellcome Images
SHARE

Fact: Fetuses can turn to stone—and stay inside their mothers for decades

A few years ago, a 75-year-old Moroccan woman named Zahra Aboutalib went to the hospital with abdominal pain. Scans revealed a strange mass, and eventually, doctors figured out the shocking source of her pain: a baby she conceived 46 years before. You can learn more about Aboutalib’s incredible ordeal in this documentary about her, but as shocking as her condition was, she isn’t alone: There are some 300 cases of lithopedions, or stone babies, in the historical record. They’re actually described in medical literature as early as the 10th century.

A stone fetus sounds kind of terrifying, but the phenomenon is actually rather amazing. This generally occurs when an abdominal ectopic pregnancy—a fetus growing inside the abdominal cavity instead of within the uterus—is not reabsorbed by the hosting body, but instead treated as a foreign invader and covered with a calciferous substance. The result is a fetus covered in a protective layer quite literally as hard as rock. Patients like Aboutalib can go for years or decades ignoring the resulting mass, and some of them have even had healthy children while continuing to carry the lithopedion.

Meet the Iberian Ribbed Newt. Sure, it looks cute, but behind that adorable amphibian face is a consummate survivor. And if you try to threaten its life, this relative of the salamander will go to great lengths to take you down with it.

When threatened, it turns its own body into a weapon, shoving its ribcage forward along its spine so that the sharp ends of its ribs poke out through the skin. As if bristling with bony needles wasn’t enough, it also starts secreting a poison that coats its skin and the ends of those points, delivering a deadly dose to smaller critters.

But that’s not the coolest thing. When it finds a moment of peace, the newt relaxes its ribcage back into the normal position—and the wounds heal themselves right back up, making this amphibian a real-life Wolverine.

Washington Irving Bishop lived fast and died young. Born into an occult-loving family in 1855, he became a famous “thought-reader,” traveling around under the stage name “The Mentalist.” His performances were only heightened by his penchant for passing out—often on stage, in the middle of a performance. In these strange trances—called “cataleptic fits”—he would become immobile, and stop responding to any stimuli. Naturally, he carried around a card in his pocket that said something to the effect of, “I may look dead, but I swear I’m not, so please don’t autopsy me.”

Unfortunately, his warnings were not heeded. During an infamous performance in 1889, he slipped twice into such a trance. And he failed to emerge from the second—at least not in a timely enough fashion for the doctors of the day, who autopsied him the next morning.

Today, Bishop’s body is interred among other prominent 19th-century characters at Green-Wood Cemetery in Brooklyn. His tombstone, while degraded by rain and sun, is notably emblazoned with the words “THE MARTYR” and an accompanying statement from his mother, who believed for the rest of her life her son had been killed by his autopsy.

I have always been fascinated by the phenomenon of unidentified sounds. That includes ones like the Taos Hum, where a percentage of residents in the town of Taos, New Mexico hear a faint sound that scientists have been unable to identify the source of. There’s also NOAA’s list of unidentified deep ocean sounds, only some of which have been solved. So for this week’s Halloween episode, I went down a Wikipedia spiral into unidentified sounds to emerge with this phrase: “Exploding Head Syndrome.”

The condition, as strange as it sounds, is completely legitimate. By piecing together case reports from over the years, doctors have figured out that people with the syndrome hear a sound akin to an explosion as they are falling asleep or waking up. While it doesn’t cause any pain, the condition is associated, in many cases, with enough fear and terror to send some sufferers to the emergency room.

In this week’s episode, I explore the origins of the condition, why it’s definitely real, and why some doctors believe it’s far more common than is reflected in the medical literature. I am definitely a hypochondriac, but I also definitely think I’ve experienced exploding head syndrome. Have you?

If you like The Weirdest Thing I Learned This Week, please subscribe, rate, and review us on iTunes. You can also join in the weirdness in our Facebook group and bedeck yourself in weirdo merchandise from our Threadless shop. We’re about to go on a short hiatus while we prep for our second season, but keep an eye on your podcast feed for bonus episodes—and announcements about our next live show!