Dry cleaning is dirtier than you think. Meet the neurotoxin hiding in your winter coat. 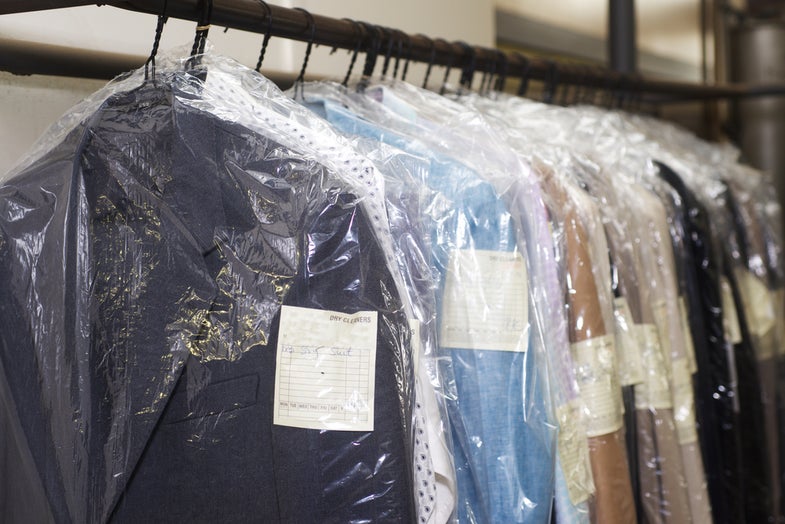 Dry cleaning things hanging in a row on a hanger. (R)OLEG MURAVIEV
SHARE

A cross-country tour of dry cleaners and local laundromats isn’t most people’s dream vacation. But Diana Ceballos, a research scientist in Harvard University’s environmental health department, is always angling for a chance to peek behind the counter.

An expert in the industry’s occupational health hazards, Ceballos has worked with dry cleaners in Seattle, where 80 percent of operations are owned by Korean families, and visited Tide-branded brick and mortars in the midwest that offer 24-hour concierge fabric cleaning services. (“They’re very fancy!” she says.)

Big or small, she knows each storefront serves the same core purpose: to take in well-loved fabrics, and return freshly-pressed linens, garments, and rugs free of stains. The problem is, despite its name, dry cleaning is actually a very dirty business—capable of poisoning the people who work the machines, and leaking toxic chemicals that spread into the surrounding community.

Scientists have known for decades that perchloroethylene, the industry’s chemical centerpiece, is dangerous. In the 1970s, early studies suggested that PERC, as its more commonly called, was a carcinogen. Mice that ate the substance and inhaled its vapors were more likely to develop liver tumors. While it’s difficult to link a substance definitively to cancer, the American Cancer Society describes epidemiological studies in humans that show workers regularly exposed to PERC have increased rates of lymphomas and esophagus, kidney, cervix, and bladder cancers.

The substance’s rap sheet has only grown. Today, it’s a known neurotoxin. The U.S. Occupational Safety and Human Safety agency, or OSHA, links acute exposure to PERC is linked to dizziness, blurred vision, and loss of coordination. Something as mild as picking up a PERC-cleaned garment that wasn’t properly dried can temporarily trigger these symptoms. Long-term exposure can even trigger mild memory loss.

The use of PERC can have also profound environmental effects. A single spilled drop can push through the concrete foundations of a dry cleaning facility, past layers of rock and soil, all the way down to groundwater reservoirs. There it sits, waiting to be slurped up, or, more likely, shifted somewhere it can evaporate into the air, or off-gas toxic byproducts.

Despite PERC’s well-documented destructive ability, the substance is still widely used. An estimated 70 percent of dry cleaners still have a PERC machine. That’s partly because dry cleaning has always been a dangerous business, and PERC seemed, at least for a time, like an acceptable risk. Early methods for cleaning clothes were petroleum-based; kerosene, gasoline, and benzene were all in the mix. Frequent fires and explosions pushed dry cleaners far outside of town. “When it was comparing the dry cleaning shop completely burning down, even these toxic materials seemed like a very reasonable way to go at the time,” Ceballos says. Upon its debut in the 1930s, PERC must have seemed like a modern marvel. Cleaners could leave their turpentine behind, and move back into town near customers. Many set up shop in the ground-floor or basement of residential buildings.

But the chemical’s dominance is really underpinned by the simple fact that PERC works. When you take your lucky shirt to the dry cleaner, someone on staff will first evaluate the material, says Steve Whittaker, a public health researcher with King County’s local hazardous waste management program in Washington state. If it’s cotton or another fabric that can be washed in water, they’ll divert the garment to the shop’s industrial-strength washing machine. (Believe it or not, Whittaker says, that actually happens a lot.) If it’s a material that can’t be laundered, it goes in the dry cleaning queue.

Dry cleaning is so named because there’s no water involved in the process. But it still involves liquids—lots and lots of liquid PERC. “The first thing they’ll do is to look and see if there are any spots on it: grease spots, blood or rust, or any other bodily fluids on it,” Whittaker says. If they find something, the cleaner will use a spot-cleaning product specific to the stain. Then, they’ll run the entire garment through a chemical bath in a designated PERC machine, which is especially good at handling grease. “If you imagine a home front-loading washing machine, it’s just like that, but with perchloroethylene instead of water,” Whittaker says. From there, workers dry, press, and wrap the item in plastic. The spotless product is ready for its owner to retrieve.

PERC may be effective, but it could—and should—have been tackled by legislators long ago. Unfortunately, most consumers don’t think about what’s going on behind the scenes, so long as their spaghetti stains are efficiently removed, which means political will is lacking. Since the 1990s, PERC has been subject to increasing regulations, but is not yet banned. (California, which is phasing the chemical out entirely, is one exception.) “Things are being done to address the issue, but the truth is, just like with any chemical, there’s a big lag,” Ceballos says. “We have to create enough signs that something is bad for you before action is ever taken.

Taken together, these social and economic factors enabled PERC to become, to borrow a phrase, “too big to fail.” Dry cleaning is a difficult business. Margins are low, and family-owned shops are often barely making ends meet. For most, replacing functional PERC machines with newer ones, which cost $40,000 to $60,000, would be difficult if not impossible. Add to this that fact that many agencies don’t offer information on the hazards of PERC in Korean, the language many dry cleaners in America read and speak, and the challenge of overhauling the nation’s roughly 33,000 dry cleaning shops becomes clear.

For years, experts and activists have been looking for a replacement for PERC—something just as effective, but much less toxic. There are a handful of dry cleaning alternatives on the market, but each has distinct problems, according to Whittaker. One strategy, called hydrocarbon, has fewer negative effects on human health, but creates toxic waste. Solvon K4, a German product, looked promising, but Whittaker says significant gaps in the literature on its health effects remain. It also creates environmental waste considered even more toxic than the byproducts of hydrocarbon. Liquid carbon dioxide, while good at removing stains, is prone to leaking. And 1-bromopropane, the only alternative to work well in an existing PERC machine, is like PERC in one other unfortunate way: it’s neurotoxic.

That’s why Whittaker’s team in King County, Washington is putting its time and energy into promoting professional wet cleaning. Historically, many fabrics couldn’t handle water without damage or shrinkage, but new machines have changed that—making water as viable a cleaner as chemical baths like PERC, without all the harmful side effects. “I will have to admit that if you’d asked me three or four years ago whether professional wet-cleaning was a viable alternative to perchloroethylene, I would have been very skeptical,” Whittaker says. “But what has happened recently are just huge advancements in the technology.”

Smart wet cleaning machines can precisely time washing and drying, ensuring wool, silk, and other sensitive fabrics are free from spots and damage. The water-based systems also allow operators to use safer detergents and solvents, derived from things like fungi microbes instead of PERC. Whittaker once watched a dry cleaner demonstrate his new machine on a fancy Armani suit. He held his breath the whole time, he tells me, but the suit came out as good as new. Wool coats and delicates seem to fair equally well.

To make these water-based systems more accessible to cash-strapped cleaners, King County has created a grant program that provides $20,000 of the cost of a wet cleaning system. That’s roughly one-fourth to one-half of the total cost of replacing a PERC system. “All of our work is grounded in the principles of equity and social justice,” Whittaker says. Local companies have found success paying off remaining loans with money saved on their utility bill. PERC may be water-free, but dry cleaners can run up water bills in the thousands of dollars every month trying to cool their aging machines. And Ceballos reports business owners seem happier knowing their new machines are better for their health, and their community.

When Ceballos got her own clothes cleaned at a Tide-branded store a few months back, she was delighted to see one item came back with stains. A note attached to the garment said that the facility could have removed the stain, but only if they used harsher chemicals linked to environmental and human health hazards. Most people would have been miffed, but Ceballos saw it as a sign of progress. “It’s kind of educating the consumer,” she says. In that note, the true cost of dry cleaning was clear.

Balancing the needs of local business owners with soil, water, and air quality concerns is no easy task. But Ceballos, Whittaker, and their colleagues across the country remain motivated. They want to protect dry cleaners today, and stop future environmental disasters before they start. Still, Ceballos says, when it comes to PERC exposures past, “I think the harm will follow, unfortunately, for decades.”

Update: This story was updated to reflect King County offers a grant program, not a loan program.