It’s raining frogs: a brief look at the planet’s weirdest weather ever

From falling frogs to giant hailstones. 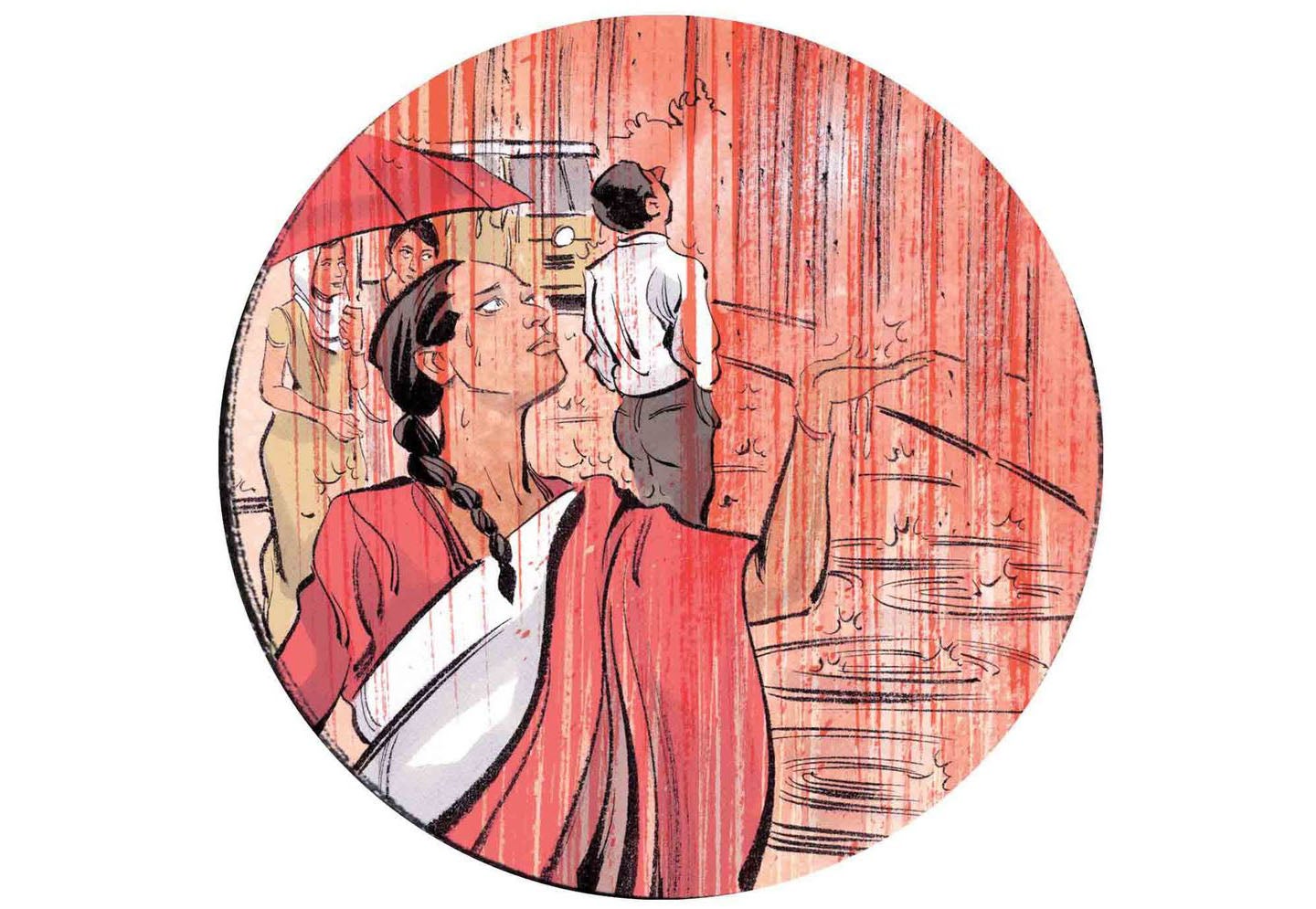 It happened in Kerala, India. Illustration by Kagan McLeod
SHARE

Sure, the sky looks fine now. But just wait ’til the weather turns…

We all accept rain, wind, thunder, and lightning as regular occurrences. But the same natural patterns that cause normal forecasts can also result in bizarre, terrifying, and downright mythical phenomena. Here are some of the strangest effects of extreme weather that humans have ever observed. 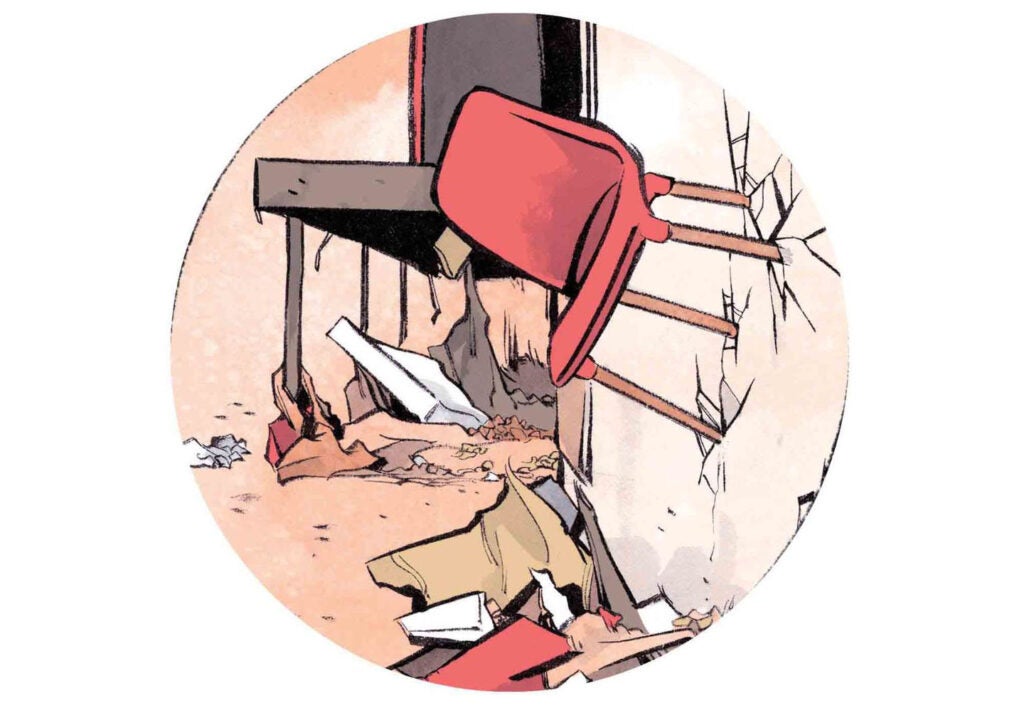 It happened in Joplin, Missouri.

A mile-wide tornado that hit Joplin, Missouri, in 2011 flattened neighborhoods into piles of wood and rubbish—and embedded a kitchen chair deep into the exterior wall of a store. Hurled by winds over 200 mph, the legs hit the stucco like flying spears. 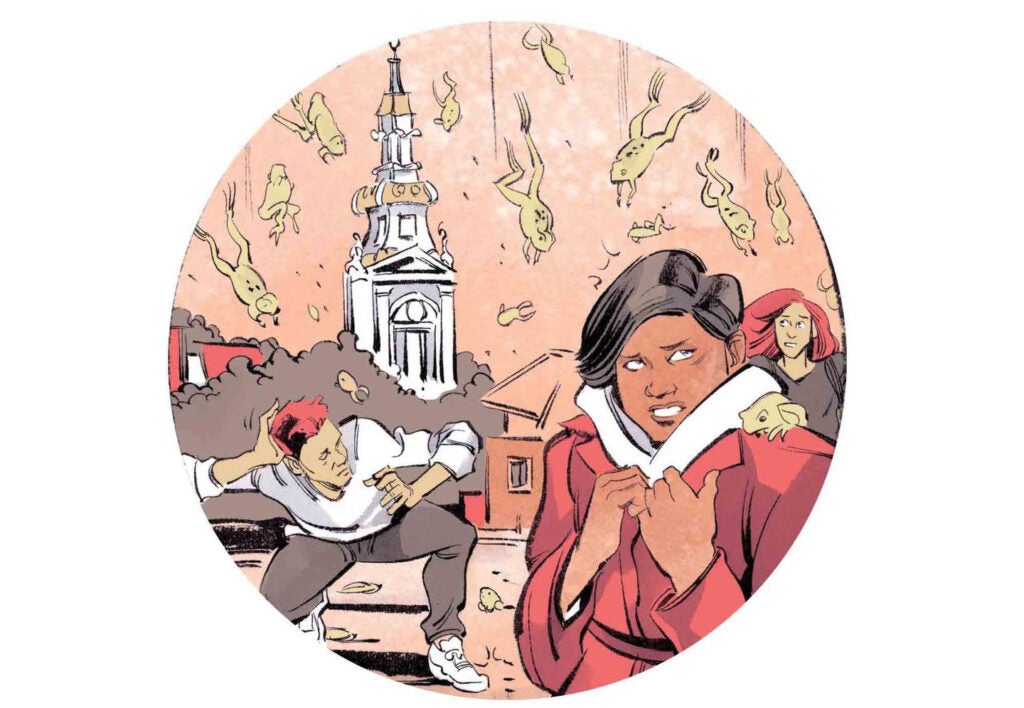 It happened in Odzaci, Serbia.

Waterspouts—vortexes that pull water into tornadolike columns—can also suck up objects. In 2005, a spout rudely plucked thousands of frogs from their cozy aquatic homes and dropped them from the sky over the nearby town of Odzaci, Serbia. 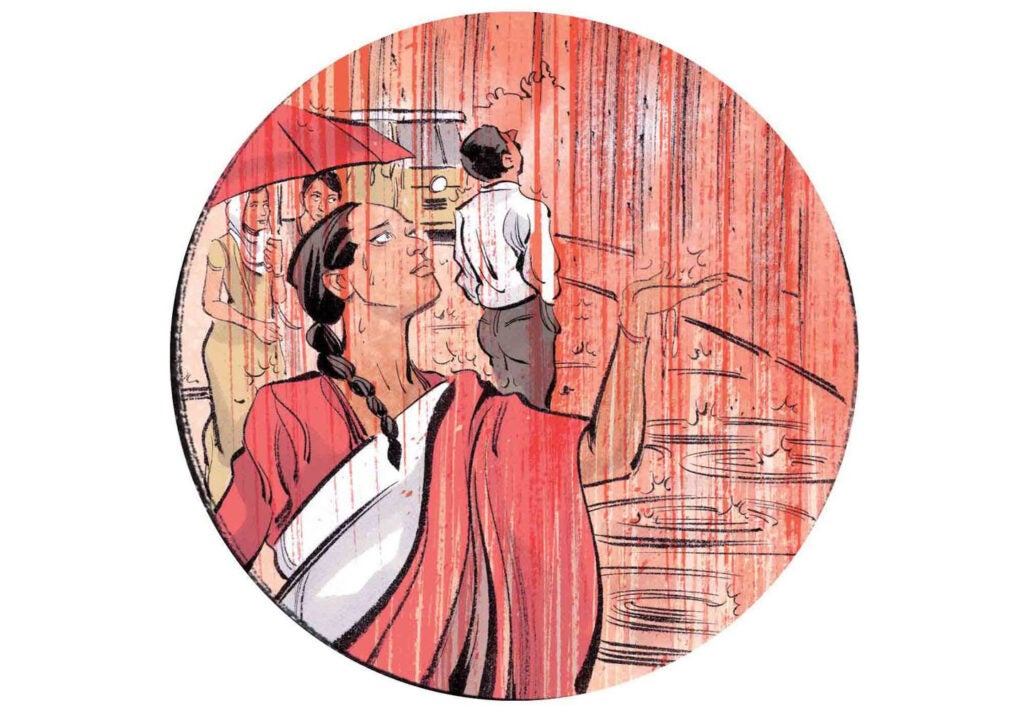 It happened in Kerala, India.

In 2013, crimson rain drenched the coastal Indian state of Kerala. The cause: red algal spores, likely trans- ported from the ocean to rain clouds by strong winds. The not-uncommon occurrence stained clothing and collected in what looked like puddles of blood. 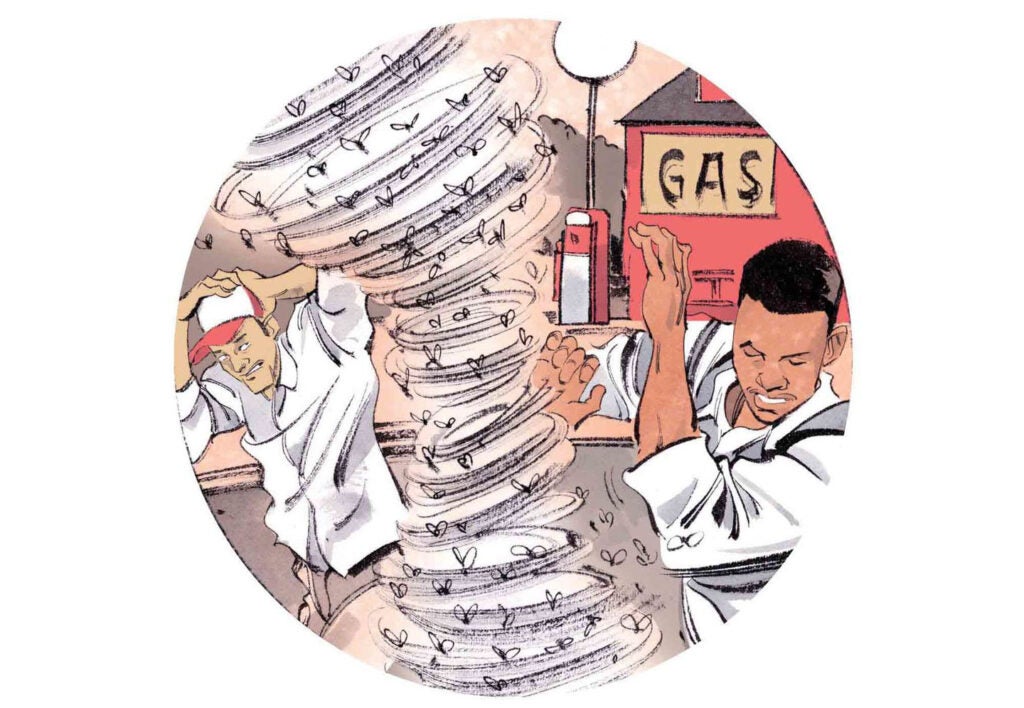 In 2014, a photographer captured a 1,000-foot-tall funnel of insects (probably locusts) over Vila Franca de Xira, Portugal. Small wind eddies can pull in midges, but larger “bugnadoes” usually result from optical illusions or swarms rather than weather. 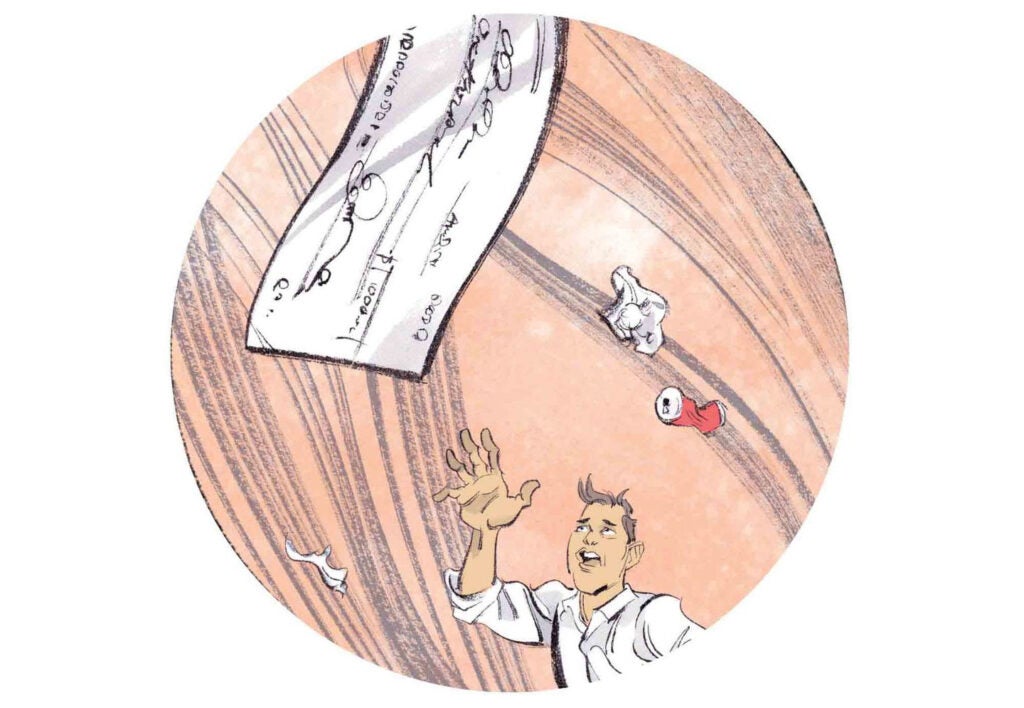 It happened in Palmyra, Nebraska.

A tornado’s updrafts can hurl papers and other light debris 20,000 feet into the air and carry them miles away. The farthest recorded journey happened in 1915, when a personal check from Great Bend, Kansas, traveled about 200 miles to Palmyra, Nebraska. 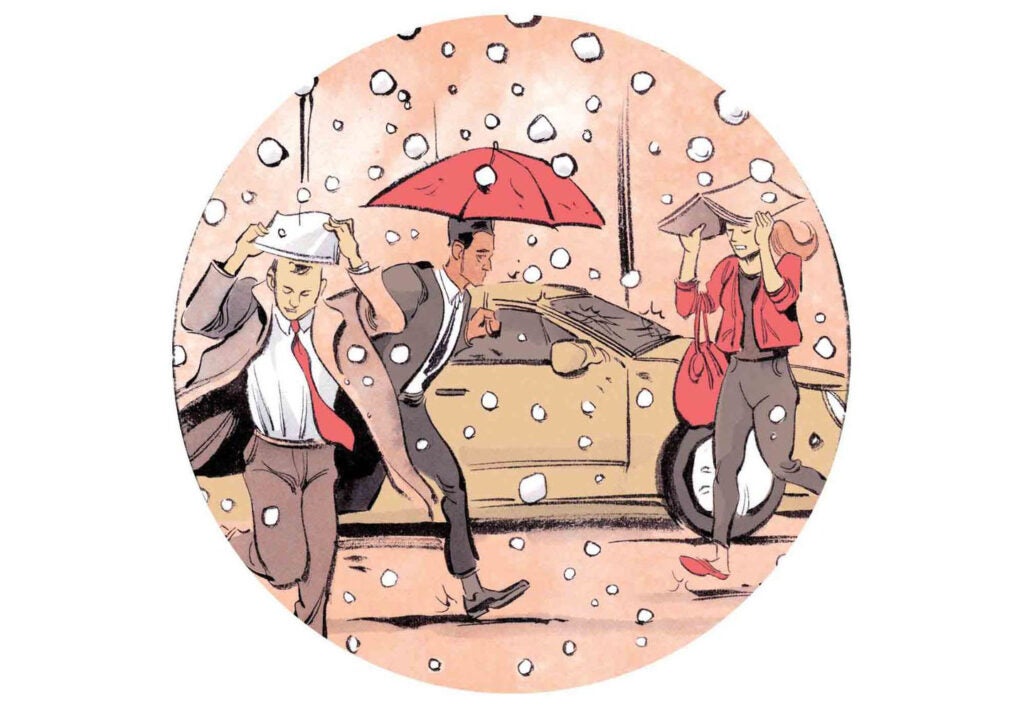 It happened in Vivian, South Dakota.

In 2010, huge hailstones rained down on Vivian, South Dakota. One broke U.S. records with a weight of nearly 2 pounds. Normally the size of marbles, these stones got tossed around longer, and coated in extra ice, by the storm’s powerful updrafts.

This article originally appeared in the July-August 2017 issue of Popular Science, under the title “Weather Gets Weird.”