3 weird ways we can remotely control animals and bacteria

A zap of electricity can make E. coli swim 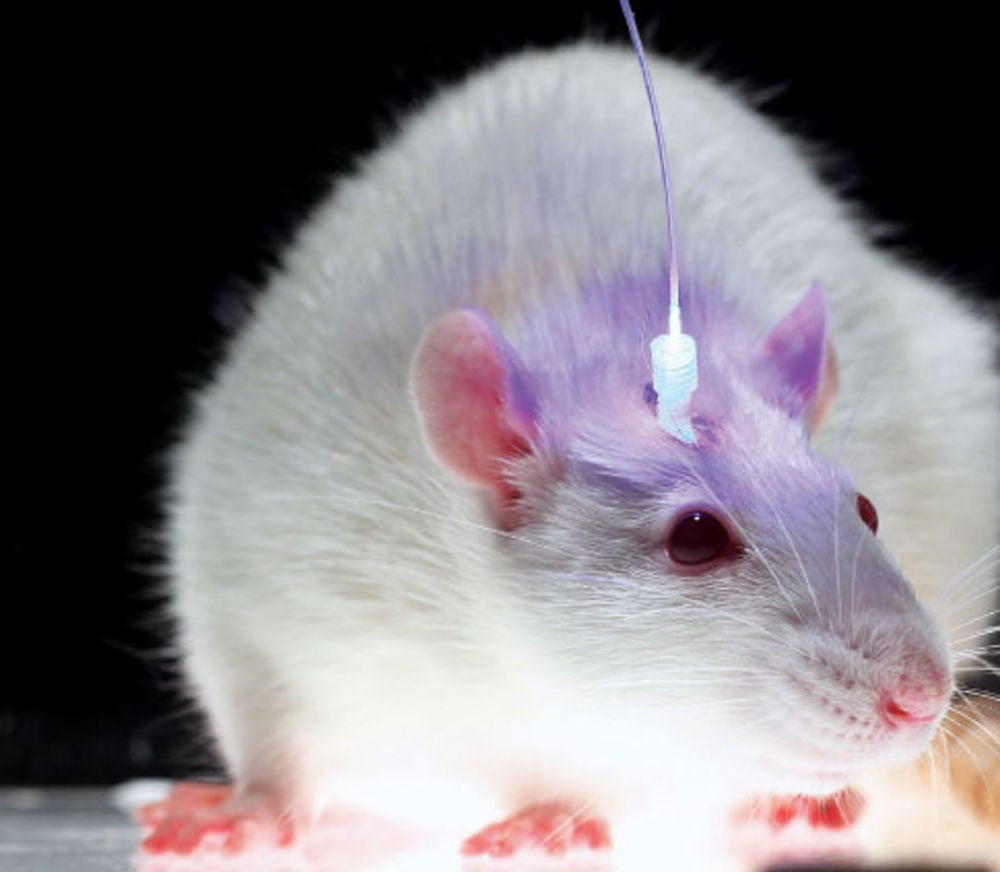 A mouse with an implant that lets scientists turn its neurons on or off with light. Magnetism and electricity can also be used to control cells from afar. John B. Carnett
SHARE

A gentle pulse of electricity can make bacteria dance (or rather, swim) to scientists’ tune. Researchers reported on Tuesday in Nature Communications that electricity can flip certain genes in Escherichia coli cells on or off, making the microbes wave their limb-like flagella or relay info to their neighbors on command.

Messing with these unsuspecting bacteria is the first step to making new biosensors and other devices that mix living cells with manmade materials. But it’s not the only way that bacteria—or bigger creatures—can be controlled from a distance. Scientists are already using light and magnets to command microbes and animals, and have their sights set on human cells. These remote-control techniques will help us learn about our bodies and treat ailments such as blindness, diabetes, and Parkinson’s disease. Here’s how it works:

The new study indicates that electricity is a quick and precise way of getting a rise out of cells. Researchers zapped E. coli cells with a weak electric current and supplied them with a protein called pyocyanin. Pyocyanin picked up a positive charge from the current, and used it to wake up machinery inside the cells responsible for turning certain genes on and off. By engineering the E. coli cells to have useful genes near this machinery, the team could turn on DNA instructions that wouldn’t normally be sensitive to charge. They ordered bacteria to swim, and to secrete message molecules that they passed on to other cells.

In this case, the cells were engineered to light up when they received the signal. But electricity could also guide the behavior of cells that haven’t been tinkered with. “That [signal] is interpreted by other cells that are otherwise completely unaffected by any of this gene expression stuff,” says coauthor William Bentley, a bioengineer at the University of Maryland at College Park. “You could turn on any gene in the cells that are engineered to respond to the electrode, and then by altering the signaling process you could turn on any genes that normally respond to that signal molecule.”

Scientists do already run electricity through our bodies with tools such as deep brain stimulation, transcranial direct current stimulation and pacemakers. But the new method could allow scientists to target processes that wouldn’t normally respond to electricity.

And in future, electricity could command cells to make hormones or other small molecules. Bacteria have already been programmed to make drugs for decades. “Insulin taken by…diabetic patients is actually made in the same bacteria as we’ve engineered,” Bentley says. “We could envision putting these bacterial cells, living factories that make insulin and any other beneficial compound, inside a small capsular microelectronic device that we’d swallow.” A capsule or implant could detect problems—like misbehaving blood sugar or pathogens—and then prompt the engineered cells to pump out insulin, antibiotics, or other medicines.

Scientists have pond scum to thank for a powerful tool called optogenetics that uses flashes of light to control brain activity.

Basically, green algae use light-sensitive proteins to guide themselves towards the sun. Scientists realized that they could genetically engineer neurons to carry similar proteins. The brain cells can then be turned on or off with a burst of light from lasers or LEDs.

This trick has been used to trigger hunting instincts in mice or cue the rodents to slurp a milkshake more quickly. The technique can even seed false memories and blur real ones.

The technique might help build better—if squishier—robots. One 3D printed “biobot” is lined with lab-grown muscle cells engineered to contract when exposed to light, allowing it to “walk”.

Optogenetics is also giving us insights about the brain that might lead to better treatments for Parkinson’s, PTSD, addiction, or Alzheimer’s.

The technique has promise to treat some neurological disorders, although patients’ genes would have to be tweaked to respond to light. It’s also pretty invasive; the fiber-optic cables or implants that can send light into the brain have to be put in surgically. Scientists are working on patches and tinier wireless devices to get around this problem.

Last year, optogenetics was used for the first time in a person. Researchers injected a virus laden with DNA that codes for light-sensitive proteins into a woman’s eye.

The woman has a type of blindness called retinitis pigmentosa, in which the eye’s photoreceptors slowly die. Hopefully, the new DNA will enable other, undamaged cells in the retina to respond to light instead and restore some sight.

The clinical trial will ultimately involve 15 participants. If it goes well, it could encourage other researchers to give optogenetic therapies a shot.

For another instrument to make nerve cells fire, scientists call in Magneto. The magnetized protein, that is.

Researchers at the University of Virginia wanted a nerve cell switch that was less invasive than optogenetics, and quicker to act than drugs. They designed Magneto by fusing two pieces of cellular machinery together. One, an iron-storing protein called ferritin, made Magneto sensitive to magnetic fields. The other, called TRPV4, can be turned on by stretching forces—such as magnetic torque—to make nerve cells fire.

The researchers injected a Magneto-carrying virus into mice and zebrafish larvae. Magneto turned on neurons in the fish to make them curl up when placed in a magnetized aquarium. In the mice, Magneto was directed to a part of the brain involved in reward. These rodents discovered that they liked to hang out in the magnetized areas of a cage, where Magneto could prompt their neurons to release dopamine.

Magneto can help scientists tease apart how specific neural circuits govern behavior, coauthor Ali Güler said in an email. “We are testing if we can inhibit seizures in [animals] right now,” he said.

Magneto is the newest device to control nerve cells using magnetic fields, but it’s not the only one. Previously, scientists have used magnetism to make diabetic mice release insulin, lowering their blood sugar. The remote-control technique might help people control chronic illnesses such as diabetes and Parkinson’s.

“There could be clinical applications in time,” says coauthor Jeffrey Friedman, a biologist at Rockefeller University in New York. To pull off techniques such as this one and optogenetics, scientists are still figuring out how to safely deliver foreign DNA to encode useful proteins in people. “I think it’s a ways off, but it’s certainly not outside the realm of possibility.”