They keep their friends close and their anemones closer 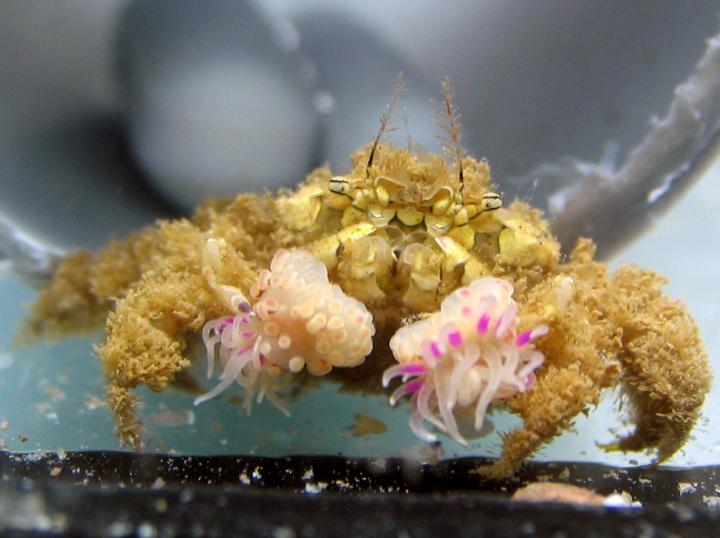 Nothing can get between a boxer crab and his sea anemones. Not another crab, not a lack of sea anemones in the immediate environment, and certainly not biologists who deliberately remove a boxer crab’s living pom-poms in the name of science.

In a paper published this week in PeerJ, biologists found that boxer crabs go to great lengths to ensure that they are always in possession of two anemones—no more, no less. For the study, they collected tiny boxer crabs (Lybia leptochelis) from the Red Sea. These crabs are popular aquariums additions thanks to their distinctive accessories—live anemones (genus: Alicia)—which they constantly clutch, cheerleader-style, in their front two claws.

Why hold on so tightly? The anemone pair is believed to act as the crab’s security force. In exchange for the ability to move around with the crab—and leftover food bits from the crab’s meals—the anemone provides protection from bigger fish in the sea.

“As with all animals that live beside/under/with cnidarians (coral, anemones, jellyfish) the assumed benefit is protection due to their stinging cells,” Yisrael Schnytzer, an author of the paper, said in an e-mail. When Schnytzer and his colleagues placed boxer crabs in tanks with fish or other predators, the crabs would wave the anemones in the direction of the fish, often causing the fish to back off.

“[The anemones] may also provide “chemical camouflage” so that when they are for example under a rock—where we usually find them—and you are say a fish or octopus nearby sniffing for food, then you may just smell the anemones and go away,” Schnytzer says.

Schnytzer and colleagues wanted to know what would happen if part of the crabs’ security force got removed. So they patiently and painstakingly removed anemones from claws, a process that could take anywhere from 50 to 80 minutes.

If only one anemone was removed, the crabs would typically force the anemone to reproduce asexually, cloning the remaining anemone by gently teasing it apart and separating it into two individual pieces over the course of about 20 minutes.

Both anemone pieces would recover after a few days, growing into healthy individual clones that proudly adorned the Boxer crab claws.

In some cases the biologists removed both anemones, then placed the barren crustacean in a tank with a Boxer crab still in possession of its pom-poms. In those cases, the anemone-less crab attacked their tank-mate until it managed to steal an anemone (or parts of one). The crabs would then go through the cloning process until they had the right number of anemones between the two of them. This anemone division is thought to be one of the only instances of a creature inducing asexual reproduction in another species in the wild.

Weirdly—considering the immense importance that local crabs place on their symbionts—the researchers have not been able to find any of this particular species of anemone alone in the wild in their study area after four years of observations. And yet all of the boxer crabs they’ve encountered have had two anemones clutched in their claws. So where do the crabs get their anemones in the first place?

“It is possible that they are there, but live in some bizarre microhabitat where we didn’t look,” Schnytzer says. “Alternatively, maybe they were common in the past and are no longer for whatever reason. And another is that they do occur, but elsewhere, and the first crabs brought them, and then from there just stole and split. Bottom line—we don’t know.”