This device may pull water out of thin air, but not as well as we hoped

A clarification about our WaterSeer article 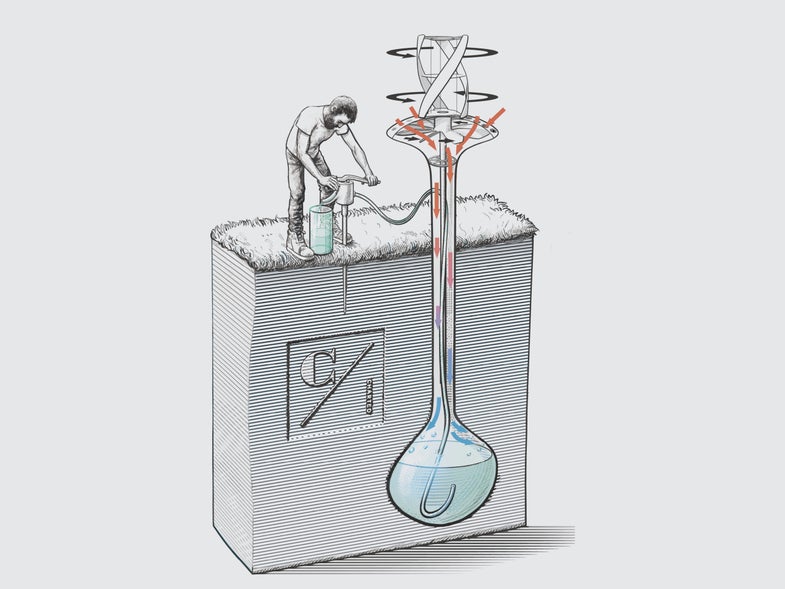 The March/April 2017 issue of Popular Science was all about water. We covered the gamut, from how much of this essential liquid goes into the foods you eat, to what happens when you don’t get enough of it, and how, in some areas, water is running out. That’s why we were drawn to a simple and inexpensive invention called WaterSeer, which aims to pull moisture from the air without using any electricity, to provide clean drinking water to those in need.

Unfortunately, it’s not likely that WaterSeer could pull 11 to 14 gallons of water out of the air per day, as its makers claim. And there are a few other problems with it as well.

It won’t work in arid regions

WaterSeer is supposed to work by blowing air into an underground chamber. During the daytime, ground temperatures are lower than in the air, and because cool air can hold less water than warm air, the idea is that water vapor will condense on the cool sides of the chamber, clean and ready for drinking.

Vici Labs, the makers of WaterSeer, estimate that the device can harvest 11 gallons of water a day from semi-arid air. But the problem is that the drier the air is, the lower its dew point—the temperature needed to condense water out of it.

“In most of the areas that are being underserved by water resources, the dew points are very, very low,” says thermodynamicist Kenneth Kroenlein. Ground temperatures two meters below the surface (the depth currently proposed for WaterSeer) aren’t likely to stay low enough to make that condensation happen.

“It’s very unlikely that you’re going to be able to use condensation to pull water out of the air in dry places,” says Kroenlein.

However, the device may have some success in humid areas. And although it may seem counterintuitive, water scarcity strikes even in places with lots of moisture in the air.

As opposed to physical water scarcity, which occurs in dry regions, economic scarcity can occur in regions where water may be abundant but infrastructure to deliver clean water is lacking. In Mozambique, for example, millions of people don’t have access to clean drinking water. Many families—particularly women and children—have to walk for an hour or more to collect water, and unsafe water kills about 55 of the country’s children a day.

WaterSeer might be able to collect hydration in these areas—although Rutger Willem Hofste, a researcher at the World Resource Institute, cautions that the water would have to be filtered to remove any pollutants. And the device probably can’t produce the 14 gallons a day that its makers estimate.

During field trials in Berkeley, California, half- and quarter-scale models of WaterSeer managed to pull about 300 milliliters of water from the air over the course of about three hours. Considering a larger working model, a 24-hour condensation period, and other prototype refinements, Vici Labs calculated WaterSeer could harvest 14 gallons of water per day in humid environments.

A work in progress

Critics have raised a few other charges against WaterSeer—including that immense amounts of air would have to circulate through its chamber in order to condense the amount of water claimed. And while that’s a valid critique, according to Kroenlein, some of the others were not.

As water vapor condenses into a liquid, it releases energy in the form of heat. Some critics of the WaterSeer said the heat released in the underground chamber would be so great that it would heat up the surrounding soil and the bulb would stop working. By Kroenlein’s calculations, that’s not accurate.

“It’s not about how much heat is generated, but how quickly it can be transported away from the bulb,” he says. And while the thermal conductivity of soil can vary from place to place, Kroenlein calculated that condensing 11-14 gallons a day wouldn’t be a problem—the surrounding soil would disperse the heat with only a one-degree Celsius change in temperature.

“So it’s actually very easy to get that heat out of there with just the thermal conductivity of the soil,” says Kroenlein. “The problem is actually getting enough water into the apparatus in the first place.”

The heat transfer isn’t enough to fully vindicate the WaterSeer. The device may indeed work, but that it can’t work as well as its makers intended.

The folks at Vici Labs, for their part, say they’re still refining the design. And although they can’t change the laws of thermodynamics, they’re developing a solar-powered cooling system for use in extreme environments. This addition may overcome some of the biggest challenges—albeit, not without detracting from the simplicity that made this device so appealing in the first place.

Complex problems don’t always have simple solutions. But at Popular Science, we remain optimistic that the innovations in science and technology can make the future better for everyone.