Ants can find their way home walking backwards, but they have to peek first

Ants may have a complex understanding of their place in space 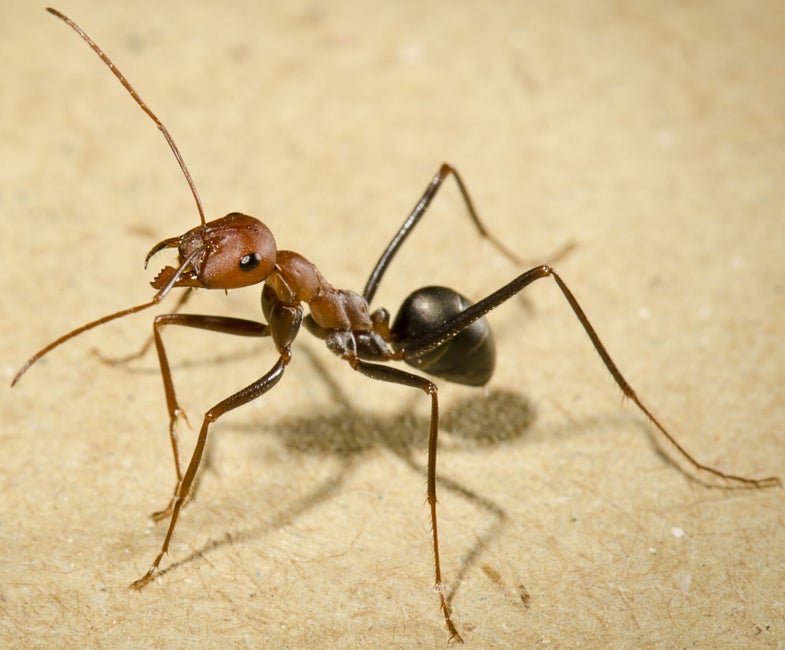 Welcome to another installment of “Scientists Do Stuff to Ants.” Previous episodes include “What if we glue little stilts to them?” and “How about if we give them tiny yellow blindfolds?” Today’s installment: “What if we make them turn 90 degrees to get home, but they have to do it backwards because of a giant cookie crumb?”

The simple answer is that they get lost (as you can see in the video below). Ants memorize their visual surroundings as they walk, so when they head home they’re navigating based on sight. But ants don’t always walk forward. If they’re trying to bring back a piece of food that’s too big to carry in front of them, they’ll turn around and go backwards. That makes their visual cues useless, but ants in their natural habitat can still find their way home. The question is: how?

An international group of scientists investigated that question by studying desert ants called Cataglyphis velox near Seville, Spain. They published their findings in the journal Current Biology on Thursday. Like humans, ants are motivated by cookies—so to train them to follow a certain path, you simply place cookie bits at a location several meters away from their nest and use barriers to force them along the route you want them to take. Once they reached the cookies, scientists forced them along a different route home, creating a one-way loop from nest to cookies and back again. The key is that their rout home involved a sharp 90-degree turn, so it wasn’t a straight shot—they had to adapt their path as they went.

Ants with little cookie bits can walk forward as per usual, so they navigated the 90-degree turn just fine. But when they had to walk backwards to drag bigger cookies, they missed their turns, going on and on in the same direction they headed out in. Backwards ants aren’t able to recognize their surroundings in reverse, so they don’t realize that they have to turn to get home. And it’s the same deal if you drop the ants in a new location. Forward-moving ants can use visual cues to get back to the nest, but backward-moving ants head off in the wrong direction.

But they do have one trick up their itty-bitty sleeves: peeking. About a third of the backwards-moving ants in these experiments dropped their cookie bits to look around. They took a few steps around, went back to the cookie and headed off—this time in the correct direction. Once they did that, they kept a straight path—going backwards—using the location of the sun as a celestial compass. Dung beetles use the same technique to roll their poop balls backwards.

When the researchers used a mirror to mimic the sun’s rays coming from a different direction (while blocking the direct rays with a board), the ants immediately changed direction to adapt to the sun’s ersatz location.

So, once they take a peek (as seen in the video above), the ants know exactly where they’re going and can get home just like the forward-facing ants do. That doesn’t seem all that revolutionary. Of course turning around helps them figure out where to walk. Here’s the thing: the fact that ants can look forward, recognize where to go, turn around to retrieve their cookie, then drag it in the correct direction is actually a remarkably complex process. It means they’re translating a simple sense of which path to follow into a more holistic sense of where they are in the world. It’s kind of like the difference between knowing that you have to make two rights and a left to get home and understanding where you and your home are in space and being able to navigate between them without a given route.

That’s not a perfect analogy, but you get the picture: ants seem to have a complex understanding of their place in the universe, which is kind of amazing. Even more amazing: not only do scientists know what kind of cookies ants are fond of, but they know exactly how small to make a crumb to allow an ant to carry it home. Researchers know more about ant cookie-lifting capabilities than I know about myself. Though I do at least know what kind of cookies I like.