Great news: Some bed bugs are really good at climbing 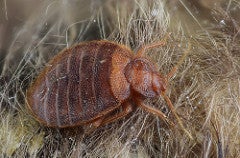 Cimex lectularius, better known as the common bed bug, is weird. It can inherit mitochondrial DNA from both its mother AND its father (most animals inherit only get that sort of DNA from mom), it might be splitting off into an entirely new species, and, perhaps most terrifyingly, the bloodsucker is immune to many insecticides.

But if one thing about bed bugs (who’ve been spotted not only in beds, but in movie theaters, department stores, and even riding New York City’s subway lines) has consoled us, it’s the fact that they’re lousy climbers. The same, however, cannot be said of their tropical cousins, Cimex hemipterus, according to a study out Wednesday in the Journal of Economic Entomology.

Lead by Chow-Yang Lee, a professor of entomology at Universiti Sains in Malaysia, the researchers looked at four commercial bedbug traps to see how adept Cimex lectularius (the common bedbug) and Cimex hemipterus (the tropical bedbug) were at breaking free. Bed bug traps aren’t useful at eliminating bed bugs—the bugs are often too plentiful for that—but they are used to help detect if you have an infestation in the first place.

Sticky traps, at least in theory, work by essentially gluing bed bugs into place, while pitfall traps work by tricking them into falling into open containers. In theory, the bed bugs are unable to climb up the smooth walls of the pitfall trap to get back out. Some traps may use lures like heat or carbon monoxide, and even insect pheromones to make the traps more alluring, but the basic trap form remains more or less the same.

The problem, notes the new study, is that few of these traps have been independently tested for efficacy, and the ones that have, have mostly been tested against the common bed bug, and not the tropical bed bugs that are more prevalent in places like Malaysia where the lead author lives. And yet, many of the products that are marketed towards containing the common bed bug are also marketed as defense against its tropical kin. Nobody’s really looked to see if those traps actually work—until now.

The study looked at four pitfall traps the Verifi bed bug detector, ClimbUp insect interceptor, BlackOut bed bug Detector and SenSci Volcano bed bug 40 detector. All the traps were American made. The researchers put bed bugs into each trap—one strain each of the common bed bug and the tropical bedbug—and analyzed their ability to escape. They found that while juveniles of each species were mostly unable to escape, the adult tropical bed bugs were able to escape from all four traps. The common bedbug was only able to escape from two traps (ClimbUp and Verifi) but at much lower rates. The study authors note that ClimbUp instructions state to use talc with the trap, which they didn’t do for reasons of study consistency.

A closer look with an electron microscope micrograph may have revealed why: tropical bed bugs have hairier legs. Specifically, they have a hairy tibial pad, which the common bed bug lacks. Tenent hairs, or spine-like appendages on the tibial pad, allow them to get a stronger grip on the trap’s surface to propel themselves out.

Still, not all of the traps were equally as ineffective. Only 20 percent of tropical bed bugs made it out of the Volcano trap, compared to 80 percent that made it out of the Verifi. The study authors hope that the results will help trap manufacturers make more effective bed bug traps in tropical climates. But those of us who live in more modest climes should be grateful that the common bed bug still isn’t a great climber.