They may get less shut-eye than any other mammal 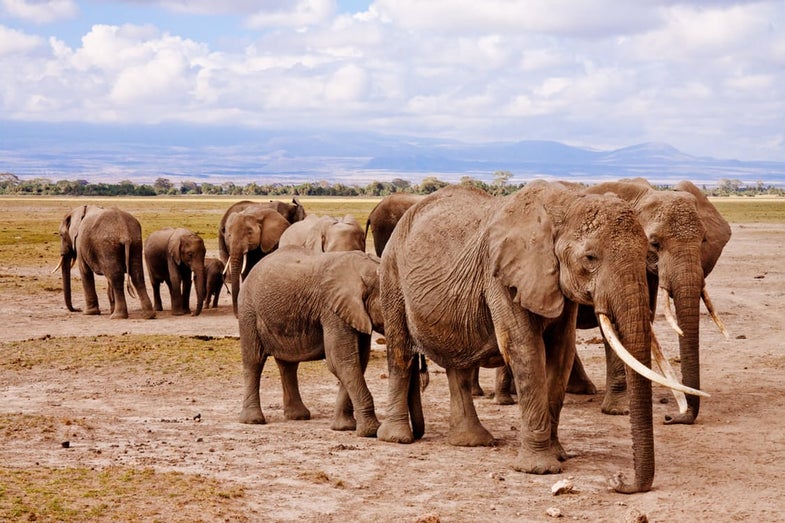 Who could blame them? They have good reasons to stay awake. African elephants need to gobble a few hundred pounds of food a day and stay vigilant of cunning predators. After fitting two elephant matriarchs—female elephants that lead their respective herds—with activity monitors, researchers tracked these elephants through the Chobe National Park, in northern Botswana, for just over a month. Their results, published Wednesday in the journal PLOS One, found that they slept around two hours a night. And on five nights, they didn’t sleep at all.

If these sleeping habits are normal in the elephant world, these creatures sleep less than any other mammal.

Beginning with observations of circus elephants in the 1930s, scientists have watched elephants sleeping for nearly 80 years. But this was mostly done in captive environments, where the worries of sneaky lions and needs for water are of little concern. Without these distractions, captive elephants slumber about five and a half hours a night—something that Netlix-binging humans can handle with ease, at least on occasion. But researchers suspected that elephants in the untamed wilderness would sleep much less.

“We did think they’d sleep about two and half hours a day, so the time was shorter than we thought, but not too much,” says Paul Manger, the study’s lead author, who researches anatomical sciences at the University of Witwatersrand in Johannesburg, South Africa.

It can be hard to spot a snoozing elephant. Sometimes the creatures lay down to sleep, which is an obvious indication of slumber. But sometimes they sleep while standing. Complicating matters, they can also rest when standing. So the researchers came up with a trunk trick: if an elephant’s trunk stayed still for at least five minutes, then the researchers figured she was likely getting some bona fide shut-eye.

So for the first time ever, Manger and his team implanted activity loggers into elephant trunks. Manger emphasizes that although the animals were temporarily immobilized, the implantation procedure was minor, and the elephants are fine and back wandering around Chobe National Park.

They found that one matriarch slept for 2.3 hours and day, and the other for 1.8 hours. Combined, they averaged two hours of sleep a day, but they didn’t accumulate these sleeping hours all in one go. Rather, they took around five brief sleeping spells a night, mostly during the deep witching hours of 1 a.m. to 6 a.m. And on five different days, the elephants didn’t sleep at all, which was unexpected.

It seems they were fleeing from something or someone, but the threat remains a mystery. They could have been looking for water. Or there may have been poachers, lions, or sexually aggressive males, says Manger. The team doesn’t know because they intentionally stayed away, so as not to disturb the elephants’ sleeping patterns.

Such a long period without sleep is “probably exceptional, not typical,” says Phyllis Lee, a researcher with the Ambolesi Trust For Elephants who was not involved in the study. Lee emphasizes that elephants also rest a lot, which might enable them to carry on with so little sleep. “They can rest at night or in the day, or both, so their rest may be overlooked,” says Lee.

Even if elephants do get tired, their brains might compel them to stay awake and eat. Elephant brains contain a cluster of brains cells—called oreixinergic nuclei—that appear related to sleep and safety, explains Manger. For instance, “If you haven’t had enough to eat, the orexinergic neurons will keep you awake getting food until you are full, and then allow you to sleep,” he says.

Although the results show that elephants sleep less than any other known mammal, the study has its limitations. Just two elephants were studied, and the second matriarch was nursing a calf at the time, which likely resulted in her receiving less sleep than normal. Also, the activity loggers in the elephants’ trunks found some compelling data, but due to the wild nature of study, they didn’t directly measure their sleep—they measured trunk activity to infer sleep.

Even so, the results add to the enigma of sleep, and whether big bodied mammals sleep less than the smaller sort. The evidence isn’t clear. Another large herbivore, the domestic horse, snoozes for around three hours a night, putting it in second place behind the wild elephants. But the gray whale, which can weigh up to 40 tons, sleeps at least nine hours a day.

But one thing is certain: Americans don’t snooze nearly enough. Our sleep deprivation makes us less healthy and less productive, which costs us as much as $411 billion a year. Our excuses for sleep deprivation are lame, though, when compared to an elephant’s. No Netflix binge is as aggressive as a lion.