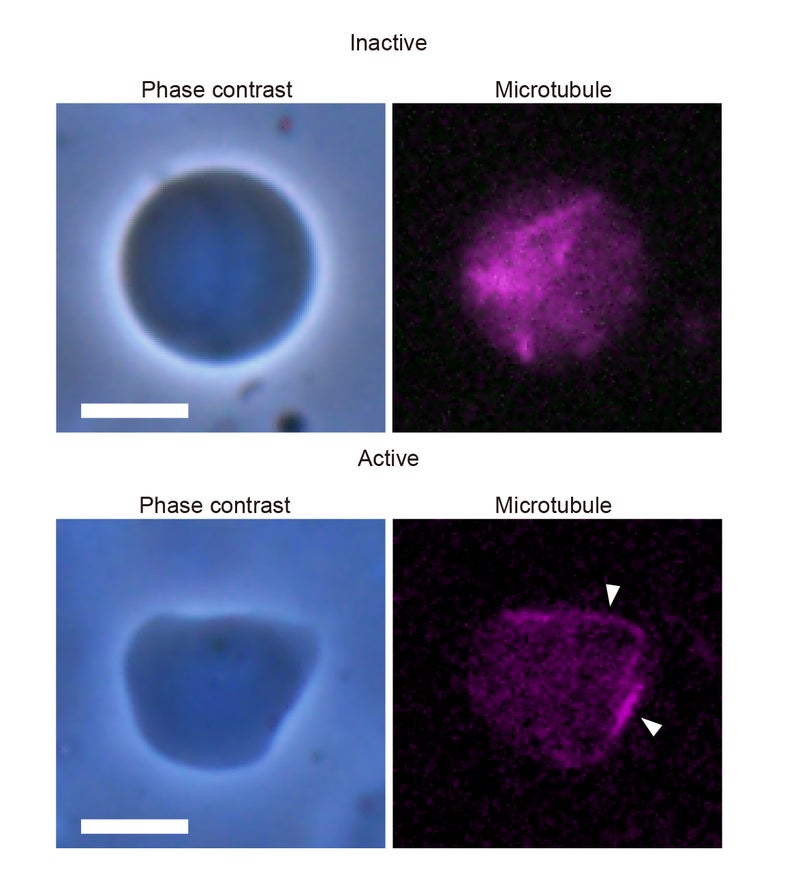 When activated, motor proteins inside the robot grab microtubules and poke them into the robot's body, creating movement. Sato et al
SHARE

A robot is movement, controlled. This is as true for plane-sized flying machines as it is for micrometer-sized contraptions, like the amoeba-inspired robot recently created by researchers at Japan’s Tohoku University. It isn’t the smallest robot ever made, as there are a few robots at the nanometer scale, but it’s one of the smallest robots whose movement can actually be controlled.

To disengage the clutch, the researchers shine the molecule with a different light, and the cell-like robot stops moving. The effect is a tiny blob that flails and moves under human control, in a manner not unlike that of an amoeba.

Still, there a limitations. This is a robot whose movement starts and stops on a researcher’s command, but the direction of that movement isn’t yet something the team can really steer. That’s a goal for future work on the little machine. In the paper, the researchers contemplate changing the robot’s tiny, spherical body into a more asymmetric one, or configuring DNA that responds in specific ways to specific environments, so the robot can move more reliably towards environmental signals.

“From a robotics point of view,” the authors write in the paper’s discussion section, “we believe that designing molecular devices and integrating them into a system will be an important means of realizing a programmable and controllable function for engineering applications.”

Making the robot is, after all, just step one. Improving it—and figuring out what to do with it—are tasks for the future. And if the team that made this robot is interested in sharing it with other researchers, transport shouldn’t be too much trouble. This artificial amoeba works just fine after it’s been frozen, mailed, and thawed.

Learn more in the video below: