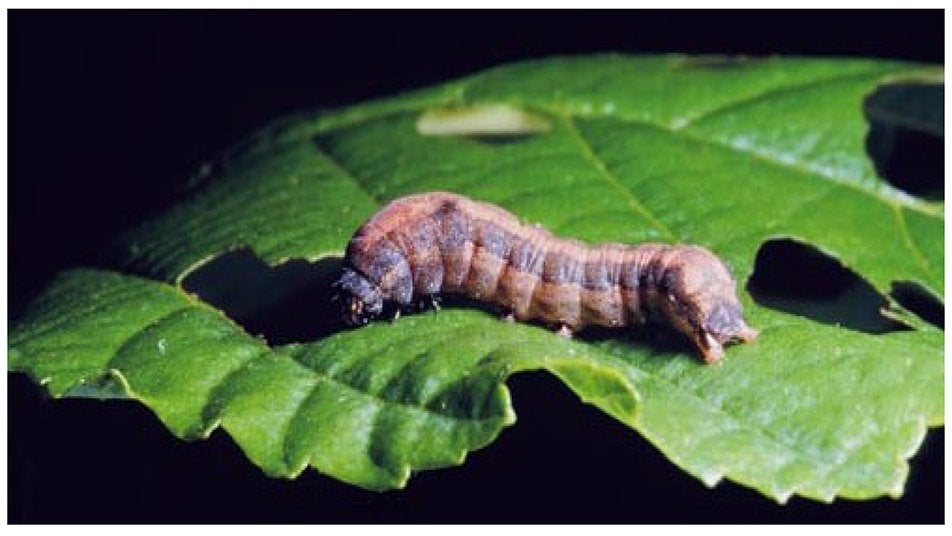 Moths are herbivores. The last thing they want are tiny bugs in their bellies. But they give a pass to one bacterium—E. mundtii. In fact, they allow it to proliferate uncontrolled inside their guts as they grow. And for a long time, scientists couldn’t figure out why. But a recent study in the journal Cell Chemical Biology suggests that this bacterium secretes a toxic substance that kills off other invading—and often deadly—bacteria, thereby securing itself a prime spot in the moth’s gut.

Scientists have known for a while that this species exists in high numbers inside the larval gut of a particular moth species, the cotton leaf worm, S. Littoralis. A 2012 study found that that this one species alone makes up about 40 percent of the entire microbial makeup of that moth’s gut. In trying to make sense of this, they found that young S. Littoralis larvae had an abundance of Enterococcus, the family that E. mundtii belongs to, in their guts. But the guts of older larvae seemed to be dominated only by E. mundtii.

What was causing this significant change? Researchers took a group of Enterococcus bacteria from the young larvae and watched how they interacted with each other. They found that E. mundtii were able to outlive the rest by secreting a toxic peptide that not only killed off other Enterococcus bacteria but also a multitude of other harmful, invading bacteria that would have otherwise had a good chance of killing the moth.

Aside from this being an extremely effective way to survive and live on to adulthood, it also demonstrates a natural mechanism through which microbes prevent other microbes from killing their hosts. How will this help us humans? The researchers think this idea of using one ‘safe’ species of bacteria to fend and kill off invading, toxic bacteria could be an effective way to create new types of antibiotics. In fact, E. mundtii could be particularly useful—according to the researchers, it seems to selectively kill off common food-borne pathogens, like L. monocytogenes as well as toxic bacteria like certain strains of E. faecalis and Streptococcus, while leaving healthy bacteria alone.

Novel methods to combat bacterial infections in humans are sorely needed. Just last week, a woman in Nevada died of a superbug that was resistant to every known and available antibiotic on the market. Instances like these are a reminder that antibiotic resistance continues to loom in our near future. Deadly bacteria quickly evolve so to survive the antibiotics that once killed them off, so fighting their increasing resistance to drugs is a never-ending tug-of-war. But if we can come up with new methods—like using other bacteria to fend them off—we may be able to slow down the instances of these infections.

For now, the researchers are eager to see if this type of symbiotic defense mechanism exists in other insects as well, and if so, how exactly it works. There’s a high chance that it does, the scientists note, given that insects are remarkably resistant to infection compared to other animals. Perhaps with more research we can adopt some of these remarkable mechanisms as well.