We may finally know how mosquitoes fly

But we're still not sure why 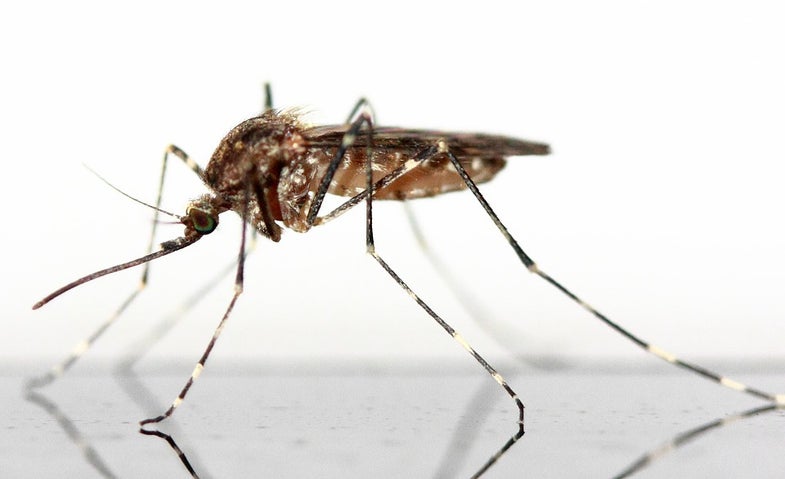 Their flight behavior is, to put it simply, weird. The sweep of their wings is extremely shallow, covering only 44 degrees—honeybees, also considered to be very shallow fliers, move their wings at an angle of around 80 degrees. Mosquitoes also flap incredibly frequently, beating their wings against the air some 800 times per second.

But how does that strange flapping translate into flight? A paper published in Nature on Wednesday, has some answers.

“As things get smaller, they tend to flap faster,” says Richard Bomphrey, lead author of the paper. A bird will flap its wings less often than an insect, and the smaller the insect, the higher the frequency. But even so, just comparing sizes, a mosquito would only be expected to flap at about 200 times per second. Instead, it moves at about 4 times that.

The high frequency and shallow angle means that they aren’t using the same methods to get into the air as, say, an airplane, which has a long runway and wide stable wings to generate lift. So what laws of aerodynamics are mosquitoes using?

This video, for example, shows a mosquito at 667 times slower than normal.

The videos, coupled with computer modeling and laser-based measurements of airflow around mosquitoes in flight, helped show that mosquitoes get absolutely everything they can out of the short, shallow flapping of their wings.

Like other insects (including the not-exactly-aerodynamic bumblebee) mosquitoes take advantage of a leading edge vortex. That means they create a tiny tornado at the front of their wing as they flap down. The low pressure at the center of the vortex helps generate lift, so that as the mosquito flaps its wings, the low pressure can start to lift and move the mosquito’s body.

But the leading edge vortex alone wasn’t enough to explain how mosquitoes fly. As it happens, mosquitoes use every part of the flapping motion to help them stay aloft.

In the video recordings and computer models, Bomphrey found that as the mosquitoes rotate their wings mid-flap they are able to support their weight with a mechanism called rotational drag.

And finally, as the mosquitos bring their wings back up, they recycle the wake that they created at the start of their wing stroke, holding their wing in such a way that the movement of the air past the wing creates more vortices on the back of their wings as well, called trailing-edge vortices.

“Its acting a little bit like a wind turbine,” Bomphrey says, noting how the mosquito tries to use up every bit of energy that it can. “The energy in the wake would otherwise be lost,” he adds.

But why did mosquitoes evolve this still-energy-intensive flying method, instead of flying more efficiently in the first place?

It’s a question that researchers are still trying to puzzle out. One possible answer, suggested in a 2009 Science article, points to that annoying buzzing noise that mosquitoes make.

It’s frequent flapping that generates all that buzz—much like a vibrating string on an instrument—and male and female mosquitoes tend to whine at different frequencies, so it’s possible that high-frequency flapping was sexually selected as a sweet-sounding trait as the creatures evolved. It’s certainly something to think about the next time you go to smack down the source of that annoying buzz.