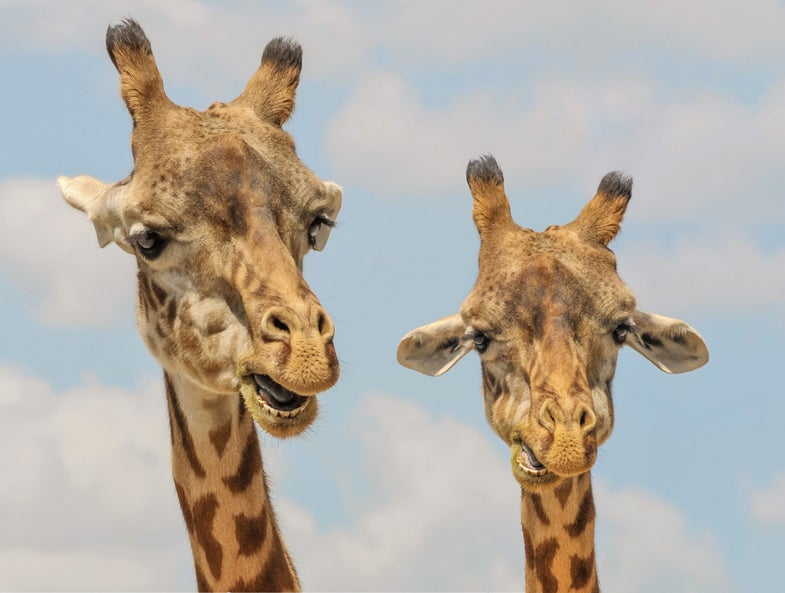 UPDATE: On Saturday, April 15—well over a month after this article was initially published—April finally gave birth! Congrats.

A giraffe in Harpursville, NY is about to give birth. Or rather, she’s been “about” to give birth for several days now. As of the writing of this article, there are 74,000 people watching a live stream of April the giraffe just slowly wandering around her pen, flicking her tail, and stretching. It’s pretty boring. So instead of just sitting there watching a video feed, take this time to learn a little something about April and what she’s been through for the 15 freakin’ months that she’s been pregnant.

We’ll start at the beginning of this beautiful process: conception. Giraffes don’t have a set mating season. Instead they have an estrous cycle, which is a lot like the human menstrual cycle (but with less blood and slightly different hormones). The male giraffes don’t just mate with the ladies all the time, so they generally try to find a way to determine is the lady is fertile. How, do you ask? Pee. The answer is always pee.

The boy giraffe lopes on over to the girl giraffe and rubs against her in what can only be described as gentle whacking. Then when the lady starts a-peein’, the gent leans down and tastes it. If he tastes hormones that indicate she’s in heat, the beautiful mating ritual begins. Once the male knows he has a fertile female in front of him, he sort of follows her around trying to mount her for a couple of days, often while sporting a frankly alarming erection, and sometimes licking her hind legs. His mate just keeps walking away from him every time he tries to do this (and can you blame her?). At some point though, she stands still long enough for the deed to be done. Once the male rears up on his hind legs and mounts her successfully, he ejaculated in mere seconds. Sometimes he can go again (and sometimes again after that) each time only for a few seconds—as his partner continually walks away from him. It’s kind of a weird dynamic, to say the least.

But don’t worry—it’s not just the females who have to deal with what must be a deeply unsatisfying mating ritual. It’s the males, too! The internet likes to cite the number 94 as the percent of all giraffe sex that’s homosexual in nature. It’s not actually clear how much of giraffe sex is male-on-male, simply because researchers observe it so infrequently. One paper from 1985 says that in three years of observation, scientists only saw one successful heterosexual mounting (out of 46 attempts) and 16 homosexual ones, though those weren’t all successful. Now, obviously they’re missing a lot of matings, because there was more than one giraffe born in the herd they observed that year—so they certainly have a skewed sample. Perhaps they were too busy checking out the male-on-male action to notice the other heterosexual sexy times, but alas we will never know.

The important thing to remember is that the researchers initially thought that the homosexual matings were a dominance thing—one male trying to assert his role over another. But the male giraffes who were being mounted didn’t display any signs of submission the way lady giraffes do, which means it’s probably just sex for sex’s sake.

Anyway, now the lady giraffe is pregnant and she stays that way for 400 to 460 days. Her mate has already abandoned her—males play no role in raising the young (sorry, April, but your loving partner Oliver has already checked out). After all that time, she has a single calf. She gives birth standing up, which means her baby falls literally head first onto the ground from about six feet in the air. But giraffe calves don’t have a hard time adjusting to that rather rude introduction to the world: They can stand up almost right away, and can run around on their adorably gangly legs just a few hours later.

And there you have it. The miracle of giraffe birth hinges on pee consumption. Congratulations, April!