This one simple trick predicts when an ice age will pause

And it all started with an e-mail 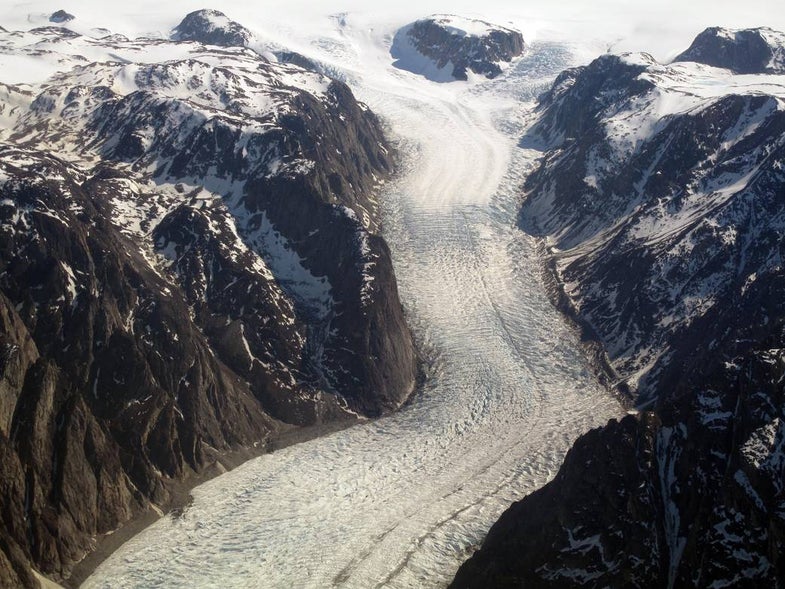 It all started with an e-mail. Three years ago, University College London professor Chronis Tzedakis had just explained the basic cycles of an ice age to an undergraduate geology class; how the Earth goes through periods of glaciation followed by warmer periods when glaciers melt. Sometimes, the timing between those periods varies dramatically.

“I was trying to talk about it very very broadly in a lecture of first-year undergraduates,” Tzedakis says. “And then a student e-mailed me and said “well, can you explain why it is?”

Tzedakis started writing a long email in reply, laying out the basics, before realizing as he was typing that he didn’t have a simple, satisfactory explanation for his student.

Over the next two and a half years, what started as an e-mail to a student morphed into a review of the existing literature, and finally, this week, a paper in Nature with three collaborators from across the globe. In it, Tzedakis and his colleags lay out an answer to his student’s question. Interglacials, they say, can be predicted by just two factors: the amount of sunlight that hits the Northern Hemisphere during the summer and the length of the glaciation that preceded it.

An interglacial is a warm break in an ice age, typically a few thousand years long. We’re technically in an interglacial right now, which started about 11,700 years ago.

Figuring out what triggers shifts between glacial periods—when glaciers grow—and interglacials, when they retreat, can tell us more about how the Earth’s climate works, especially in relation to the sun.

The Earth’s orbit varies in distinct and predictable ways as it goes around the sun. Over time, it might have a more elliptical orbit or have its axis tilted more towards or away from the sun, and throughout everything, the Earth’s axis wobbles slowly. All these changes take place over tens of thousands of years, but they can change the amount of sunlight that the Earth gets in the Northern or Southern Hemisphere, and these changes in the distribution of the sun’s heat are closely tied to the rise and fall of ice ages.

But while the Earth’s orbit changes in a predictable way, the geologic record shows that glaciations aren’t so consistent. Between 2.6 and 1 million years ago, glaciations followed a simple pattern, rising and falling in a cycle about every 41,000 years—or roughly the same time that the axis of the Earth tilted toward and away from the sun.

Then, around 1 million years ago, glaciations got longer, with cycles lasting for about 100,000 years. The incoming solar radiation hadn’t changed, but something else had.

Tzedakis accounts for the change by using the length of the glaciation as a variable. While his paper and formula don’t go into why the length of glaciations changes, he points out that larger ice sheets are less stable than their smaller counterparts.

“The longer the glacial period is, the more unstable an ice sheet becomes,” Tzedakis says. This could be because of any number of reasons. The ice might be structurally unstable in larger forms. It might venture into southern latitudes where it can soak up more rays, or accumulate more heat-trapping dirt and dust. Or it might push the surface of the Earth down so much that it reaches warmer elevations where it is more likely to melt. Whichever reason it is, Tzedakis says that a larger ice sheet reduces the amount of sunlight needed to cause a deglaciation—almost like a discount rate.

But as is often the case, more research is needed.

“This provides a simple rule, but it doesn’t tell us in detail what was happening with the climate system,” says Peter Huybers, a climate scientist at Harvard who was not involved in the study. “It’s a starting point by which to better understand what causes deglaciation and why those deglaciations changed.”

And unfortunately, understanding how glaciers behaved in the past is not going to help us predict how the climate will change in the future.

“I think current climate change means that the whole system has been disrupted,” Tzedakis says “We’re not going to have glaciation for a very long time.”

Huybers also points out that the changes that we see today are simply occurring on vastly different time scales to previously observed changes, and different climate mechanisms can’t easily be compared to each other.

Looking further into the past

Piecing together the behavior of the Earth’s climate in the past is incredibly difficult thanks to the huge number of variables involved, but piecing together the motion and changes of the planet’s orbit is no picnic either. We know how the planets behave in relation to the sun and to each other today, but venturing millions or billions of years into the past, it can be tricky to figure out what orbital changes may have impacted the Earth’s climate.

But looking down into ancient deposits of clay, mud, and sand can help researchers puzzle out the mysterious past of the planet.

In another paper published in the same issue of Nature, researchers found layers of sediments that date back millions of years—to the Cretaceous period—showing evidence of climate changes likely caused by shifts in the orbital patterns of our planet, different patterns than those we observe today.

That lends weight to an old idea that the orbits of the planets, far from being clockwork and constant over millions of years, change slightly, a situation that planetary geologists term ‘chaotic’. That doesn’t mean that the planets are cruising all over the solar system like bumper cars. Chaos, in this case, simply means that tiny changes in all the myriad conditions of the solar system can cause changes in orbit over time, which can be difficult for researchers to model without having exact details of the masses and movements of the planets.

This paper supports the chaotic theory of the planets, says Stephen Meyers, one of the authors of the paper, “But it also shows that the geologic record has the key information to measure that chaos and correct for it,” Meyers says.

The two studies look at very different time scales; thousands of years vs millions, But both help show just how connected the day-to-day climate of the Earth is to the motions of the planets within our solar system.

“To me, what’s fascinating is the interlink between geology and astronomy. Looking up at the stars and looking down at the rock, those fields are informing each other,” Meyers says.