A giant landing for mankind 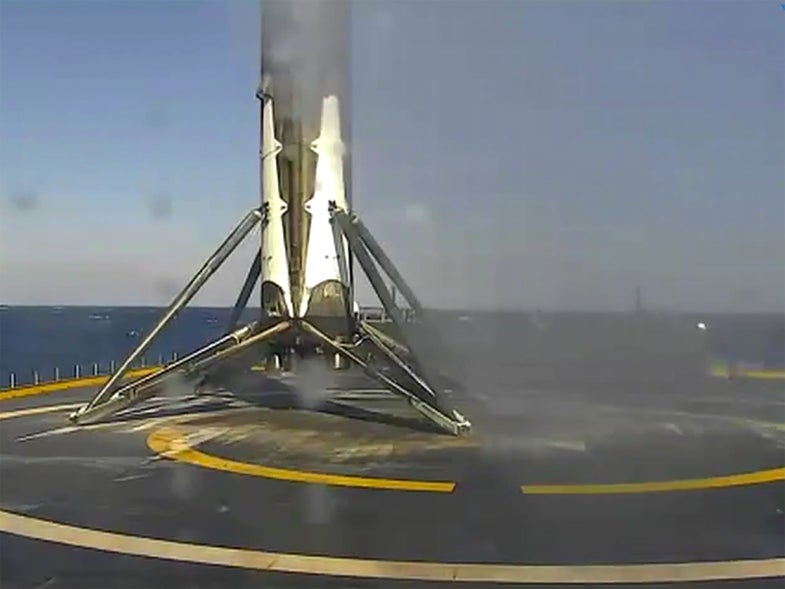 There couldn’t have been a more perfect launch than yesterday’s. The sun was shining, a gentle breeze was blowing, and SpaceX’s Falcon 9 rocket took off right on schedule. As we watched from a few miles away, the glare of the rocket’s flames was searingly bright, hard to look at but impossible to look away from, like the sparklers kids play with on the Fourth of July. The sound, too, was like Independence Day, the boom and shake of a thousand fireworks going off, crashing through the sound barrier.

The cargo made it safely into orbit, where it’s on its way to the International Space Station. But the real magic was in what happened after the launch. For the first time ever, the Falcon 9 came down for a gentle (non-explosive) landing on a drone ship. The achievement is critical in developing reusable, relatively low-cost spaceflight.

“It’s another step toward the stars,” said Musk during a press conference.

Traditionally, rocket boosters fall into the ocean after launch, never to be used again. But Musk often compares that to throwing away an airplane after every flight. Reusing the booster could shave millions of dollars off of launch costs, and the first step to that is getting the boosters back to Earth safely.

“It’s another step toward the stars.”

SpaceX landed its rocket on solid ground in December, but landing on the drone ship was key to SpaceX’s reusability strategy.

That’s because about half of all launches bring the rocket over the ocean. After that, the rocket doesn’t have enough fuel to turn back around and head for land. The autonomous ship gives SpaceX a movable landing pad, but landing on it proved difficult. It’s akin to a jet landing on an aircraft carrier—the target is small and moving—except that the rocket comes down at about 17,000 miles per hour.

Unlike the booster that landed on land last year SpaceX is planning to reuse this one. After the drone ship Of Course I Still Love You brings it back to port, the company will test fire the engines about 10 times, and if all is working well, they could fly it again as soon as May or June.

Eventually, the company hopes to “hose off”, tune up, and re-launch each rocket in a matter of weeks, Musk said. If they can do it on a reliable enough basis, it could shave millions of dollars off the cost of launching.

It costs about $60 million to build a rocket, but just 2 or 3 hundred thousand to refuel it. Inspecting and tweaking each booster could cost some time and money, but Musk says they’re expecting reusability to bring costs down “100-fold”.

It should be noted that the space shuttle program had similar goals—it was hoped that reusing the vehicle and launching often would bring down costs over time. Unfortunately, the price stayed constant around $450 million per flight.

But SpaceX has already changed the face of spaceflight and ISS resupply with its $61.2 million dollar launches, compared to $225 million for its competitor ULA.

If reusability pans out as well as Musk hopes, a 100-fold decrease would bring the cost of each launch from roughly $60 million to about $600,000.

That figure isn’t counting the cost of having to build new rockets—Musk estimates that each rocket could be good for 10 or 20 launches. But even if it’s somewhere in that ballpark, such a dramatic price cut would revolutionize access to space, opening it up for business, research, and tourists. It would make the Falcon 9 into the Model T of space exploration.

There’s still a lot that could go wrong before that happens.

By the end of this year, SpaceX intends to amp up its launch frequency to every other week, and most of those launches will be accompanied by landing attempts. So if the reusability plan really works to cut costs, we should know it sooner rather than later.

Correction: This article was updated to correct the refueling cost and reusability discount.