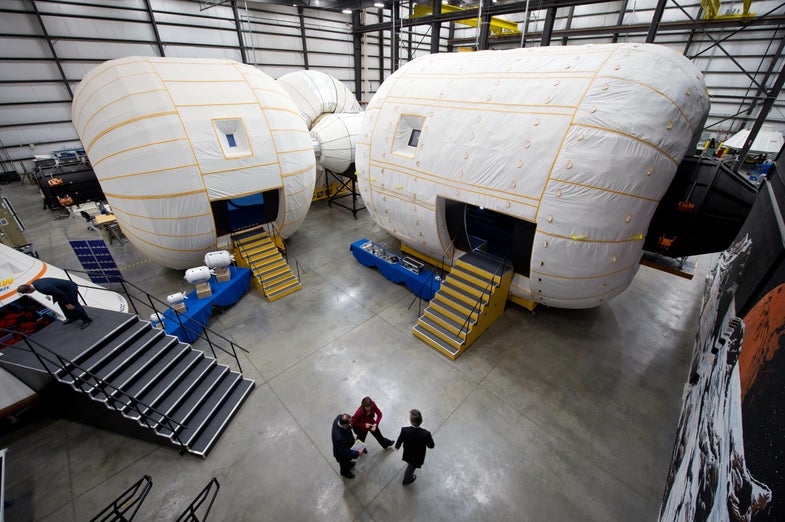 The inflatable space habitat from Bigelow Aerospace is trying to launch early as 2018. The company will begin sending its 110-cubic-meter BA-330 modules into orbit to become space stations and hotels. NASA
SHARE

The first human-rated inflatable space habitat just made it to the International Space Station last weekend, but the man behind it is already dreaming even bigger. Robert Bigelow, the hotel baron owner of Budget Suites and founder/president of Bigelow Aerospace (makers of the BEAM habitat that’s set to be attached to the space station), announced tonight that his spacefaring company has struck a deal with the United Launch Alliance (ULA) to begin sending larger inflatable space habitats up into orbit in 2020.

The habitat in question would be the B-330, which offers 330 cubic meters (12,000 cubic feet) of volume, compared to the smaller BEAM (565 cubic feet). It would get up into space not aboard a SpaceX Falcon 9 rocket, as the BEAM did, but rather on the top of one of ULA’s Atlas V rockets. And while the press release for the announcement touts the fact that such a habitat could be added to the space station, or used as a free-floating craft for experiments and research, it seems Bigelow has much grander ambitions. As several space reporters at the announcement have shared on Twitter:

Four years is a short timespan when it comes to the history of space travel, but long enough for Bigelow and ULA’s plans to change, so we’ll see if the goal really happens when they say it will. As for the Disney Space Station, that could take a little while longer. But Disney is no stranger to creating outlandish resorts, and the simple fact that Bigelow has already managed to get a smaller inflatable space habitat up into orbit gives me some hope that this ambitious, slightly kooky idea could become reality one day soon, too.