In a Fight Between a Pilot and his Aircraft, Sometimes the Rocket Plane Wins

When Mike Adams called from the X-15 that he was in a spin, no one listening on the ground could... 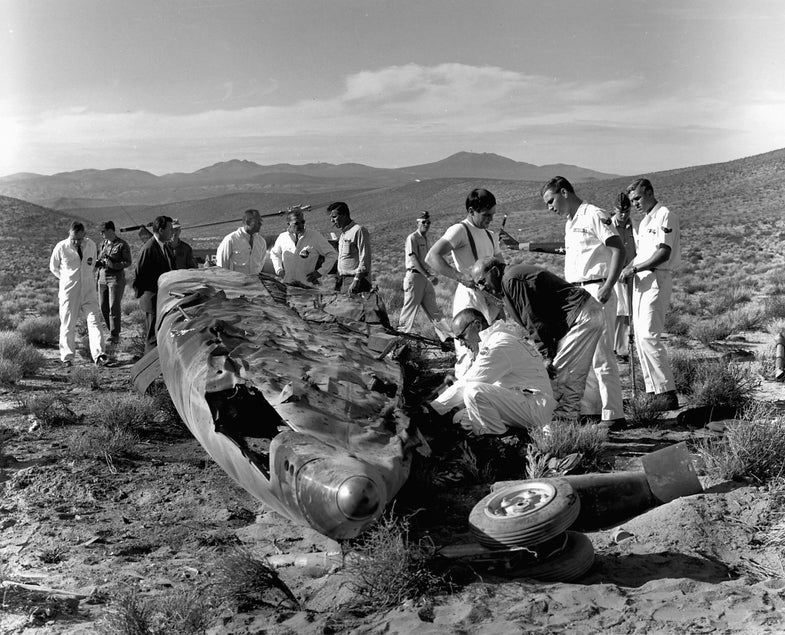 When Mike Adams called from the X-15 that he was in a spin, no one listening on the ground could believe it. The rocket-powered airplane was traveling around four times the speed of sound in the thin upper atmosphere. How could it be spinning? His wife and mother, both at Edwards that day, were quietly led out of the viewing area adjacent to the control room while ground crews tried to figure out what was going on. Less than a minute Adams’ first mention of a spin, telemetry from the aircraft ceased. Another minute later chase planes saw dust kicked up in the desert below. On November 15, 1967, Adams became the X-15’s first and only victim. 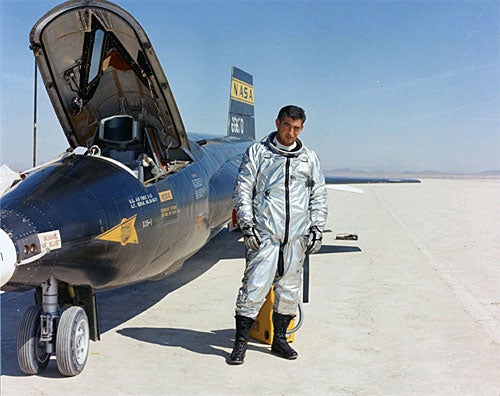 Adams stands next to the X-15

A graduate of the Experimental Test Pilot School at Edwards AFB and the Aerospace Research Pilot School, Mike Adams joined the X-15 program in July of 1966. By that point, the program was starting to wind down. The record-setting speed and altitude runs had been made, meaning the X-15 was used increasingly as a research testbed. On the X-15-3 the morning of Adams’ final flight, his seventh in the rocket aircraft, there were seven experiments on board, all classified as scientific, separate from the X-15 program.

There was a solar spectrum measurement experiment designed to gather solar spectrum data from outside to atmosphere to help scientists correct for atmospheric absorption. The ultraviolet exhaust plume experiment measured the UV characteristics of the rocket plane’s exhaust against the Earth’s sky. The micrometeorite collector was a small experiment mounted in the wing pod. When exposed at a high altitude, it would measure the size, velocity, and frequency of micrometeorite strikes. The tip pod camera was designed to measure deflections from a vantage point on the fuselage. The Saturn booster ablative test had material installed on the aircraft’s speed brakes to see how it would fare during hypersonic flights.

The last experiment was the traversing probe experiment. A small, needle-like probe was cycled in and out of the tip pod nose cone to measure the distance between the bow shock and the nose cone. 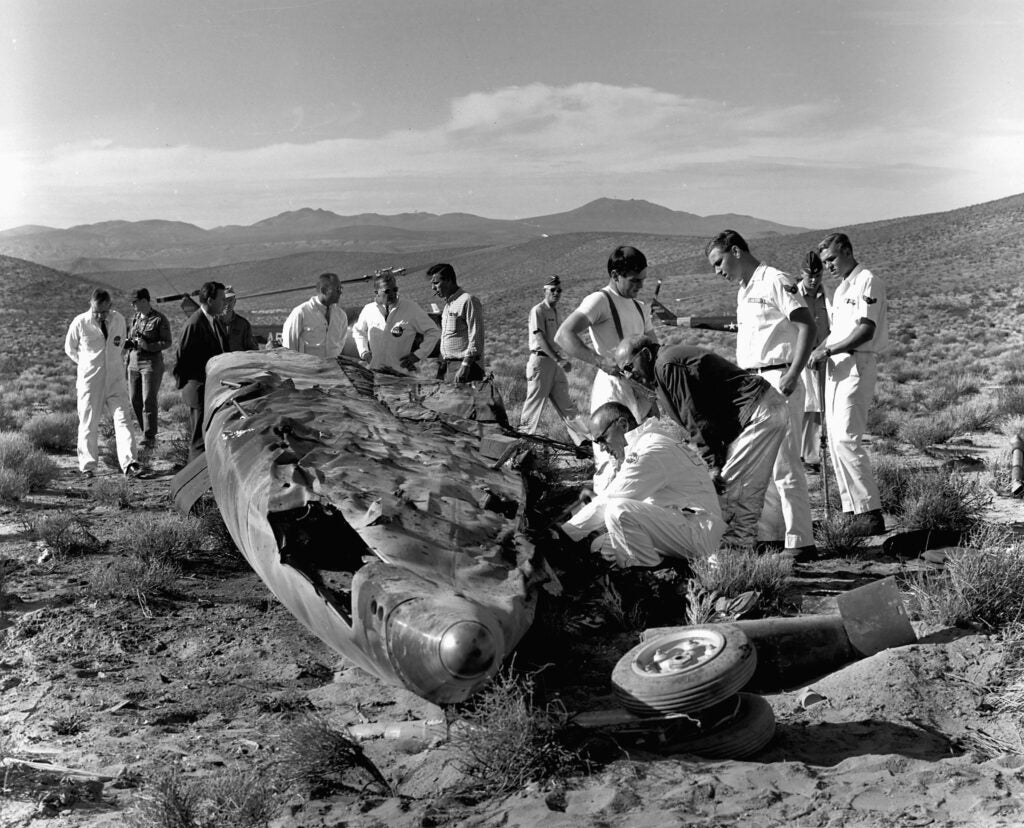 The B-52 carrying Adams in the X-15 left the Rogers Dry Lakebed slightly behind schedule on the morning of November 15. It was an uneventful ascent marked only by one C-130 rescue aircraft taking off slightly late. This delayed the X-15’s launch enough that Adams had to reset his pitch and roll attitudes to compensate for the change in the Sun’s position.

At 10:30, the X-15-3 separated from the B-52 over Delamar Dry Lake. Adams ignited his rocket engine and began climbing to his planned peak altitude of 250,000 feet. But as he passed through 85,000 feet, an electrical disturbance from the traversing probe experiment caused a transient motion in the reaction control system motors, deactivating them and simultaneously affecting the inertial system computer and the boost guidance system. The reaction control motors were vital on this flight, responsible for controlling the small hydrogen peroxide jets mounted on the X-15’s nose and wings to maintain its attitude when flying above the atmosphere. Without them, Adams wouldn’t be able to keep the X-15 oriented properly. Warning lights in the cockpit signaled that there was some trouble on board.

But Adams stuck to his flight plan, shutting off his engine and letting momentum carry him along his ballistic flight path. Traveling slightly faster than planned, he rocked the X-15’s wings for the ultraviolet exhaust plume experiment and extended the solar spectrum experiment. The excess speed carried him to a slightly higher peak altitude of 266,000 feet. At that point, high above the atmosphere with troubled reaction control motors unable to resist changes to the plane’s motions, the aircraft’s heading began to drift. Adams made yaw control inputs that only pushed the X-15’s heading further off to the right. By the time gravity took over and he began falling towards the Earth, his heading had drifted by 90 degrees. And no one on the ground knew. With the aircraft was still outside the atmosphere, a change of heading didn’t affect the ground tracking. As he passed through 230,000 feet, the X-15’s heading had drifted by 180 degrees and it began to spin. There was no known recovery techniques for a hypersonic spin. No one even thought it could happen, which is why the call garnered a reaction of disbelief with the ground crews. There was no wind tunnel or other experimental data that said a hypersonic spin could happen, but suddenly Adams was in one.

After falling in a spin for 15 seconds, the thicker atmosphere began helping the aircraft straighten out, but then the rear stabilizer began oscillating, forcing the X-15 to pitch and roll violently. By the time he fell through 80,000 feet, the oscillations had become so strong that the X-15’s fuselage buckled from the sideways forces. In the cockpit, Adams was subjected to forces as high as 13 gs.

Less than five minutes after launch, one of the chase planes reported seeing dust in the desert, the unmistakable sign of a crash. The foreword section of the aircraft was found upside down and flattened by the impact, its nose gear ripped out. At 11:02, Adams’ remains were found in the cockpit. The subsequent investigation found that technical and aerodynamic problems had added significantly to the pilot’s workload, but vertigo had also been a contributing factor as well. Something Adams had experienced before, it was the only explanation to why he didn’t notice his heading was drifting. It’s possible he downplayed the severity of his vertigo. Other X-15 pilots had experienced the same thing, and no one wanted to be grounded from flying.

The accident investigation board recommended that a telemetered heading indicator be installed in the control room, and also that future X-15 candidates be medically screened for sensitivity to vertigo. The crash also prompted NASA to install a ground-based “8 ball” attitude indicator in the control room to show controllers realtime pitch, roll, heading, angle of attack, and sideslip data.

The X-15 program was reevaluated after Adams’ death. Extremely successful to that point, the program was losing support from NASA, the US Air Force, and Congress with future developments like a delta wing X-15 and a scramjet X-15 were stuck in limbo. There were eight successful flights after Adams’ crash. The last attempted flight came on December 12, 1968, but was cancelled due to snow on the dry lakebeds.

Mike Adams was posthumously awarded Astronaut Wings for his last flight. His peak altitude of 266,000 feet translates to 50.38 miles, which is just high enough above the 50-mile mark where a flight becomes a spaceflight.

Sources: “At the Edge of Space” by Milt Thompson; NASA.