It seems not everyone is content to let the legacy of the space shuttle fly away over yonder horizon. Orbital... 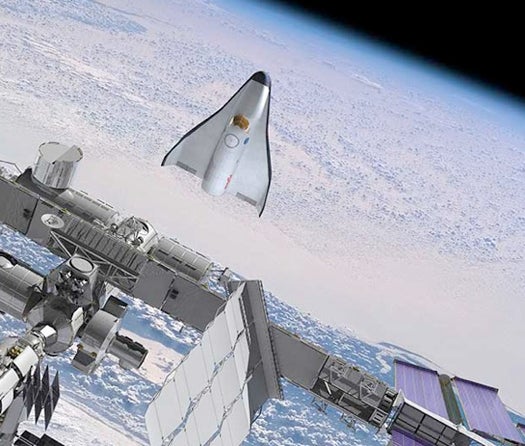 It seems not everyone is content to let the legacy of the space shuttle fly away over yonder horizon. Orbital Sciences Corp. has thrown its hat into NASA’s Commercial Crew Development (CCDev) program with a winged space plane concept very reminiscent of the Shuttle’s design intended to ferry crews to and from the ISS.

The space plane design is a departure from prevailing capsule-based designs favored by SpaceX and other big contractors like Boeing and Lockheed. At about one-quarter the size of the space shuttles, the unnamed space plane has no engines like the shuttles, and it can only carry a crew of four. Like the shuttles, it would ride into orbit on a rocket stack (specifically on an enhanced iteration of the Atlas V). It would dock with the ISS via a hatch in the rear, and after departing the ISS it would glide to a runway landing below.

Orbital sees a reusable space plane design as the cheaper and safer way to move crews to and from the ISS; its “blended lifting body” allows it to move from its orbital trajectory as it re-enters and place it’s point of landing where the pilot wishes. Capsules, of course, come screaming through the atmosphere more or less at their orbital trajectory and rely on parachutes to soften the “splash down” and a recovery crew to locate and pick up the crew.

Both capsules and space planes have their advantages, and neither has a spotless safety record. But it will be interesting to see which mode NASA eventually selects for the next generation of ISS missions. For one, capsules have been fairly reliable since the 1960s, but during the development of the shuttle program the military was keen to have a craft with “cross range” – that space plane capability to move out of orbital trajectory – for possible strategic purposes. The shuttle never flew militarily, but it would be notable if such a consideration still played a role in NASA’s first post-Cold War crew vehicle.

Secondly, Orbital Sciences isn’t the kind of independent, private, “new space” enterprise as, say, SpaceX. It’s a consortium of defense and aviation heavy-hitters: Northrop would build the plane, and the rockets would be provided by United Launch Alliance (read: Boeing and Lockheed).

Of course, first Orbital has to build, launch, and prove out its space plane. SpaceX already has a comfortable head start, having already launched its Dragon crew capsule into orbit aboard its own Falcon 9 rocket and recovered the capsule intact. And SpaceX is wasting no time; the company plans to dock with the ISS on just its second full test-flight, expected sometime in the middle of next year. If it wasn’t already, it’s safe to consider the next space race well underway. 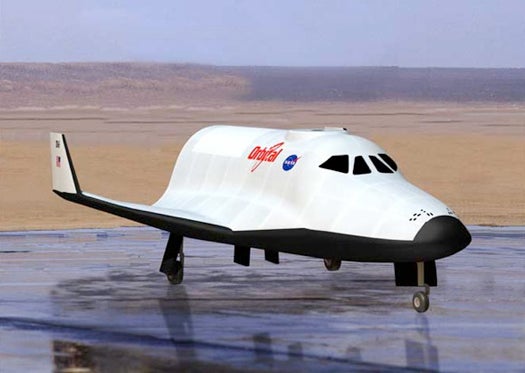