When NASA Repurposed the Vehicle Assembly Building for Parachute Tests

NASA’s Vehicle Assembly Building was designed and built in the 1960s as a space in which the Saturn V rockets... 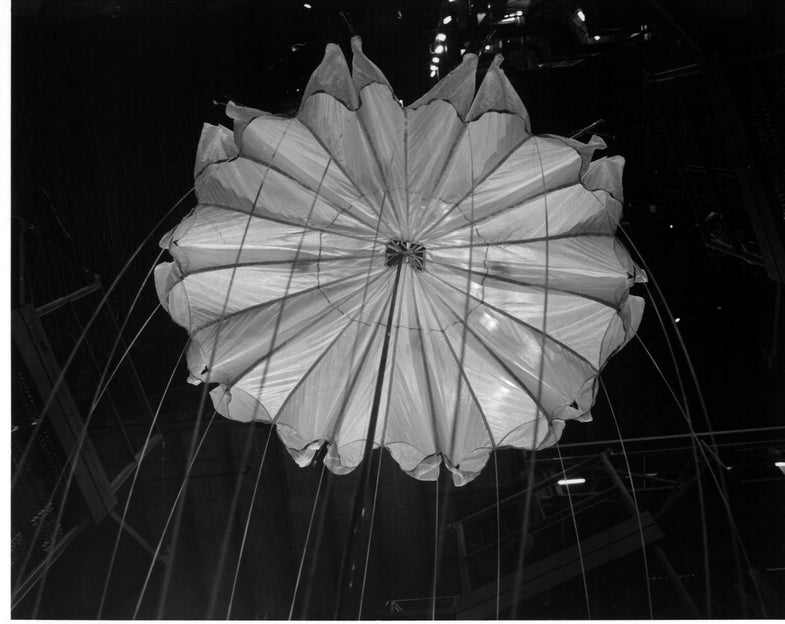 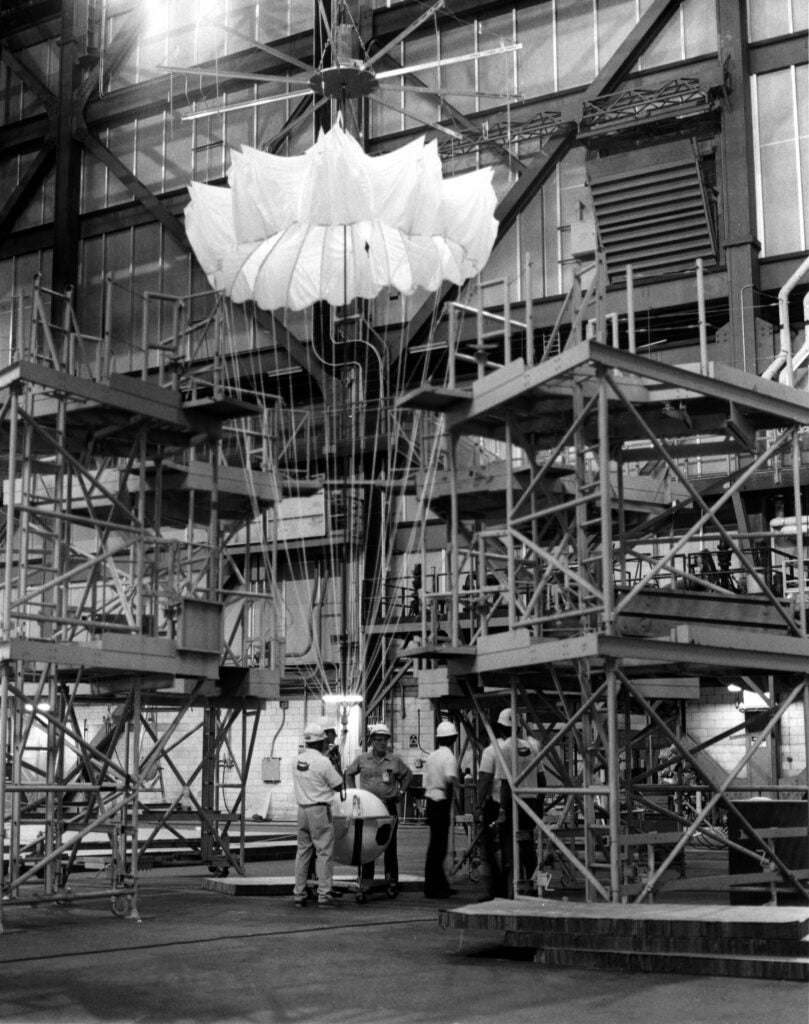 Preparing for a drop test.

NASA’s Vehicle Assembly Building was designed and built in the 1960s as a space in which the Saturn V rockets stages could be checked out before being assembled and mated with their spacecraft. In the years after the Apollo program ended, the VAB continued to serve as NASA’s rockets’ final stop before the launch pad, but it also started hosting some other spaceflight related activities. In the 1970s, the VAB served as the site for parachute tests leading up to NASA’s Pioneer 2 mission to Venus.

The Pioneer 2 spacecraft NASA launched to Venus was a multi-unit system. The core bus was designed to release a series of probes that would fall through the planet’s atmosphere, gather data all the way down until they impacted the surface. The first to be released as the large probe weighing slightly more than 697 pounds. It would in turn release three smaller probes. The smaller probes were sufficiently small that they didn’t need any parachutes to cushion their fall through Venus’ atmosphere, but the larger, heavier probe did need one. Part of NASA’s pre-launch parachute testing for this mission involved drop tests with a scale model spacecraft, and in at a time when funding was starting to dwindle, the VAB’s 526-foot ceiling makes it a fantastic, indoor, wind-free, and cost-efficient drop-test facility. 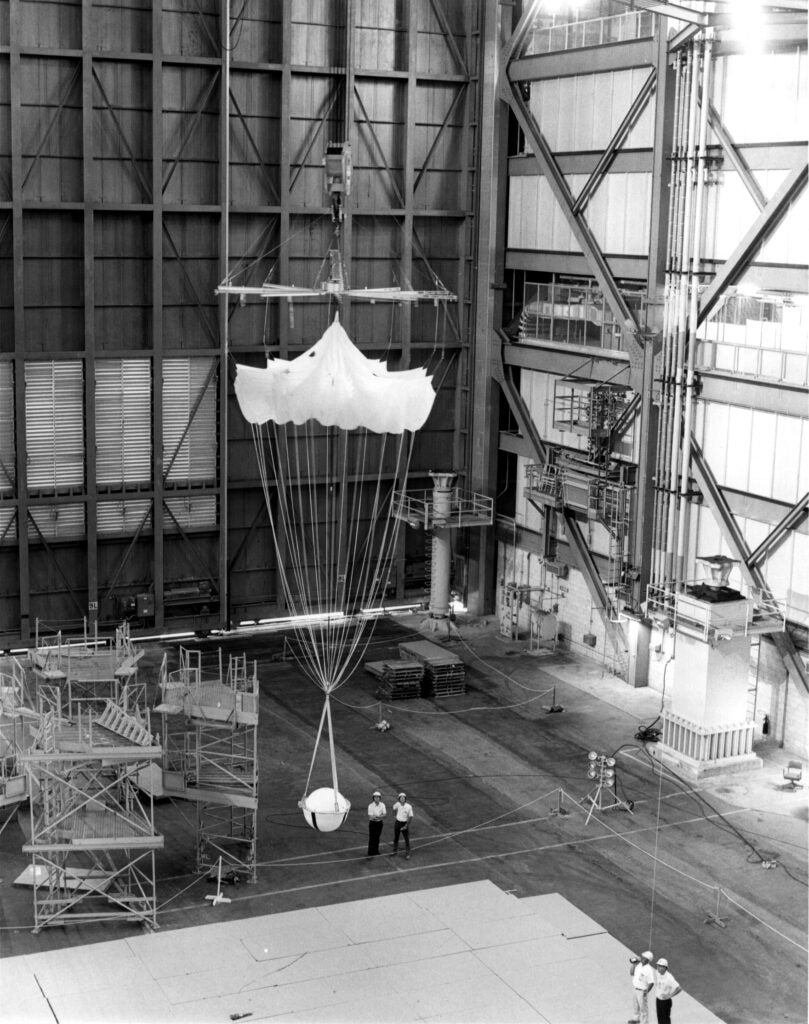 The large Pioneer 2 probe had two parachutes. The first to deploy was a 2.49-foot diameter mortar-deployed ribless guide surface parachute. This in turn pulled out the 16.2-foot diameter main conical ribbon parachute. Both chutes were designed to separate from the probe 30 miles above the surface; atmospheric braking was enough to cushion the probe’s final fall, though it was expected to be destroyed on impact.

Drop testing Pioneer 2’s parachute meant scaling it down. For the VAB drop tests, NASA engineers used a 12-foot diameter chute attached to a simulated pressure vessels weighing 45 pounds and dropped it from 450 feet. A honeycomb piece of cardboard on the floor cushioned the fake probe’s landing. 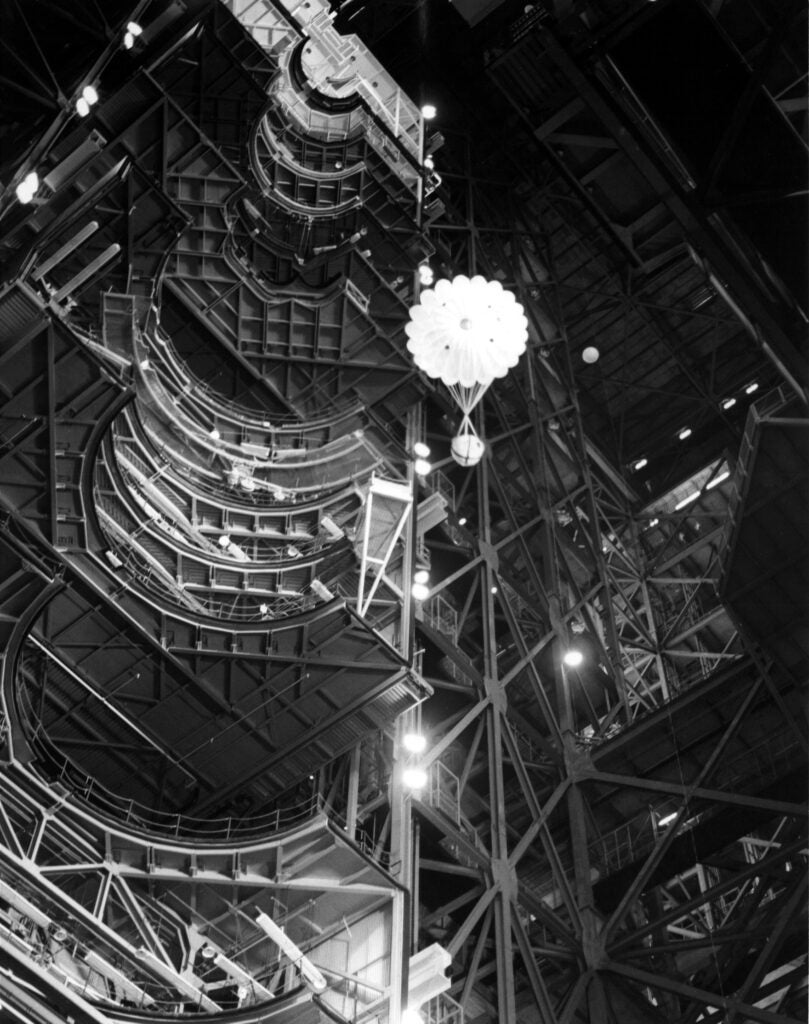 These drop tests ended up being part of Pioneer 2’s extremely successful mission. After one course correction en route to Venus, Pioneer 2 released the large probe on November 16, 1978, nearly 6.9 million miles from the planet. The smaller probes were released three days later, and on December 9 all four entered the atmosphere. Data returned to NASA indicated that both parachutes deployed nominally allowing the spacecraft to unlock some of Venus’ mysteries. Data from the mission revealed very little convection in the Venusian atmosphere between 31 and 6 miles above the surface, and the final 6 miles offered fairly good visibility. The probe impacted Venus traveling at almost 20 miles per hour and went silent, exactly as expected.

Though it’s still primarily a space where big rockets and their spacecraft are readied for launch (and hopefully will be again before long), the VAB reprised its role as a parachute testing facility when engineers used the space for drop tests before launching the twin Viking landers to Mars in 1977.