The researchers studied one village that has only 40 inhabitants. 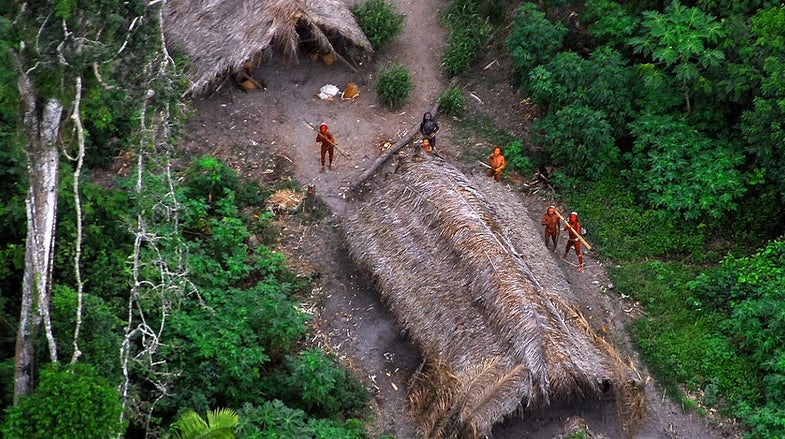 As you can imagine, it isn’t easy to study uncontacted tribes in Amazonia. And the history of western interaction with these tribes is dark indeed, often leading to the destruction of these peoples’ way of life. So researchers have come up with a less invasive way of keeping tabs on them: tracking them via Google Earth.

In a study published in the American Journal of Human Biology, researchers analyzed satellite images of one particular Amazon village on the border of Brazil and Peru, and calculated that it has fewer than 40 inhabitants. “A small, isolated village like this one faces an imminent threat of extinction,” said University of Missouri researcher Rob Walker in a statement. But tracking this and other villages from space could “inform and create boundaries or buffer zones that would allow tribes to stay isolated,” he added.

“Deforestation, cattle ranching, illegal mining, and outside colonization threaten their existence,” Walker continued. “Most of these tribes are swidden horticulturalists and so their slash-and-burn fields are observable in satellite images. But, they do move around, sometimes in response to external threats, and this movement requires constant monitoring if there is to be any hope of preserving their habitat and culture.”

There are somewhere between 70 and 100 uncontacted groups in Amazonia. Brushes with modern society are often violent–one previously isolated tribe was recently forced to relocate after a run-in with drug traffickers, according to The Ecologist.

If you’re curious, here is a video of another isolated tribe in Brazil.