The Potentially Giant Storm Off Florida’s Coast Is Baffling Scientists

Will Invest 99L become a monster, or fizzle out? 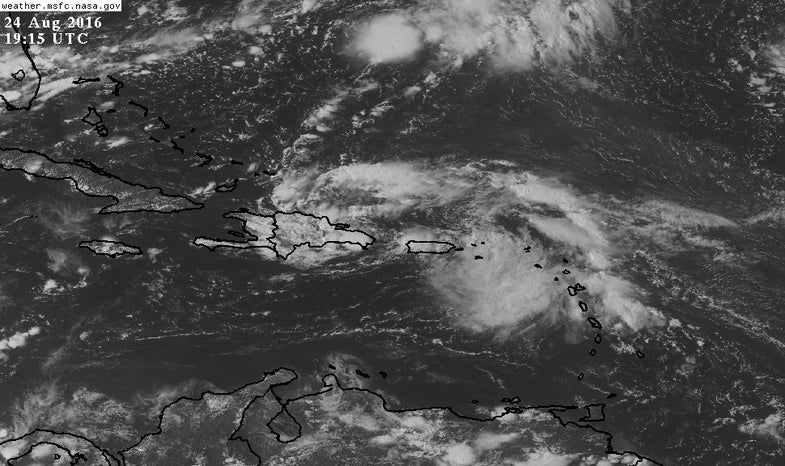 Here's what Invest 99L looked over the Leeward Islands on the afternoon of August 24, 2016, from the point-of-view of a weather satellite. Some weather models initially showed the disturbance developing into a major hurricane or tropical storm. And while the latest forecasts are tamer, it could still causing major flooding in South Florida and the Bahamas. NOAA/NASA
SHARE

How do you warn people in the path of a potential tropical storm or hurricane to get out of the way when that potential storm is nothing but a messy blob of clouds hundreds of miles away, and only several days from possible landfall in the U.S.?

Welcome to the lives of meteorologists this week as they try to deal with the tropical disturbance making its way across the Leeward Islands. Some weather models blow the disturbance up into a major headache for lots of people along Atlantic and Gulf Coasts, while other models say that the disturbance will fall apart into nothing. 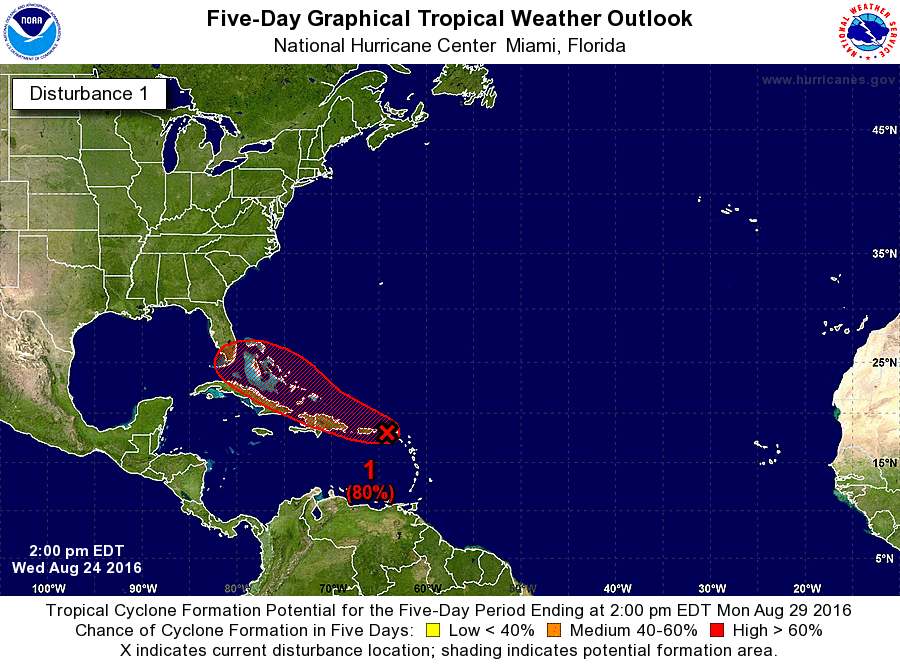 The National Hurricane Center’s projected path of Invest 99L over the next five days.

A Hurricane Hunter aircraft investigating the disturbance on Wednesday afternoon found that it had tropical storm force winds peaking around 50 MPH in some of the squalls, but the intrepid scientists flying through the storm weren’t able to find a center of circulation at the surface. A tropical cyclone can’t exist without a defined wind circulation near the ground. There will be frequent flights into the system in the coming days if it holds together, hopefully giving us some better insight into how this disturbance is evolving.

This atmospheric question mark leaves us in a sort of limbo for at least the next day or so. What do you do when you’re less than five days from a potentially dangerous storm striking heavily populated areas when that very storm hasn’t even formed yet? Following the developments of this messy disturbance this week is akin to how you should react when the fire alarm goes off—it’s probably nothing, but you have to go through the motions anyway just in case the building really is on fire.

Predicted rainfall between August 24 and August 31, 2016, per NOAA’s Weather Prediction Center. This will likely change as the intense and track of the system is nailed down.

What we know right now is that the experts at the National Hurricane Center say there’s a high chance that the disturbance will develop into a tropical depression or tropical storm within the next couple of days as it moves northwest toward the Bahamas, and we know that a ridge of high pressure over the Mid-Atlantic will probably deflect the system toward the west into Florida. This means that storm or not, Florida will likely see some heavy rain and flooding late this weekend into early next week.

When you’re tracking a storm that has yet to develop, you have to go almost solely on current weather patterns and weather model guidance to tell you what the non-existent feature could do in the future. That’s not so easy to begin with, but it’s even worse when the world’s two major weather models—the ECMWF (“Euro”) and NOAA’s GFS—show almost diametrically opposed solutions.

Four of the last five runs of the European model have shown a tropical storm or hurricane swirling to life in the Bahamas later this week, cutting across Florida late this weekend and taking a track in the Gulf of Mexico scary enough to make your heart leap into your throat. If you’ve seen any panicked posts on social media about this disturbance, odds are the folks were referencing the unsettling scenarios shown by this model.

Wednesday afternoon’s run of the Euro shows a storm hitting Florida, but it’s not as intense or downright scary as its previous runs. Across the pond, the GFS model kills this system before it has a chance to develop. The major American weather model has been consistent in not letting this disturbance strengthen beyond a tropical depression in the Bahamas before it falls apart.

Frustrating as it is, we’ll have to take a wait-and-see approach to find out what’s going to happen next. Meteorology is an imperfect science. There’s still quite a bit we don’t know and our technology has some pretty big limitations, especially in a complicated situation like this. If the disturbance develops into a tropical depression or tropical storm, the models will get a better fix on the system and hopefully they’ll be able to help us figure out what’s going to happen.

As always, you should keep an eye on the latest forecasts and be prepared for whatever might happen. Prepare for potential flooding in Florida regardless of what the storm does. Think over what you’ll have to do if you’re forced to evacuate. Come up with a plan for your pets in case the shelters don’t accept animals. Do you have enough food and water to make it at least a few days if your electricity goes out? Do you know multiple ways to get to work or school or home if your normal route is flooded out?

Even if this storm doesn’t come to fruition, it’s always better to be prepared than to stare down the updraft of a storm with no clue what to do. Plus, even if it doesn’t happen this time, you’ll be that much more prepared for the next time you’re not so lucky.