Bats Listen For Others’ Snacking Sounds to Help Them Find Food

When the guy in the cubicle next to you microwaves his tikka masala or tears open a bag of chips,... 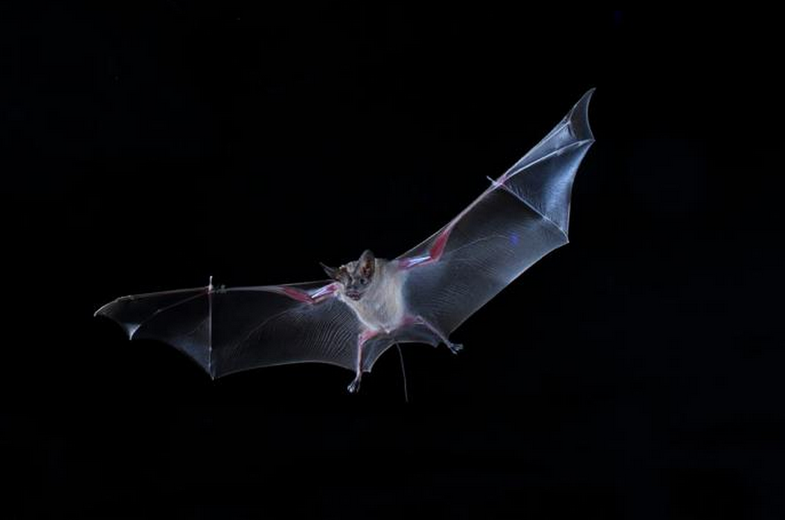 When the guy in the cubicle next to you microwaves his tikka masala or tears open a bag of chips, your nose and ears perk up — food. Your senses trigger your brain to, maybe, head for the break room searching for a snack of your own, or even steal some of his chips. (Or maybe you just get annoyed and tell him to eat elsewhere.)

For bats, the sounds of others’ eating is a benefit, not an annoyance. Bats follow other bats’ signals to find food of their own, a recent study says.

“When you sit in a dark cinema theater and someone opens a bag of chips, everyone in the theater knows that someone is eating chips and approximately where that someone is,” says prolific bat researcher Yossi Yovel of Israel’s Tel Aviv University, in a statement. “Bats work similarly.”

Bats evolved echolocation to help them hunt, a unique ability rare in the animal kingdom. But it’s good for more than just the bat that’s using it. Other bats can eavesdrop on their companions’ echolocation calls, using them to zoom in on a food source they otherwise might have missed.

Yovel and colleagues developed tiny GPS trackers capable of recording ultrasonic calls. They attached these to greater mouse-tailed bats (Rhinopoma microphyllum), which roost in huge colonies numbering into the thousands and often hunt as a group. They found that bats tended to stick together while foraging for food, staying within 150 meters (about 490 feet) of other bats 40 percent of the time. This happened even though such close proximity could hinder the hunt.

When too many bats flew close together, foraging wasn’t as successful, suggesting bats were interfering with each other’s sonar. They weren’t jamming each other, exactly, Yovel and colleagues write. It’s more like they were crowding each other out. Instead of chirping to find insect prey, bats had to echolocate each other to avoid collisions. “Such dense situations would probably require sensory attention, making the detection of tiny insects difficult for short periods,” they write.

So why would they continue to stick close together? Echolocating bats constantly chirp ultrasonic calls, which get faster as a bat closes in on an insect. All these calls provide constant information, allowing the bats to effectively work as a sensor array, Yovel and colleagues write.

A single bat’s sonar can track objects within about 10 meters (32 feet), but a bat can hear another bat’s sonar from 160 meters (525 feet) away. So eavesdropping improves a bat’s hunting ability, even though it might have to employ some temporary aversion tactics to avoid crashing with other bats.

This a sensory trade-off is probably not unique in the animal kingdom, the authors note. In birds that search for seeds on the ground, the visual detection range of a seed is much shorter than that of seeing a pecking fellow bird, they write: “Birds can thus gain from searching together.” Maybe that’s why we’re so finely tuned to hearing when someone else is eating.

The paper was published in the Jan. 8 issue of Current Biology.