Horses Can Learn To Communicate Specific Needs To People

These trained horses got picky about their blankets 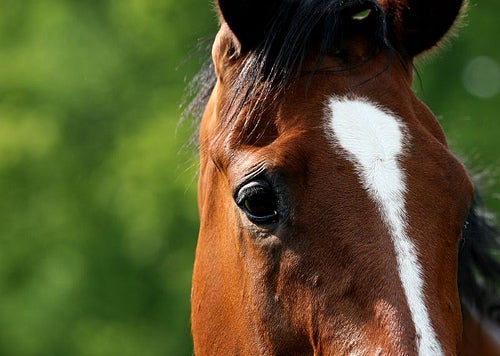 Last week, we learned that pigeons can kinda-sorta read. Next up in the roster of animals that we might be concerned about reading our newspapers or staging a hostile takeover of humanity: horses.

A study published in Applied Animal Behaviour Science examines how horses were taught to use visual symbols to communicate whether they wanted a blanket on or off. They trained 23 riding horses kept in two neighboring stables in Mid-Norway, some of which were trained in show jumping, others as carriage-pullers. All of the horses were accustomed to wearing a blanket at some point, whether only in extreme cold or rain, or when it got chilly in the non-summer months.

They were presented with three symbols that were meaningless to horses, and taught in a series of 10 steps to freely touch their noses to the corresponding choices: “No change,” “blanket on,” or “blanket off”:

Around training day 11, most of the horses could tell the trainers what they wanted. By the end of the study, on day 14, all 23 were making conscious communications about their preferences. Their choices weren’t at random, because they chose to leave off the blankets when the weather was pleasant and put on blankets when it was wet or cold.

Another result of the training: horses were eager to learn. “When horses realized that they were able to communicate with the trainers, i.e. to signal their wishes regarding blanketing, many became very eager in the training or testing situation,” the researchers wrote in the study. “Some even tried to attract the attention of the trainers prior to the test situation, by vocalizing and running towards the trainers, and follow[ing] their movements. On a number of such occasions, the horses were taken out and allowed to make a choice before its regular turn, and signaled that they wanted the blanket to be removed. It turned out that the horses were sweaty underneath the blanket.”

What’s next for horse literacy? As we saw in pigeons, recognition of symbols and meaning is a step toward word formation. We’ve already seen what could be evidence of a horse-pigeon alliance:

What could they be plotting?