Sometimes evolution creates some wacky organisms, but they’re only weird to us. 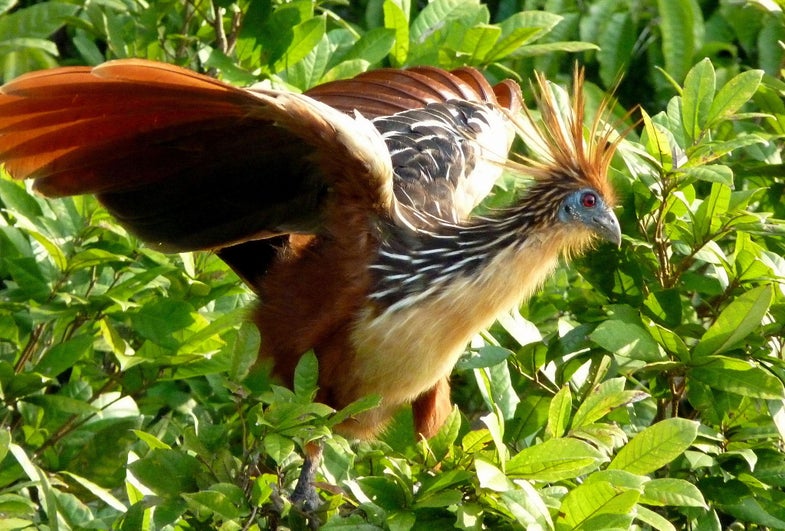 You have evolution to thank for every bizarre-looking bird in existence. Sexual selection is a powerful tool for breeding the brightest, fluffiest feathers—if the lady birds like ’em, males will keep ’em.

It’s easy to forget that non-sexual selection can create stranger adaptations—ridiculous appendages and odd proportions that we giggle at—that are in fact no less useful than pretty plumage. It’s possible that even T. rex arms served some purpose. A recent presentation at the annual Geological Society of America meeting suggested that their stumpy yet powerful arms may have been useful slashing tools, though paleontologists aren’t entirely convinced. Jaws seem far more useful, especially given the short range T. rex would have had with its front claws. Useful or not, the giant dinos did alright for themselves, barring that whole meteorite thing. But longer arms wouldn’t have helped them prevent worldwide destruction.

The physiologies that we find absurd are only odd because we see them from a human point-of-view. Here are just a few of the most ogle-worthy animals—and the reasons they look so strange. 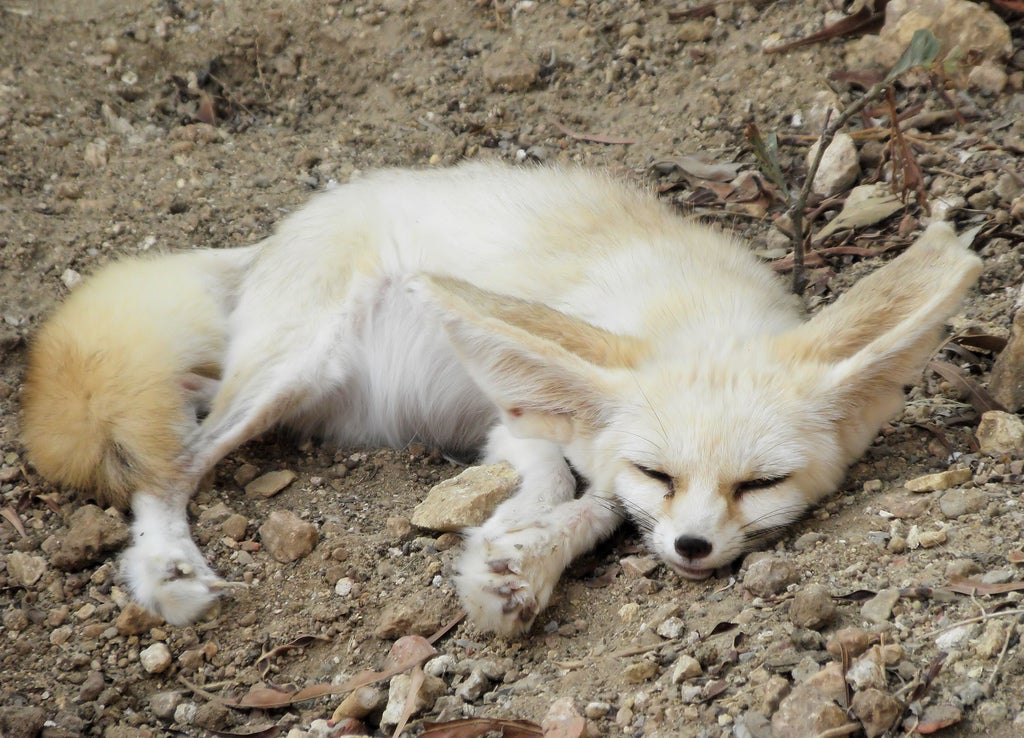 Such a sleepy lil guy.

Like a German Shepherd puppy, this canine has freakin’ enormous ears and is unbearably adorable. But unlike a dog, the fennec fox doesn’t outgrows its oversized appendages—it uses them to survive. The giant satellite dishes on top of its head allow the fennec fox to hear tiny mammals and insects crawling around underground, which it can then dig out. It also helps the fox to cool off in the Sahara desert, since each ear is packed with blood vessels close to the surface to release body heat. 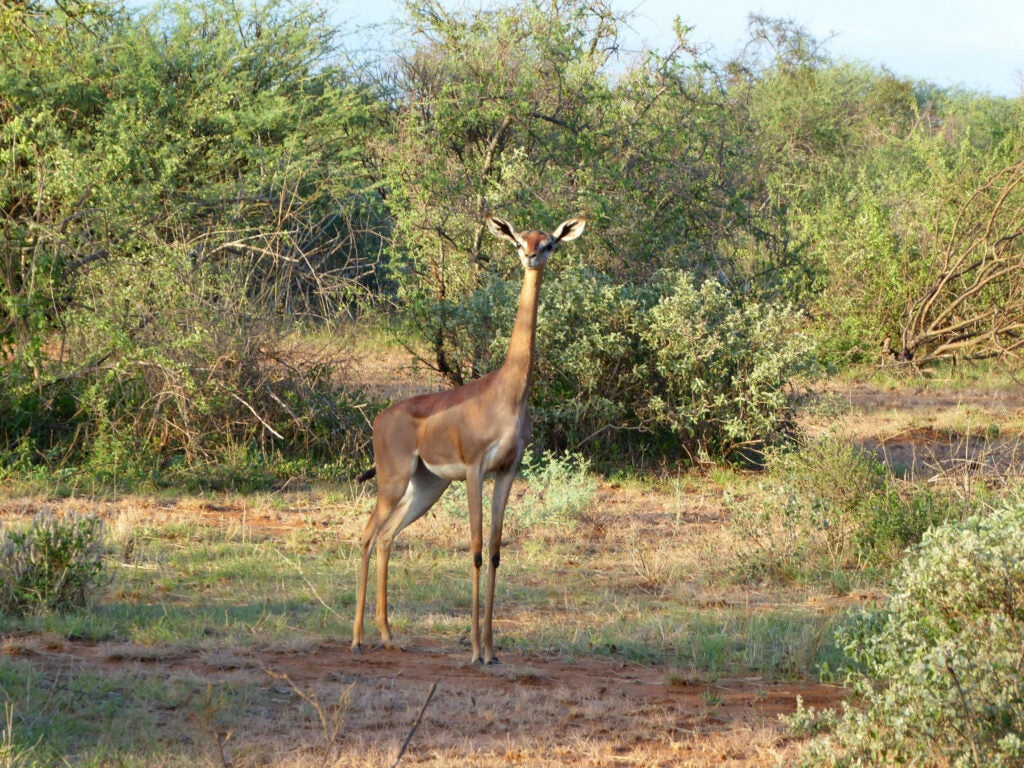 Cross a deer and a giraffe and this is what you’d get.

These goofy guys are also known as giraffe gazelles, and appropriately so—they have elongated necks for the same reason that giraffes do: to eat tall trees. Though neither animal got their elegant necks by stretching (sorry, Lamarck), their stature really does help them reach food that other animals can’t access. Standing upright, they can reach leaves over six feet off the ground, and their adorable pointy mouths help them pull munchies from between thorns. 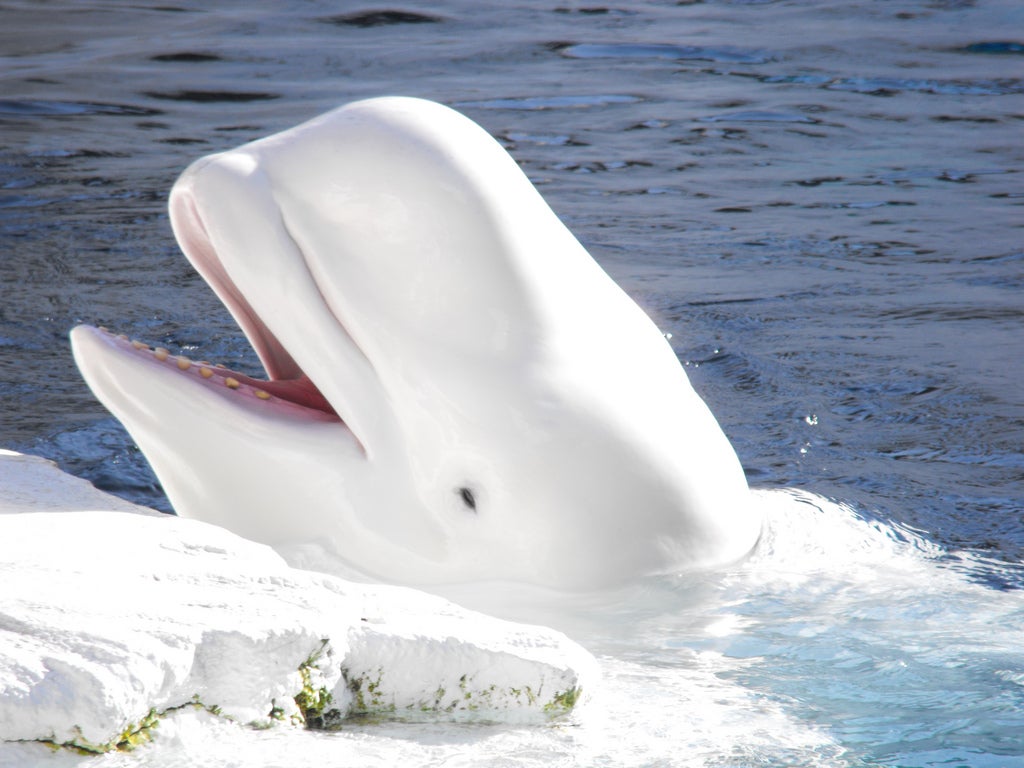 How can you not smile looking at that face?

Belugas already look kind of doofy, and they get even sillier when they waggle their melons—yes, that lump at the front is actually called a melon. That’s the term for the echolocation organ that many whales have, but in belugas is deformable. They change its shape and waggle it to adjust the sounds they can make and to direct noises in particular directions, since belugas are the most vocal whales. They depend on these variable vocalizations to communicate in the thick Arctic ice. 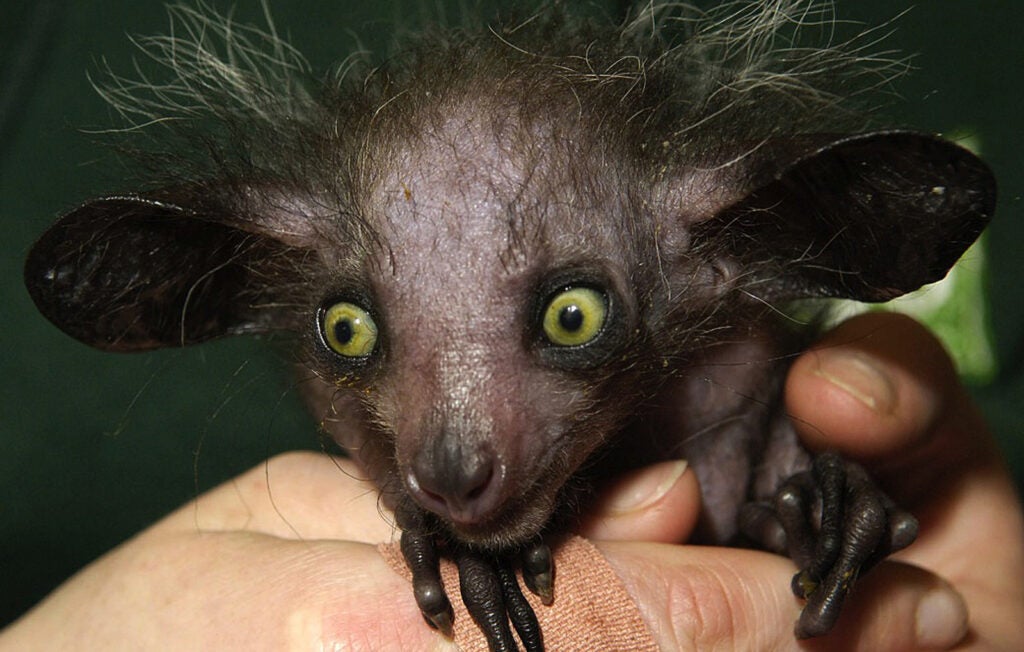 So sorry to burden you with this mental image forever, but aye-ayes have the weirdest adaptation of all. They use those gross stick-like fingers to find grubs by tapping on trees and listening carefully. Once it gnaws a hole into the bark with its horror-movie teeth, it can slip a long middle finger in to pull the little suckers out. It’s kind of like a primate version of a woodpecker, except, you know…more upsetting. 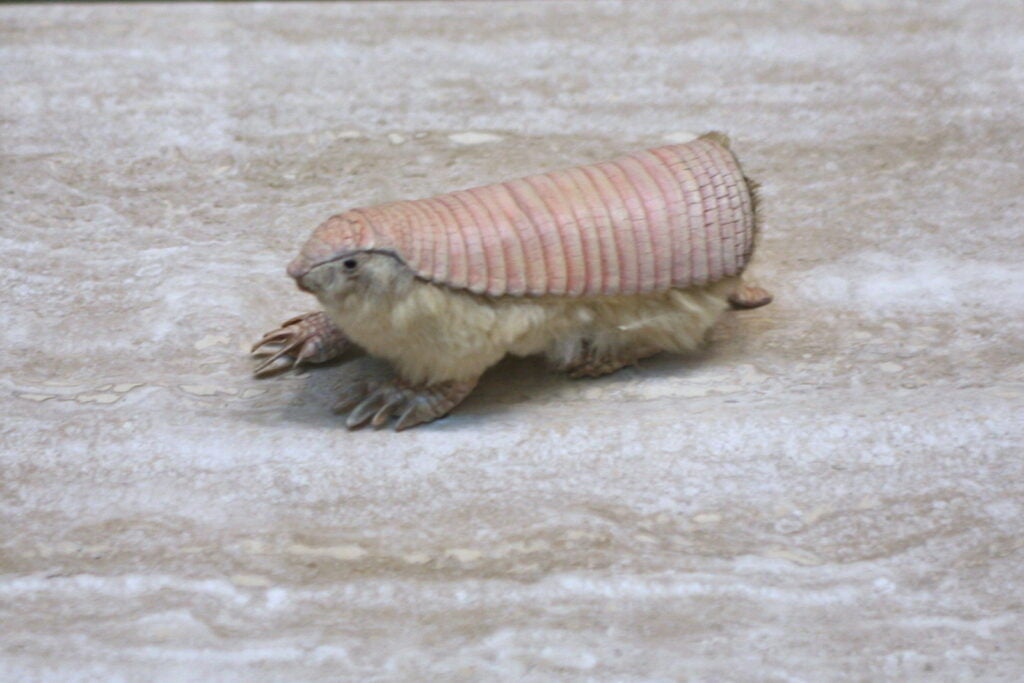 This is not what you expect in a fairy

This is not a fairy you’d want visiting your room at night, but it’s still oddly sweet looking. Those claws may look far too big and unwieldy for its little body, but they actually allow it to dig so fast that its nickname is the “sand-swimmer.” And all that floofy hair is super fine because the armadillos live in the Argentine plains, where it can get frigid at night even when it’s hot during the day—the many hairs help the pink fairy to thermoregulate. 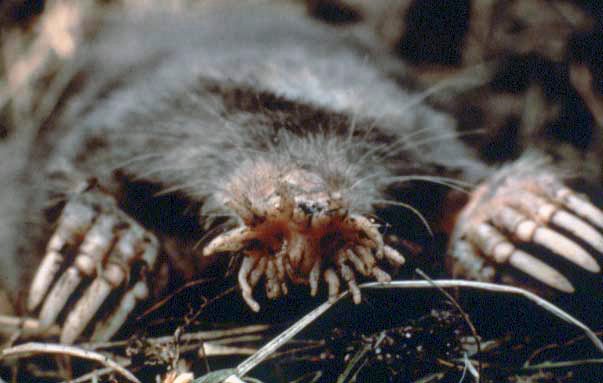 Don’t worry: it has eyes…somewhere.

The exploded-face look on this mole allows it to feel its way underground. There are more than 25,000 sensory organs in that schnoz, and it can wiggle its flesh-tentacles around to navigate and identify food (you’re welcome for not embedding a video of that). Star-nosed moles actually look pretty normal from the side, but you’ve likely only ever see this horrifying angle—it emphasizes their best (or worst?) feature. 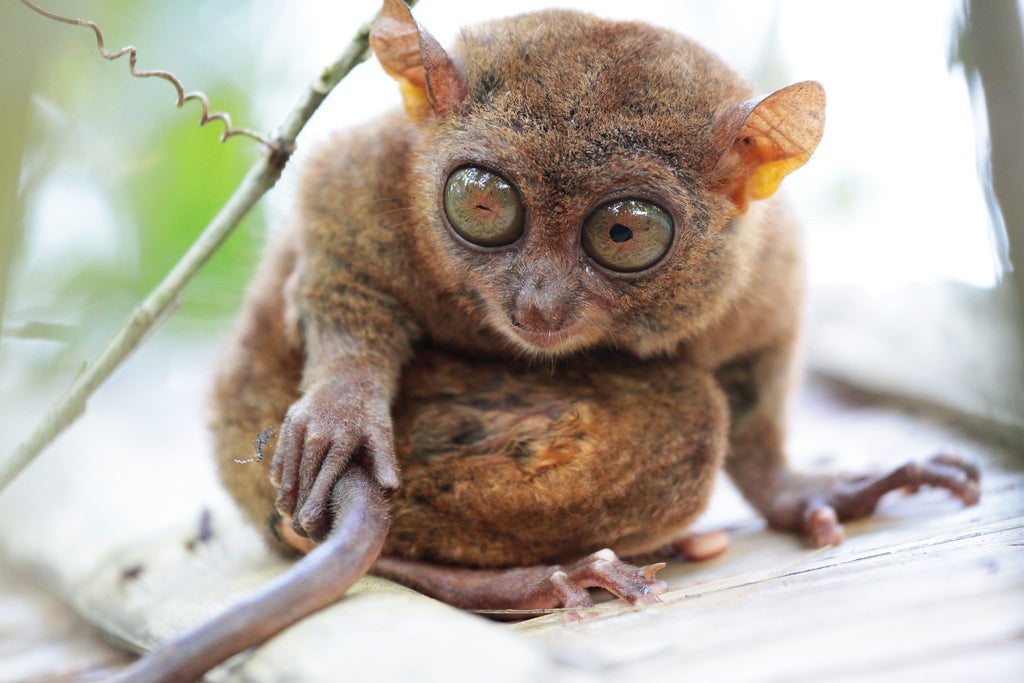 No comment on why the pupils are different sizes…

Those upsettingly large eyes (the ones that seem to be bulging out of its head Play-Doh-style) help the tarsier hunt at night in the Southeastern Asian jungles that it calls home. Each one is as large as the creature’s whole brain, and its head has an unusual structure that allows it to balance out the heavy eyeballs at the front. They also have creepy human-like fingers that help the little scoundrels grip tree branches as they climb.