Some dolphins were even trained to kill. 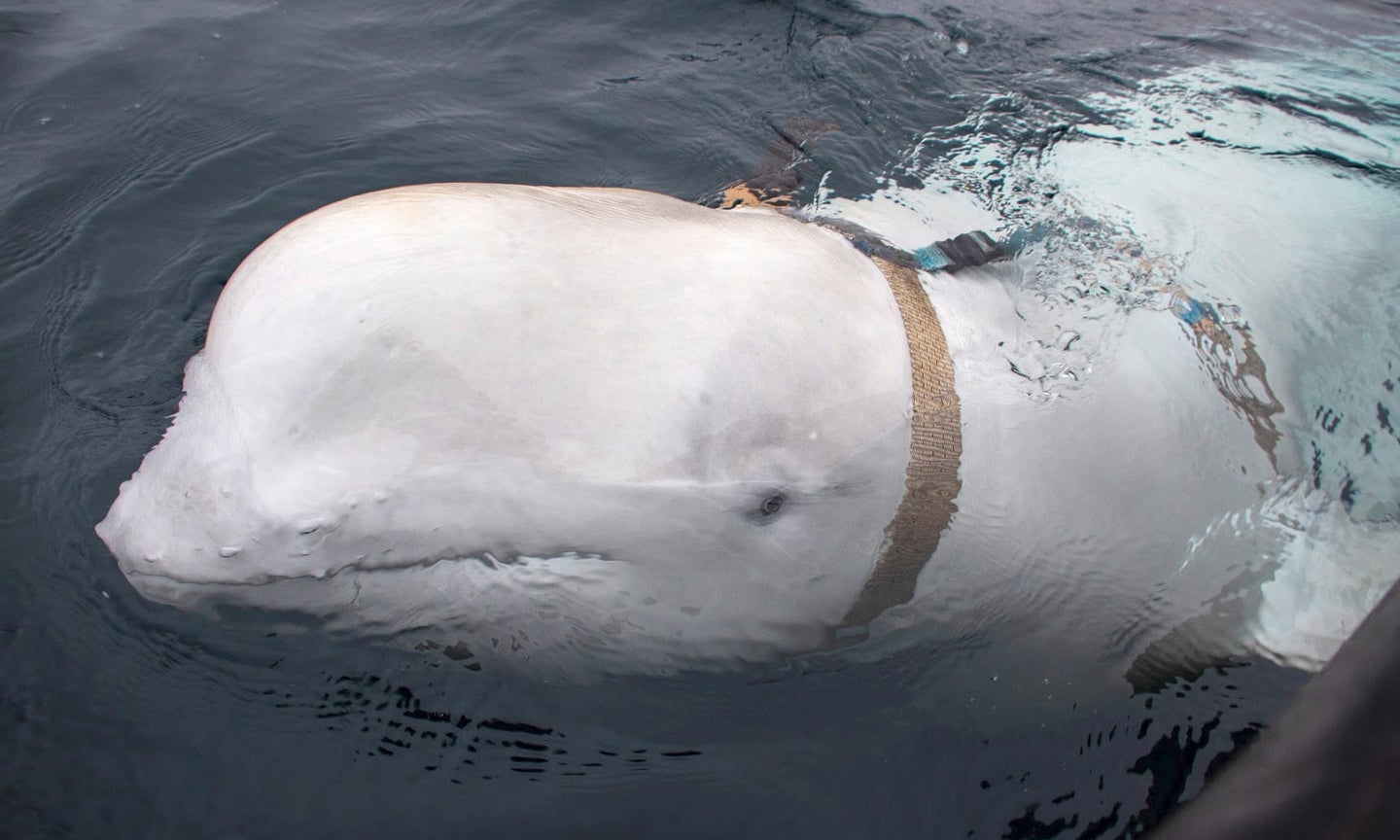 Fisherman off the coast of Norway are presumably accustomed to the strange sights of the subarctic ocean in which they make their living. In Norse mythology, the Kraken lurks just under the surface, waiting to make a meal of unsuspecting seafarers. Mermaids are idolized in art throughout Scandinavia; three bronze fish-ladies are permanently seated at the marina in the small city of Drøbak, Norway. But no citizen was prepared for what approached a fishing vessel last week: An abnormally interactive beluga whale, secured in a harness labeled “Equipment of St. Petersburg.”

The whale has continued its charm offensive throughout Norwegian waters, where it swims around and interacts with any boat it can find. Despite its efforts to endear itself, officials believe the animal, the color of bleached coral and capable of reaching 14 feet and 3,000 pounds, is actually an undercover Russian spy.

The evidence seems convincing. Beluga whales just don’t act like this: they aren’t typically friendly to humans and they most certainly do not wear GoPro cameras. Russian scientists have so far ruled out any academic reason for the beluga’s strange attire, as tags for animals under study are far less conspicuous. While the Russian military denies running an animal espionage program, they have placed ads trying to purchase dolphins for covert operations. And then there’s the fact that history is littered with animal spies, both real and wrongly accused.

Here are some of the most daring undercover critters:

Pigeons get a bad rap, thanks to their rather unsavory city contingent. But homing pigeons have been humankind’s closest confidants and most assured mail carriers for millennia. After all, as the New York Times once wrote, “The first message-bearing pigeon was loosed by Noah.” The Romans, Ghenghis Khan, and Napoleon Bonaparte all followed suit. The birds were regularly maimed or killed on their missions, like Cher Ami, a carrier for the French during World War I who successfully delivered her message—after being shot through the breast and blinded on the battlefield.

Typically, people wrapped their messages directly around the pigeon’s leg or tucked them in little canisters secured to the bird’s appendages. But some have taken this a step further, with varying degrees of success. In 1907, Julius Neubronner first equipped homing pigeons with tiny cameras, which various militaries (most notably the Germans) employed sporadically. During World War II, British officials contemplated strapping incendiary devices to pigeons, making them avian weapons delivery systems, but it appears such technology was never actually developed—at least in pigeons.

Bats are another story. In 1941, a dentist named Lytle Adams landed on the idea of strapping bombs to the leathery flying mammals. His apocalyptic vision? “Think of thousands of fires breaking out simultaneously over a circle of forty miles in diameter for every bomb dropped,” he said, years later. “Japan could have been devastated, yet with small loss of life.”

Lytle was able to get his idea to the National Research Defense Committee, whose members were wholly convinced of the feasibility of this airborne scheme. In March 1943, they began testing Project X-Ray, turning hordes of Mexican free-tailed bats into bombs. They faced some engineering troubles, and set at least one building and one car on fire. By that December, the project was canceled and a new kind of atomic (and animal-free) weapon was on its way.

In the 1960s, the CIA was hard at work on turning housecats into head-to-tail listening devices. It went like this: a veterinarian would sedate a small feline, cut them open, and insert a microphone into their ear, a radio transmitter into the base of the head, and run a thin wire along the cat’s coat all the way into its tail, which was seen as a nature-made antennae. The hope was that these kitties could casually be deployed to the Kremlin, and pick up Soviet intelligence without notice. But by 1967, like so many pet projects before it, Operation Acoustic Kitty was canceled. Many attribute the abrupt end of the experiment to the fact that, at the outset of a test run in Washington, D.C., the experimental radio cat was hit by a car immediately after its deployment.

The U.S. Navy dolphins are one of the few true success stories in the long and sordid history of animal espionage. Starting in the 1960s, the military has trained bottlenose dolphins to recover lost objects and detect underwater mines. Their innate biosonar skills—a form of aquatic echolocation—reportedly make them perfect for the job. Dolphins aren’t the only species in this program, either. The military also uses California sea lions, which have surprisingly superb vision, to identify suspicious swimmers. As of 2015, the Navy had 85 dolphins and 50 sea lions in its San Diego facility.

Around the same time, the Soviets developed their own military whales and actually trained them to kill. A former dolphin care expert who consulted for the Russians said they didn’t just want dolphins to identify undersea mines, but attach fresh mines to enemy boats. The source also told Wired the dolphins learned to jab needles attached to carbon dioxide cylinders into the arms of test dummies (and, presumably, humans), which would most likely kill anyone on the receiving end.

The modern Russian state seems to be maintaining its swimming spies program in some capacity. In 2017, state television reported that seals, bottlenose dolphins, and, yes, beluga whales were being tested for their espionage skills. According to National Geographic, however, belugas “were dismissed when it became clear they got sick after swimming too long in cold, polar waters.” Hmm.

While you could outfit a real bug with a camera, modern surveillance experts are more interested in making cameras that look like bugs. The idea is for these remote-controlled flies on the wall to inconspicuously gather data, whether that’s as a simple listening device or a full-blown video recorder.

Technology is changing the animal spy game in other ways, too. As uncrewed undersea vehicles (read: submersible drones) improve, they could serve as a more manageable alternative to dolphins, sea lions, or belugas.

Of course, the existence of animal spies has put animal civilian at risk. Legend has it that during the Napoleonic wars, a monkey was hanged on a beach in Hartlepool after a mob convicted it of espionage. More recently, the Iranian government took on a family of squirrels gathered outside a nuclear facility, because some worried the fluffy rodents were actually gathering data for an enemy nation.

Who knows what other secret agents hide among us.