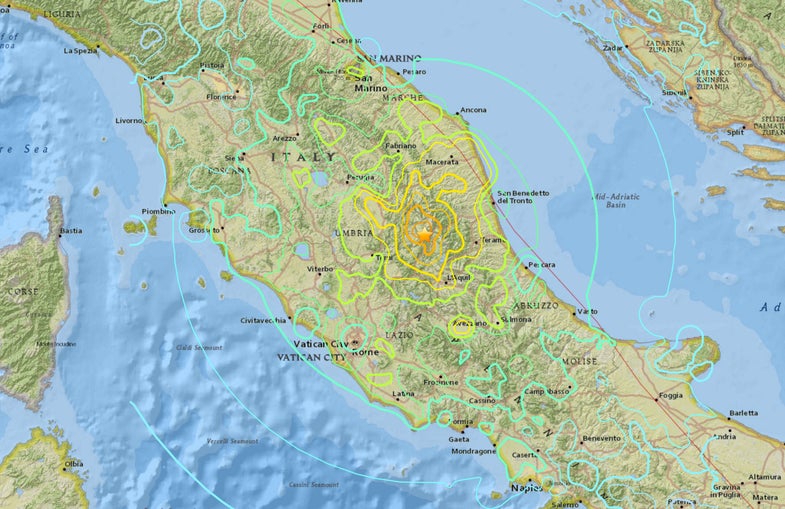 A large earthquake struck central Italy just after 3:30 am local time, when most people in the region were asleep at home.

The magnitude 6.2 earthquake reduced buildings to rubble while people slept inside, devastating small towns scattered throughout the region. Strong aftershocks continued to shake the region as the day went on.

Reports are still coming in, but based on the strong shaking in the region, initial estimates put economic losses due to earthquake damage at somewhere between $1 billion and $10 billion. Though only about 38 people are confirmed to have died, its likely that many more confirmations will roll in as search and rescue work continues. Initial estimates of loss of life say that significant casualties are likely, with the most likely death toll at this time predicted to be between 100 and 1000 people.

“Quakes with this magnitude at this depth in our territory in general create building collapses, which can result in deaths,” the head of Italy’s civil protection service, Fabrizio Curcio told the Associated Press.

The magnitude of the quake was measured at 6.2. The number tells us the relative size of the earthquake on a logarithmic scale, which means that a magnitude 6 earthquake is 10 times larger than a magnitude 5 earthquake. But the placement of an earthquake matters too. A magnitude 7.4 earthquake occurred on August 19 in the South Atlantic, but in an area so remote that no one was affected. Today’s event is vastly more devastating than the larger quake because of the economic damage and loss of life. This earthquake in Italy was still a smaller quake, but because it occurred near several population centers, the damage is more severe.

The damage was made worse by the location of the earthquake within the Earth as well. The fault ruptured a very shallow six miles under the surface of the Earth. Shallow earthquakes tend to cause more intense shaking at the surface than deeper earthquakes. The focus, or center of this earthquake happened on a fault line that geologists call a normal fault, which looks something like this:

To look for the cause of the fault’s movement, head west, to where the Tyrrhenian basin (the geology under the Tyrrhenian Sea) is getting stretched apart as Europe slowly moves north, away from Africa. At the location of the earthquake, Europe is moving away from Africa at a rate of about an inch per year. This extension of the crust is thought to be a driving factor in this particular earthquake.

Italy, with it’s complicated geological setting, has a long history of strong earthquakes across the country, and in this area, the central Apennine region, in particular. The largest earthquake measured in the region was a magnitude 6.7 back in 1915 that killed an estimated 32,000 people. More recently, in 1997, a magnitude 6.0 earthquake shook the area 30 miles to the north-northwest of today’s Earthquake, part of a large series of earthquakes that shook the region for months doing extensive damage to noted historic sites, like the shrine of St. Francis in Assisi.

Then, in 2009, a huge earthquake struck the central Italian town of L’Aquila, 27 miles to the south-southeast of today’s earthquake. That earthquake killed around 295 people, and became notorious in the scientific community, after Italy charged top geoscientists with manslaughter for not anticipating the intensity of the quake.

Though results are preliminary, the USGS says that today’s earthquake appears to fill in a gap between the 1997 and 2009 events.