“The animals are telling us things,” said Martin Wikelski, hopping out of the cockpit of his Cessna. He had just... 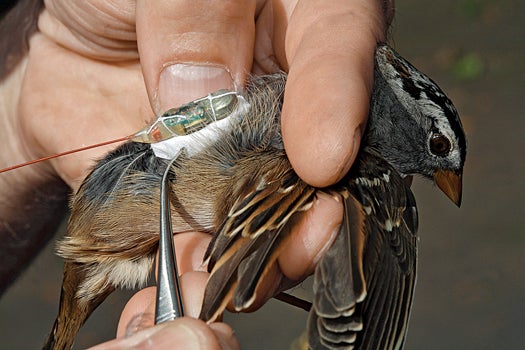 “The animals are telling us things,” said Martin Wikelski, hopping out of the cockpit of his Cessna. He had just spent a chilly January morning chasing blackbirds in southern France. “Maybe they’re saying, ‘the next earthquake will happen this week,’ or ‘listen, we’re telling you where this ebola outbreak is headed. Pay attention.'” The blackbirds hadn’t been quite so explicit today, but by tracking data from radio tags temporarily glued to their backs, he had learned their heart rates and how fast they flap their wings. In a few days Wikelski, the director of the Max Planck institute for Ornithology in Germany, planned to fly across West Africa to track fruit bats. Then he would crisscross Bhutan searching for mountain pheasants. After that, it was moths in the Alps.

Billions of animals are migrating around the planet every second, Wikelski points out, and we have no idea where most of them are going or why. “Fruit bats are the most numerous mammal in Africa,” he says. “They carry ebola. Yet for most of the year, we have no clue where they are. that’s amazing.” For Wikelski, the project to map this dynamic global system, one that has been mostly overlooked until now is no less important than the project to map the human genome. And the potential benefits could extend well beyond conservation. “Could we help African farmers guard against swarms of locusts?” he says. “Sure. We’re talking about something transformational, and it touches everything from public health to climate change.”

Wikelski began his work in the late 1990s, tracking small animals like songbirds. His quest appeared quixotic, he admits. No one had tracked such small species before. Many assumed it couldn’t be done. Working on a shoestring budget, he once mounted a makeshift three-foot-tall antenna on an ’82 Oldsmobile and sped from Illinois to the Canadian border in pursuit of a few dozen thrushes. “I’d show up at people’s homes at 6 a.m. and ask if I could set up mist nets in their backyard. Some people would invite me in
for coffee. Other times I’d hear a shotgun cocking behind the door. I figured i didn’t really need those data points.” 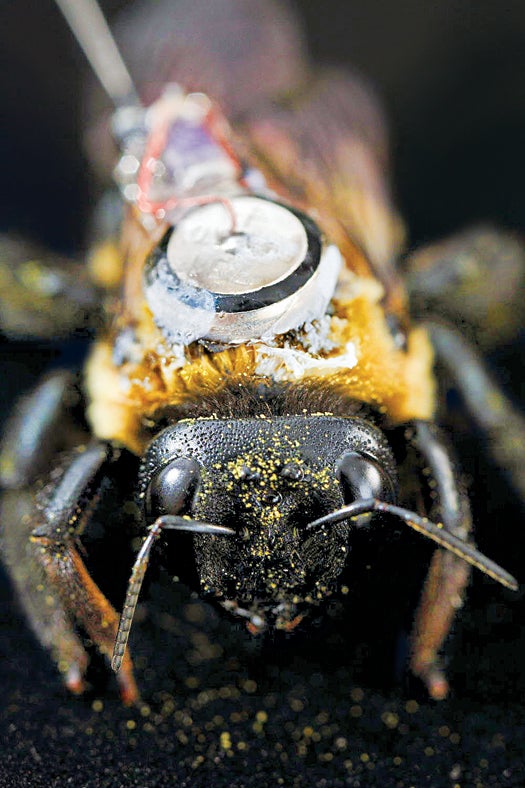 Zoologists say that transmitters worn by airborne animals should weigh less than 1/20 of an individual’s weight, so its behavior isn’t altered.

Wikelski later managed to attach radio tags to insects using a syringe plunger and false-eyelash adhesive. he also became a licensed pilot. He chased dragonflies off the coast of New Jersey, bumblebees across Germany, and monarch butterflies in Kansas. “No one had ever done this before,” he says, “so we learned something new with every migration.” Thrushes use more energy during stopovers than in flight, for example, and brown bats navigate long distances using the earth’s magnetic field, not their famous echolocation skills.

But Wikelski was still unable to track his subjects throughout the year, or across continents and oceans. To do this, he would need to create a global satellite system that could work with very small and extremely lightweight transmitters. His team set about designing a low-orbiting satellite that would hover some 248 miles above earth and thus be capable of receiving a low-frequency signal from tags weighing less than a gram. Before the team could finish that project, though, an even better opportunity presented itself.

Last year, Wikelski received permission to establish a global small-animal tracking system aboard the international space station—which conveniently orbits between 173 and 286 miles above earth. By 2014, when the system goes live, he envisions tracking a few dozen species simultaneously. That would mean
keeping an eye on tens of thousands of highly mobile individuals at any given time, each of which could supply several dozen pieces of information in real time, on everything from location to energy expenditure. If all goes according to plan, it’s hard to see how ICARUS (the International Cooperation for Animal Research Using Space) couldn’t soon begin, say, tracking avian-transmitted infectious diseases. And like GPS, which was created to help U.S. troops orient themselves in the field, ICARUS could outgrow its original mission. Daimler-Chrysler has already invested in sensors to communicate with small objects (such as car keys) aboard to the ISS.

Even after ICARUS takes flight, Wikelski plans to continue climbing into his plane and chasing birds and bees across the sky in search of data. “It’s the brute-force method,” he says. “You tag the animals, then you just have to be crazy enough to stay with them all the time.”