Mammals’ ears may hold the secret to warm-bloodedness

The coiled channels deep within the ears of fossilized and modern animals reveals that mammals became warm-blooded 233 million years ago. 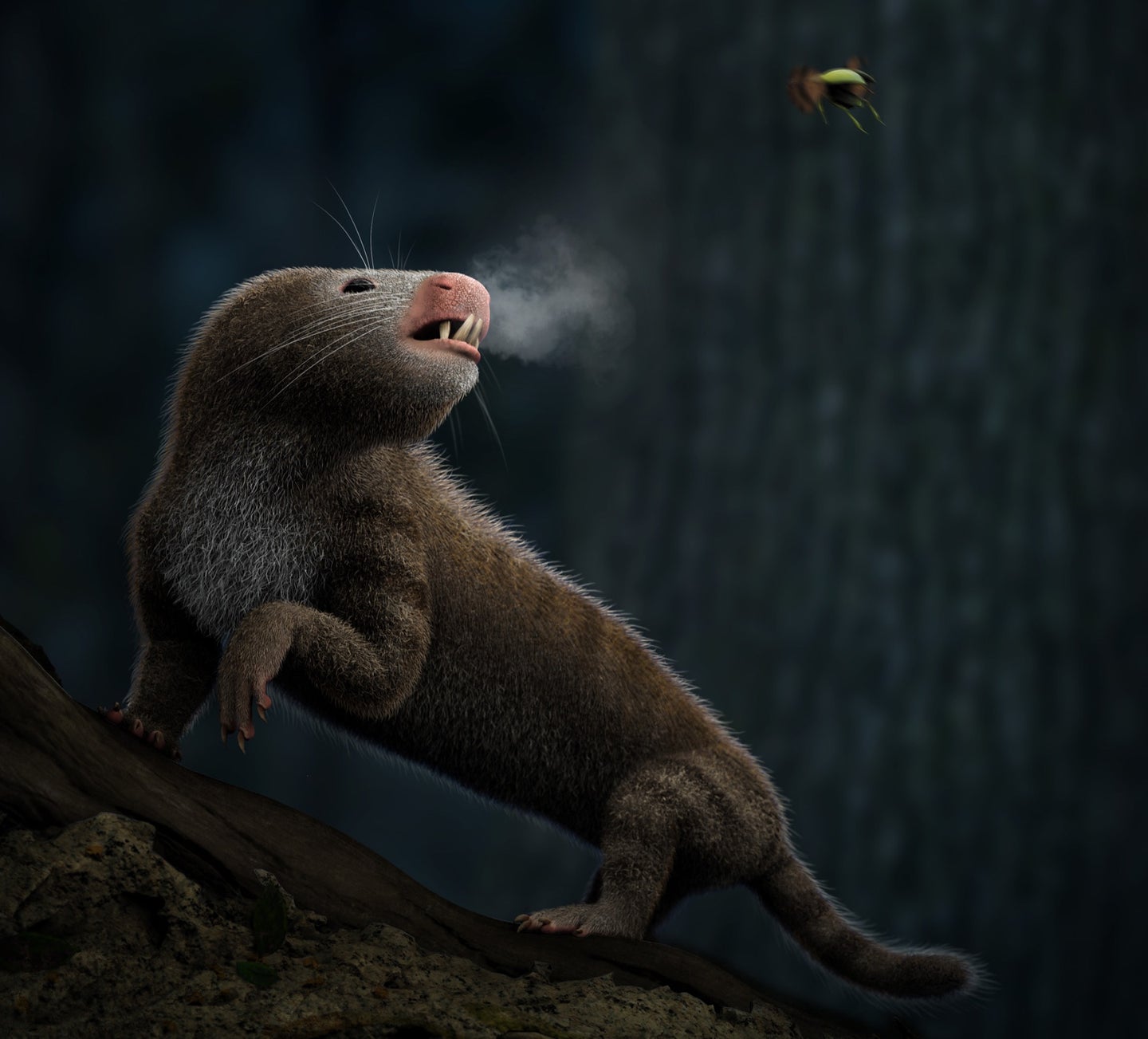 A mammaliamorph breathing out hot hair in a frigid night, hinting at endothermy, or warm-bloodedness. Luzia Soares
SHARE

Today’s mammals and birds enjoy numerous advantages from being able to generate their own body heat. Warm-blooded animals have high metabolic rates that allow them to be more active than creatures that depend on their surroundings for warmth. They can travel faster, undertake long migrations, and inhabit chilly terrain.

Now, a report published today in Nature gives new light to a long-standing puzzle as to when mammals evolved this vital trait. To help pin down the metabolic mystery, the group of paleontologists tapped a surprising piece of anatomy: the inner ear—the shape of which is influenced by an animal’s body temperature. The team examined the inner ears of fossilized and modern species, and estimated that warm-bloodedness, or endothermy, emerged in the group around 233 million years ago during the Late Triassic Period, before the first true mammals evolved.

“When mammals and their ancestors became endothermic has been one of the great unsolved mysteries of paleontology for a really long time; it’s such a distinct feature of mammals and it’s wrapped up in so many aspects of our physiology and biology,” says Kenneth D. Angielczyk, a curator of fossil mammals at the Field Museum of Natural History in Chicago. “We’ve been able to pinpoint when mammal-style endothermy evolved much more precisely and much more accurately than what was possible previously.”

Previous estimates for when endothermy emerged have varied widely and are based on fossil evidence for traits seen in many warm-blooded animals such as rapid growth or nocturnal activity. However, these traits aren’t necessarily “exclusive indicators” of endothermy, Angielczyk says. For example, the ability to maintain a core body temperature could enable an animal to stay active at night, when basking in the sun isn’t an option, but there are also plenty of nocturnal reptiles and amphibians found in hot climates.

“We believe that the specific adaptations to the mammalian inner ear, namely a part of the ear called the semicircular canal system, provides a more conclusive answer,” says Ricardo Araújo, a paleontologist at the University of Lisbon’s Institute of Plasma and Nuclear Fusion in Portugal and another coauthor of the findings.

[Related: Were dinosaurs warm-blooded or cold-blooded? Maybe both.]

The semicircular canals are a series of coiled tubes filled with a liquid that help an animal track the movements and spatial location of its head, which is crucial for navigation, balance, and motor coordination. The fluid in these canals becomes runnier at warmer body temperatures. This means that, in order to maintain regular movement and balance, the semicircular canals of warm-bodied animals need to be a different specific shape and size for that thinner, sloshy liquid than in animals with colder body temperatures and thicker inner ear fluid.

Canals fine-tuned for warm temperatures suggest that their animal owner can create its own internal heat. By looking at the shape and relative size of the inner ear, the researchers say, it’s possible to predict whether an animal was warm- or cold-blooded.

Armed with this information, the research team sought to investigate the origins of endothermy in mammals by  examining CT scans of the inner ears in both fossil and modern skulls. The analysis included 341 species, including 234 modern mammals, reptiles, birds, and amphibians, as well as 64 prehistoric species that included close relatives of early mammals.

The team observed that the most ancient mammalian ancestors had long, thick semicircular canals, resembling those of cold-blooded modern reptiles and amphibians. By contrast, modern warm-blooded mammals had much thinner canals that were smaller relative to their body size.

When the team used these inner ear measurements to calculate the animals’ body temperatures, they found that their estimates for modern species were very similar to published body temperature data. Based on their body temperature estimates for extinct animals, the team concluded that the transition to warm-bloodedness took place over a 1 million year period,  before the first true mammals emerged roughly 200 million years ago. “The tempo of the evolution of endothermy was surprisingly fast, geologically speaking,” Araújo says.

Warm-bloodedness emerged during the Carnian pluvial episode—a period of climatic instability marked by hot temperatures and heavy rains. Being able to maintain a stable body temperature may have helped the ancestors of mammals cope with the upheavals in their environment, Angielczyk says.

The study authors suspect that the emergence of endothermy in mammals is tied to genetic changes that resulted in a physiological process that allowed the animal to become “a factory that’s continuously pumping heat,” and the evolution of fur for keeping that precious heat from dissipating into the surrounding air, explains Araújo.

[Related: The secret to these bats’ hunting prowess is deep within their ears]

The new technique is more accurate for assessing groups of animals than predicting body temperature in individual species. Definitively identifying specific species that were cold- or warm-blooded would give an even more precise timeline, Angielczyk acknowledges. For future research, he and his team plan to extend their technique to more extinct creatures. “It will be interesting to do more sampling, particularly around the origin of mammals,” Angielczyk says, and “to apply this approach to other animals in the fossil record.”

Roger Seymour, an evolutionary physiologist at the University of Adelaide in Australia who wasn’t involved in the research, says that scientists have debated how mammals became warm-blooded for at least 60 years. The new results could help move the conversation forward.

“The amount of work involved in getting the data and analyzing it is enormous,” Seymour said in an email. “The data set is very valuable.”

Seymour and his team have previously proposed that high metabolic rates developed even in the shared ancestor of birds and mammals nearly 300 million years ago. More evidence will be needed, he said, to demonstrate that the anatomical changes in the semicircular canals reported in the new paper coincided with the advent of full-blown endothermy, rather than occurring afterwards.

Linking the inner ear structure to endothermy was “an eyeopener,” says Seymour. “This paper is definitely a new approach to the question of the origin of endothermy in the mammal lineage.”