A look at the spacecraft's first year studying the Martian atmosphere 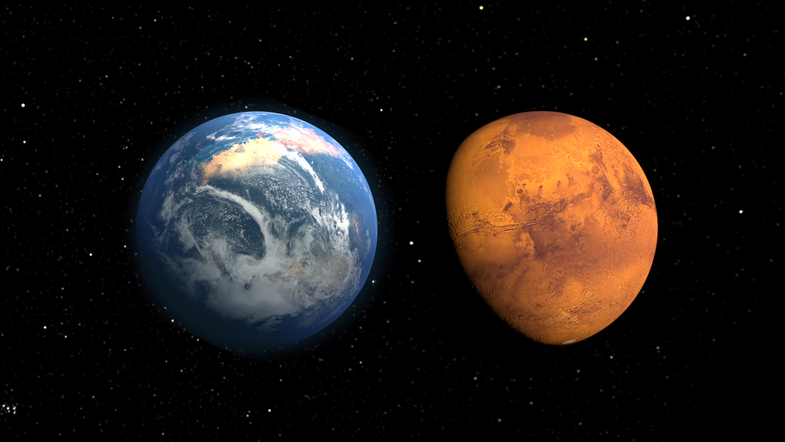 This artist’s conception compares how Mars might have looked as a wetter, warmer planet (left) than it does today (right). With an average surface temperature of -67°F, the Red Planet is much too cold for us Earthlings today. However, scientists believe Mars was once warm enough to hold liquid water. The data MAVEN collects will tell scientists about Mars’ climate history and help them assess the feasibility of life on Mars. NASA's Goddard Space Flight Center
SHARE

Today marks one year since NASA’s Mars Atmosphere and Volatile Evolution (MAVEN) mission entered orbit around our planetary neighbor. The goal of the $671 million mission is to investigate the planet’s upper atmosphere in hopes that it may hold clues about how Mars transitioned from a wet world with a thick atmosphere to a desert world with a thin one.

Launched on November 18, 2013, the spacecraft traveled for about ten months, over more than 400 million miles, before it reached the Red Planet on September 21, 2014. Since then, MAVEN has circled for a full year, including among its accomplishments the first up-close observation of a comet flying by Mars, and four deep-dip campaigns in which it descended to collect information from the lower, denser portions of the Martian upper atmosphere.

A year later, here are some highlights from MAVEN’s mission so far. 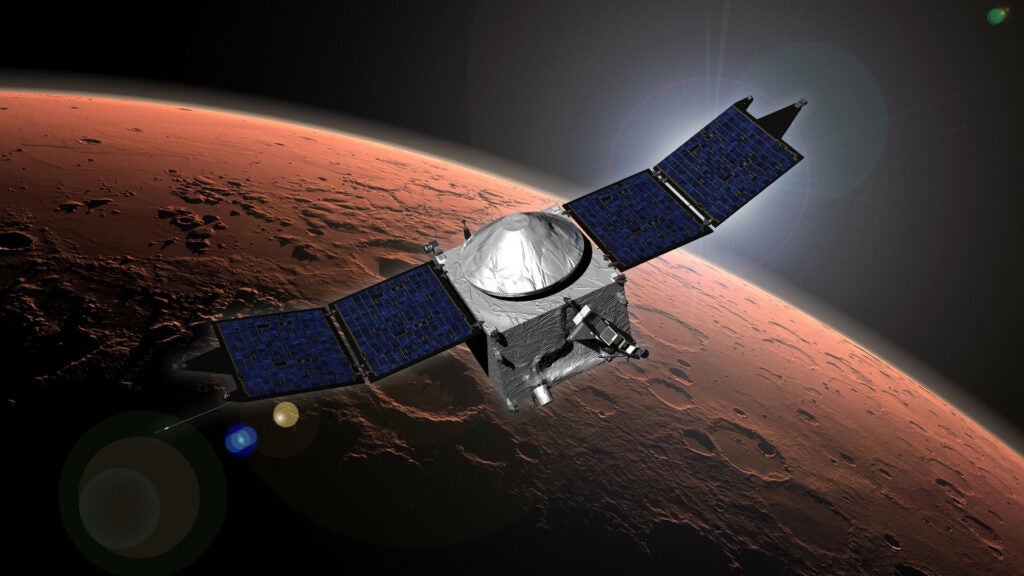 The MAVEN spacecraft, here depicted in an artist’s conception, was built by aerospace company Lockheed Martin. About the length of a school bus, the spacecraft is solar-powered and equipped with an antenna to communicate with Earth. MAVEN is the first mission dedicated to exploring Mars’s upper atmosphere. 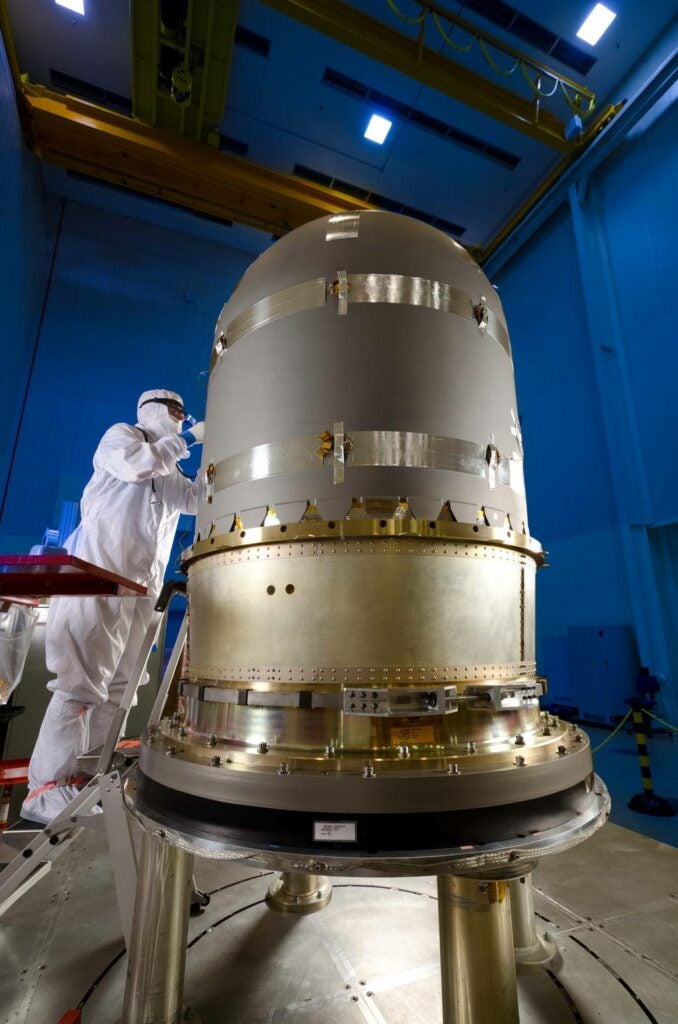 This image was taken in April 2012 as engineers at Lockheed Martin worked on getting MAVEN Mars-ready. Here a worker is preparing MAVEN’s propellant tank before it was installed in the core structure of the spacecraft. 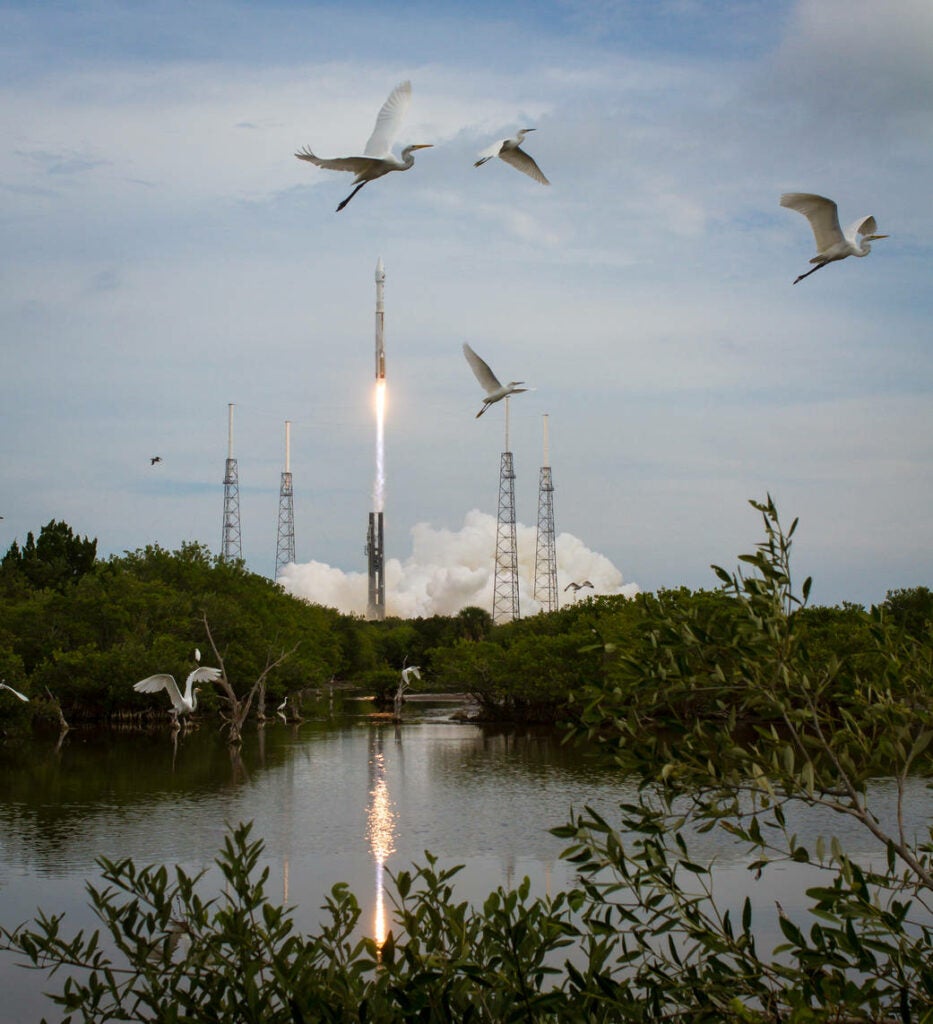 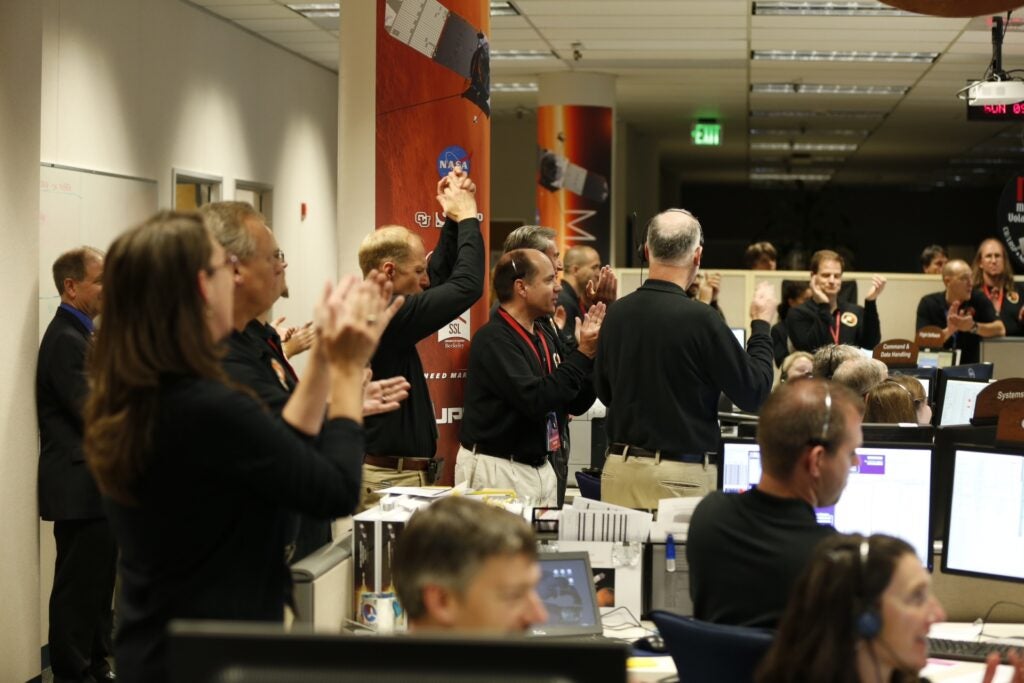 Members of the MAVEN team cheer at the Lockheed Martin operations center in Littleton, Colorado, as the spacecraft successfully entered orbit around Mars on the night of September 21, 2014, after ten months of travel. MAVEN orbits around Mars in an ellipse, flying 93 miles above the planet’s surface at its closest point in orbit, and more than 3,728 miles at its farthest. 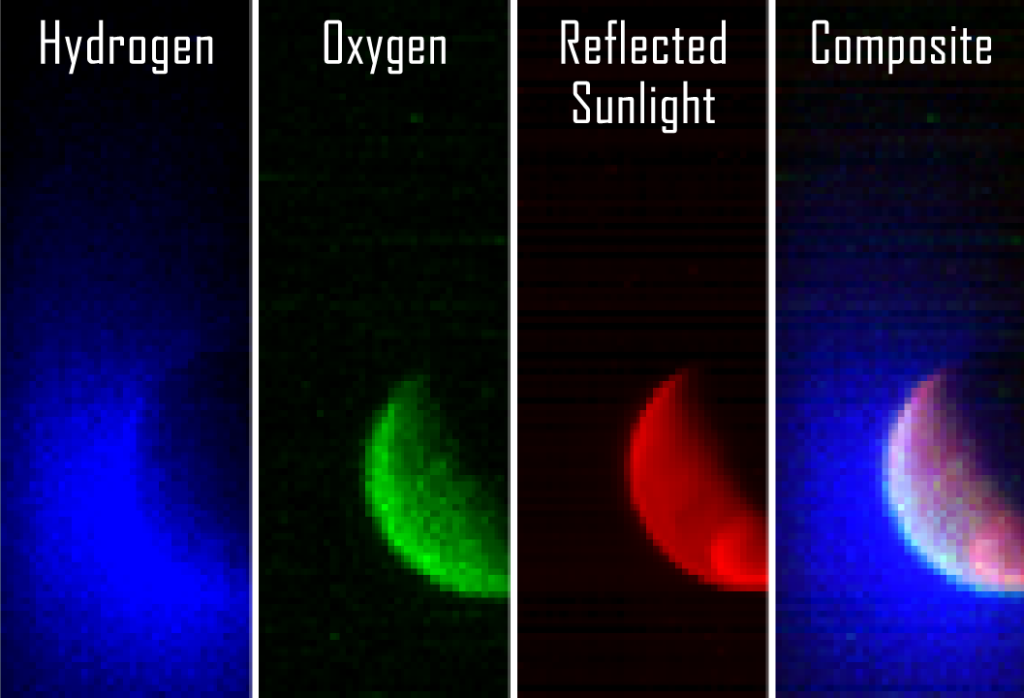 These are MAVEN’s first observations of the extended upper atmosphere around Mars, captured just eight hours after the spacecraft successfully entered orbit. The image captures how sunlight scatters from the planet at various wavelengths, with blue depicting how sunlight reflects off hydrogen gas in the upper atmosphere, green depicting how light reflects off oxygen gas closer to the planet’s surface, and red showing how light bounces off the planet’s surface. Understanding how hydrogen and oxygen escape from Mars’ atmosphere will help scientists determine how much water the planet has lost over time. 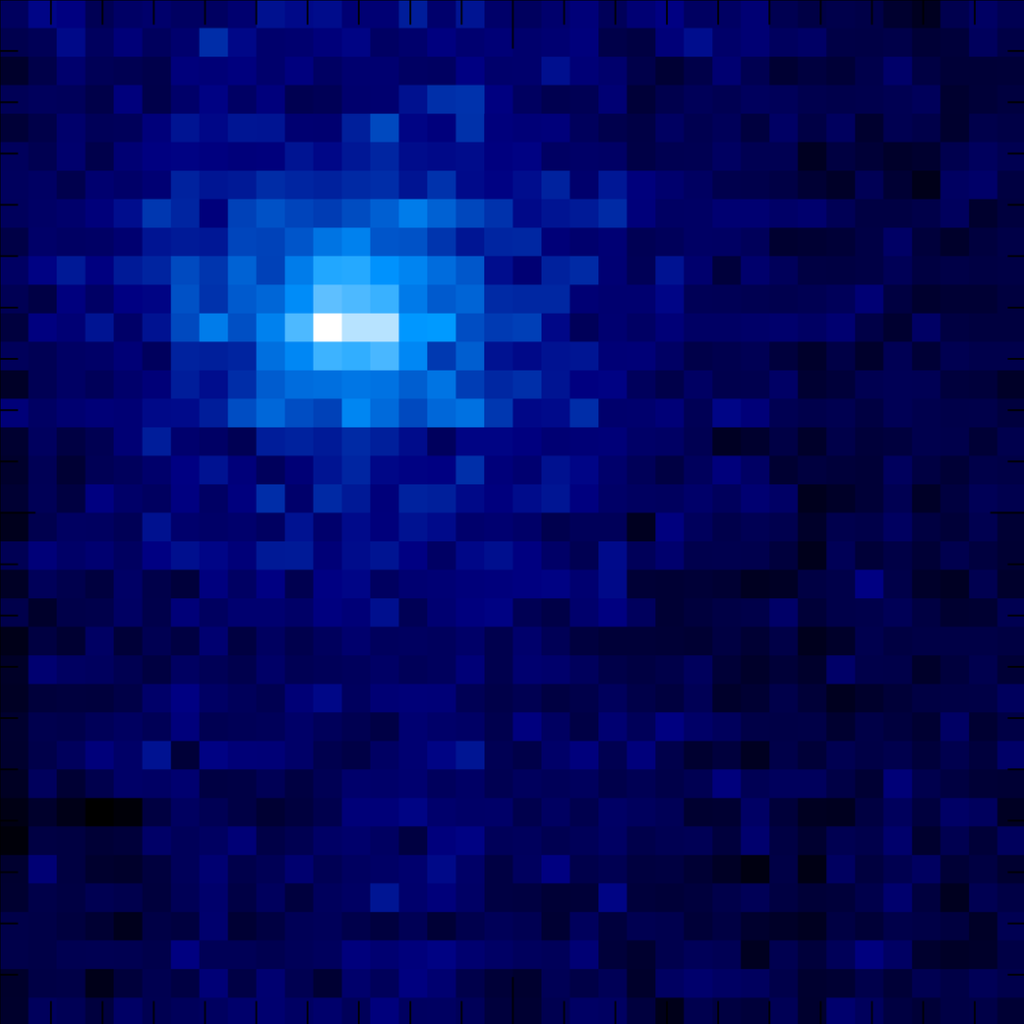 Close Encounters With a Comet

In October 2014, a comet called Siding Spring flew by Mars at about 125,000 miles per hour, coming within 90,000 miles of the planet and endangering MAVEN with its trail of high-speed dust particles. MAVEN managed to avoid harm, and even captured data from Siding Spring, including this ultraviolet image of hydrogen surrounding the comet. 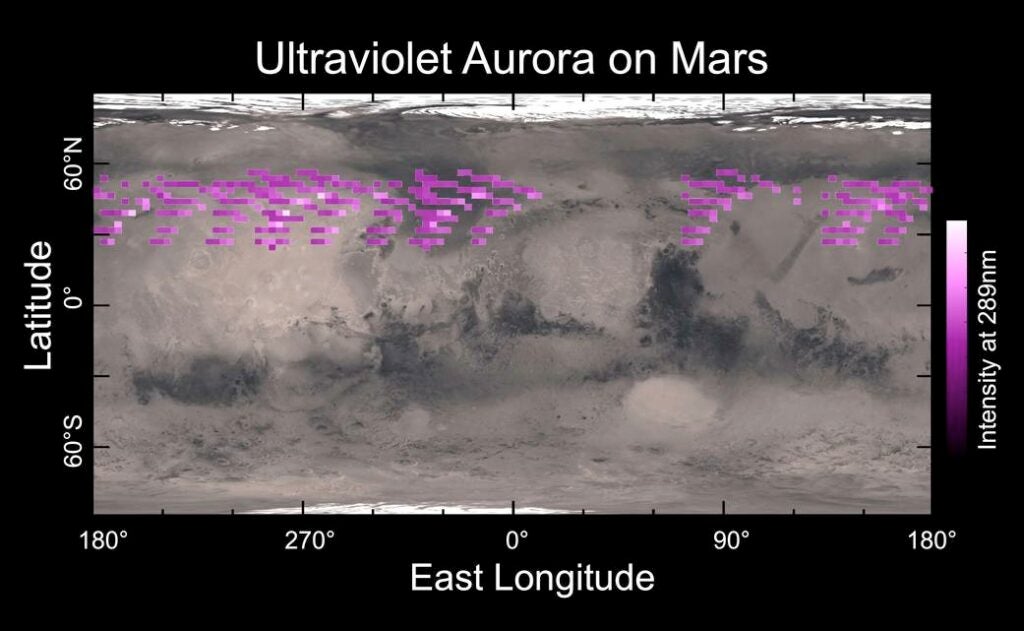 For several days in late December of 2014, MAVEN detected auroras spread across Mars’ northern hemisphere, producing light displays similar to Earth’s northern lights. MAVEN researchers, who dubbed the auroras “Christmas lights,” reported that the auroras circled the planet and descended to Mars’ equator, approaching latitudes analogous to those of Florida and Texas on Earth. In September 2015, MAVEN completed the fourth of five deep-dip campaigns, a series of five-day campaigns during which the spacecraft travels to lower, denser parts of Mars’ upper atmosphere. The goal of these dips are to help scientists get a fuller profile of the Martian atmosphere. During its fourth deep-dive campaign, MAVEN descended to 75 miles above Mars’ surface, where the atmospheric density was about 30 times greater than the density 95 miles above the planet’s surface, the height MAVEN returned to after its maneuver. 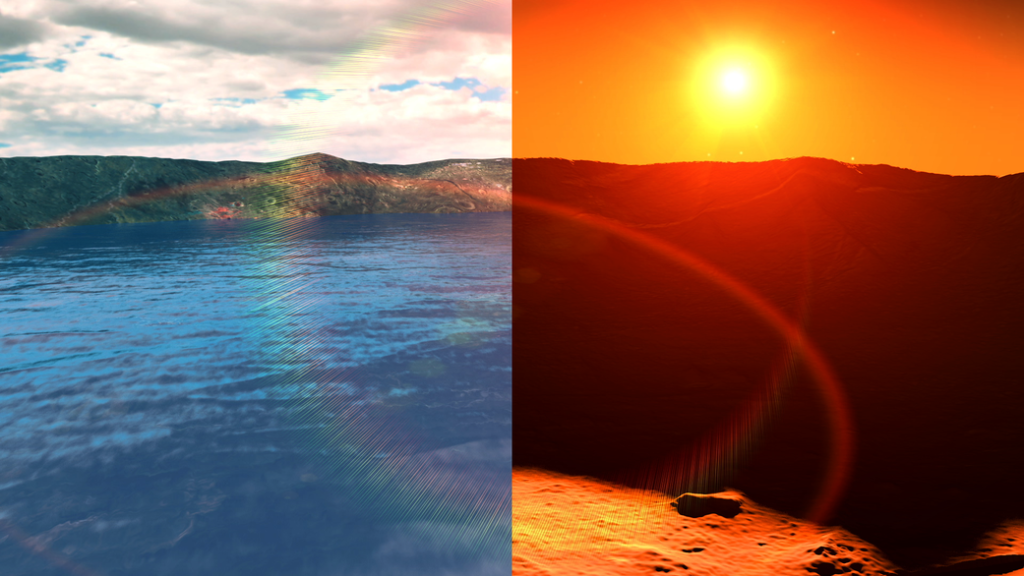 A Portrait of Mars as a Young Planet

The image on the left is an artist’s conception of what an early Martian environment containing liquid water and a thick atmosphere might have looked like. It’s juxtaposed with Mars today (right), which is dry and barren, and has a depleted atmosphere. MAVEN is collecting data that can help researchers understand how Mars lost most of its atmosphere. 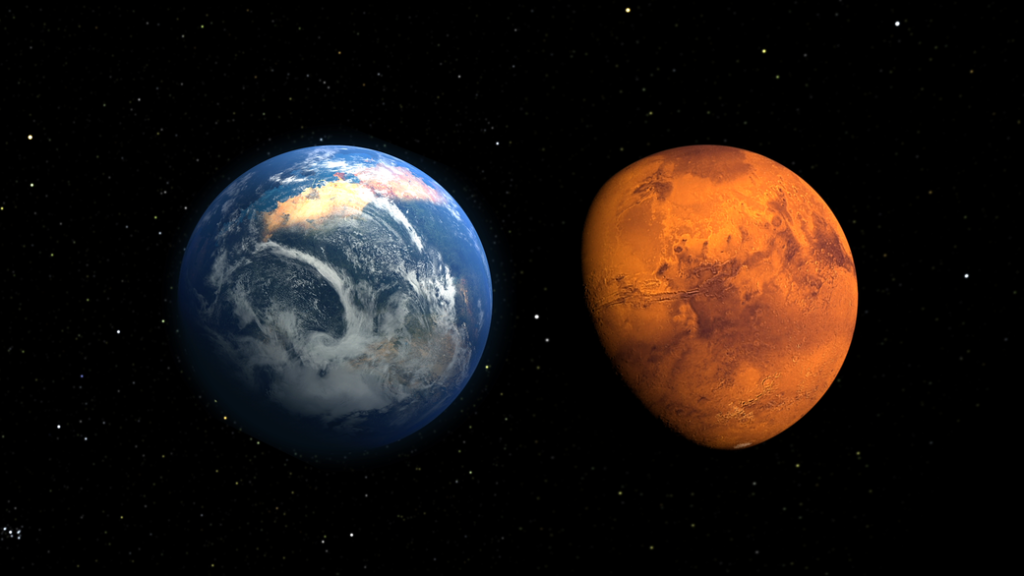 This artist’s conception compares how Mars might have looked as a wetter, warmer planet (left) than it does today (right). With an average surface temperature of -67°F, the Red Planet is much too cold for us Earthlings today. However, scientists believe Mars was once warm enough to hold liquid water. The data MAVEN collects will tell scientists about Mars’ climate history and help them assess the feasibility of life on Mars.
astronomy
auroras
cape canaveral
climate
goddard space flight center