The Greatest Space Hack Ever In NASA’s 56 years of operation, it has put men on the moon and robots on Mars. But one of its greatest achievements is less well known: the hack that saved the lives of three stranded astronauts in 1970.

When an oxygen tank exploded as Apollo 13 neared the moon, the three-man crew had to abort their mission, power down the command module, and move into the lunar module for the journey home. Designed to house only two people, the craft quickly filled with dangerous levels of carbon dioxide.

To save themselves, the astronauts had to somehow attach a square CO2 scrubber to the circular opening of the lunar module’s filtration system. The ground team designed an adapter from the limited items on board, including hoses from spacesuits, tube socks, and duct tape.

Astronaut Ken Mattingly was supposed to fly on Apollo 13, but he was bumped from the mission after being exposed to German measles. So when disaster struck, Mattingly was on the ground. From there, he assisted with NASA’s rescue efforts, and after the Apollo 13 astronauts moved from the Command/Service Module (CSM) to the Lunar Module (LM), he helped them hack an air filter to fit their new quarters. (The CSM breaks down into two other separate modules: the Command Module (CM) and the Service Module (SM).)

Mattingly gave Popular Science an in-depth account of the ordeal.

Popular Science: How did the air filtration system work?

Ken Mattingly: In any spacecraft—at least the ones that carry humans—control of the atmosphere is a major design consideration. In both the CSM and the LM, the atmosphere flows through a little canister with a filter that is filled with lithium hydroxide. The lithium hydroxide will absorb CO2. The filter is just to absorb odors and trap dust, so it doesn’t clog up some of the small valves that are regulating flow.

PS: How did the system in the Command/Service Module differ from that in the Lunar Module?

Designed to house only two people, the craft quickly filled with dangerous levels of carbon dioxide.

PS: After the tank blew, why did the astronauts have to move into the Lunar Module?

KM: When the oxygen was rapidly depleting, that meant two things to the CSM. First, it was going to lose electrical power. When you run out of oxygen your fuel cells quit, as does your life support and pressurization. The CSM also has two small batteries, but you need them to run the Command Module from the time you separate from the Service Module until you get down on the ground. So we were very, very concerned about doing anything that would tap into the batteries. We said, “Okay, we’re gonna stuff these kids in the Lunar Module and live off the LM.” The LM has all batteries, no fuel cells.

PS: When did the situation in the Lunar Module become a crisis too?

KM: About the time we went around the Moon, the LM started getting the high CO2 light. And they changed out the [air filtration] canister. People started saying, “Hmm, you know, we’re going to run out of canisters here in a hurry. What alternatives do we have?” Well, we have this stack of lithium hydroxide in the CSM, but it doesn’t fit in the container [of the LM]. So what can you do? 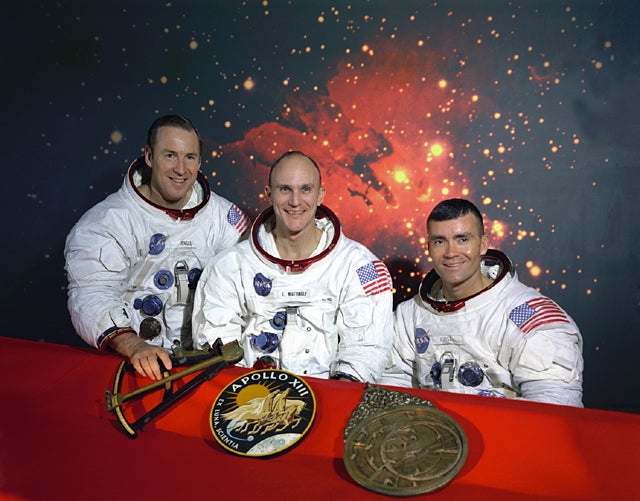 PS: Where the astronauts ready for this type of problem?

KM: As part of our preparation for these missions, the simulation supervisors injected various anomalies and situations we weren’t planning for [into the flight plan exercises] to test the contingency and emergency procedures we had developed.

On an early mission—it could have been Apollo 10 or Apollo 9—they created a situation where they had contaminated the atmosphere in the CM, and they had to figure out how to get it out of there. They said, “Well, why don’t we move into the LM? And we’ll close up and depressurize the CM, get rid of all the cabin atmosphere, then repressurize it, open up the LM, and bring the crew back?”

PS: So how did the team deal with the incompatibility between the CSM canisters and the LM filtration system?

KM: Well, everybody thought the simulation was really a way-out problem. No one could think of any rational way you could get into that situation. But as soon as this [happened to] Apollo 13, somebody said, “You remember the LM lifeboat?” And that jogged everyone’s memory and they said, “Oh yeah!”

“The beauty in this whole thing was, these guys were so prepared for even the most implausible things.”

So how did we do it in that simulation? We cut open some plastic bags that we packaged stuff in and, using just plain old gray duct tape, taped a bag around the canister. Then we inserted it in the suit hose and taped it to one of the nozzles on each end, so you could blow the air through it. It would take some time to run it, but it would run just like if you put it in the manifold itself. We did the same thing [for Apollo 13].

PS: It sounds like it was a fairly calm situation on the ground. Is that really how it was?

KM: The beauty in this whole thing was, these guys were so prepared for even the most implausible things. They knew no one had ever simulated exactly what happened, but they had simulated the kind of stress that could be applied to the system and the people in it. They knew what their options were, and had some ideas already in place about where to go.

In the movie, they played it like nobody ever thought of this. They dumped a bunch of junk on the table and said, “Can you figure it out?” That was the only way the movie could convey how we got there. [In reality,] there was total familiarity with the hardware.

The secret to duct tape’s versatility, whether in a spacecraft or an Earth-bound garage, lies in its fabric layer. Sandwiched between a flexible polyethylene coating and a sticky rubber adhesive, cotton mesh augments the tape’s tensile strength like steel rebar reinforces concrete. Horizontal and vertical threads, meanwhile, make it easy to tear by hand.

This article was originally published in the October 2014 issue of Popular Science. It has been expanded in this web version.