These Apollo pictures show the crowded life of lunar astronauts

Note: This story, published in 2015, is being re-promoted as part of our #sputnik60 celebration of the planet’s first artificial... 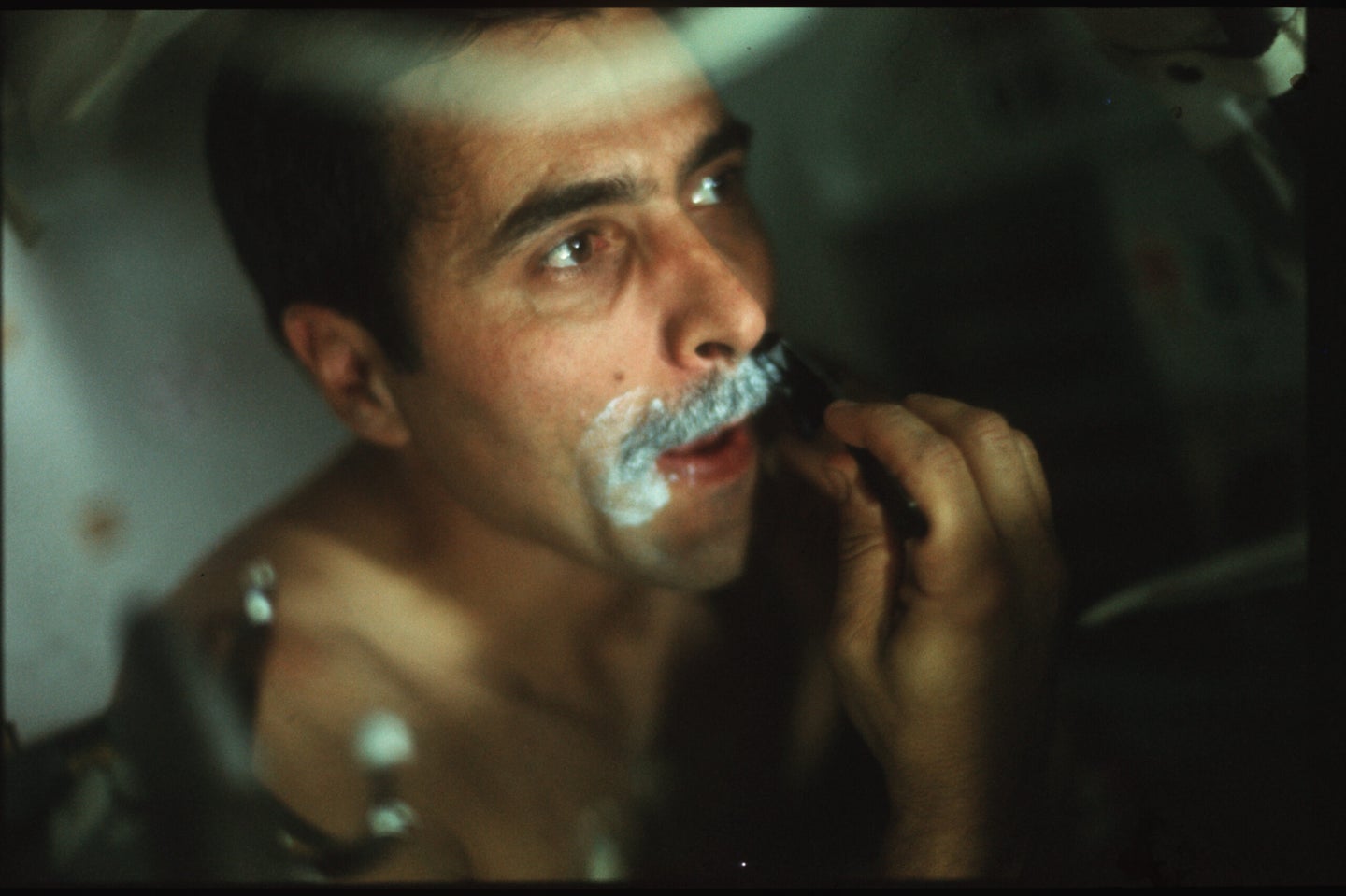 Note: This story, published in 2015, is being re-promoted as part of our #sputnik60 celebration of the planet’s first artificial satellites, Sputnik 1 and 2. For the month of October 2017, we will be resurfacing cool stories about the Space Race.

The Apollo spacecraft came in two livable parts, but they were small. The command module was the gumdrop-shaped vehicle that was the crew’s main living quarters. 10 feet 7 inches from base to apex and 12 feet 10 inches around at the base, the 210 cubic feet of livable space was crammed with three couches and all the instrumentation and display panels the crew would need to manage the entire lunar mission. This was the vehicle the astronauts launched in and the one fitted with a heat shield that would keep them safe during their fiery return through the Earth’s atmosphere. It was their home away from home in space.

The only thing the command module couldn’t do was land on the Moon; that was the job of the dedicated lunar module. And it was even smaller. It gave two astronauts just 160 cubic feet of livable space for up to three days on the Moon, which was the length of Apollo 17’s stay.

Sophisticated as the spacecraft were, the living conditions were spartan to say the least. And the difficultly and occasional awkwardness is brilliantly captured in the small hangful of Hasselblad images the astronauts took of one another in space. They’re scattered in the full magazines, which have recently been rereleased in a series of high resolution galleries on Flickr.

A couple of additional links, since a great article popped up from Robert Pearlman on Collect Space since I posted this gallery. Robert has the story behind the Flickr archive, which is the story of Kipp Teague’s labour of love: http://www.collectspace.com/news/news-100815a-apollo-moon-photos-flickr.html/. The Project Apollo Archive (http://www.apolloarchive.com/apollo_gallery.html/) is another of Teague’s and it’s been my favourite browsing place/site to sift through with coffee all the time page for ages. And it’s worth mentioning that a lot of these images — because they aren’t new and unseen! — are beautifully contextualized in the Apollo Lunar Surface Journal (http://history.nasa.gov/alsj/main.html/) and the Apollo Flight Journal (http://history.nasa.gov/afj/) projects. (edited October 9, 2015) 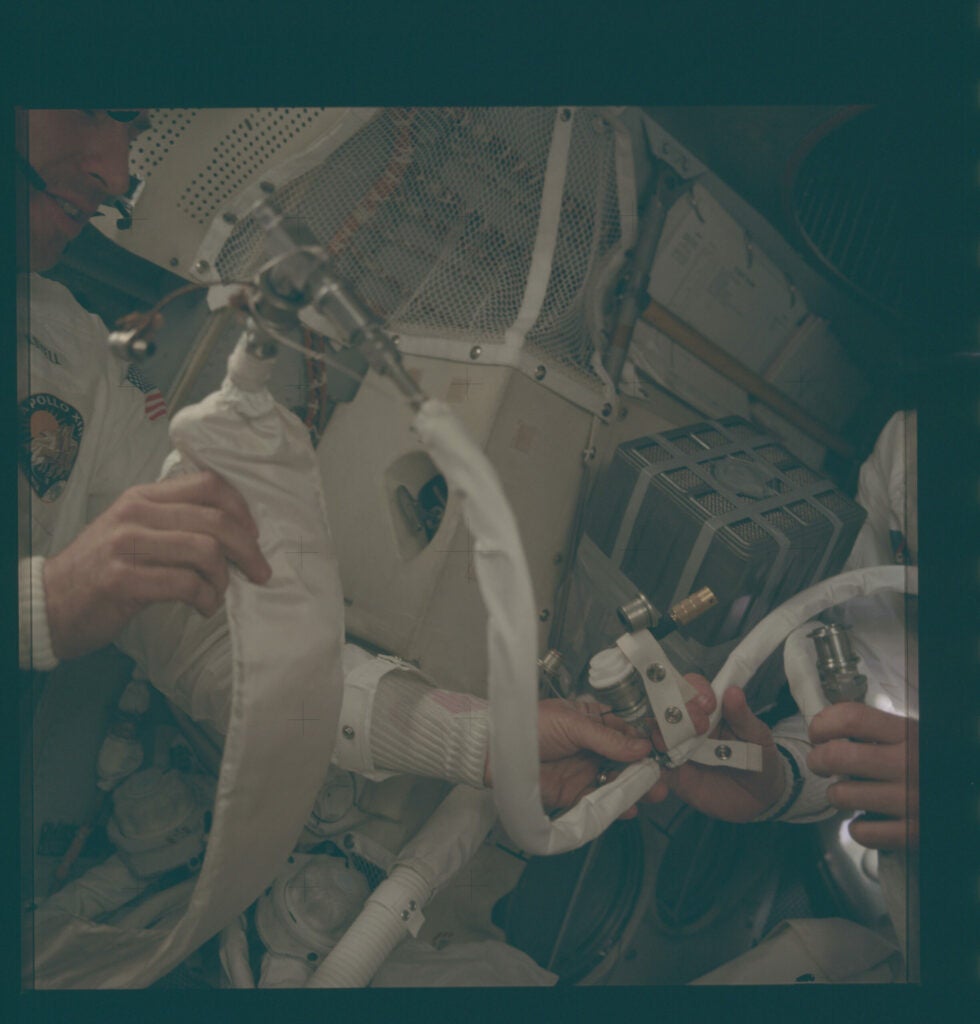 Square Peg in a Round Hole

Apollo 13 Commander Jim Lovell on the left and Command Module Pilot Jack Swigert (not totally pictured) assemble the makeshift carbon dioxide filter on their lunar mission, the one marked by the exploding oxygen tank. April, 1970. 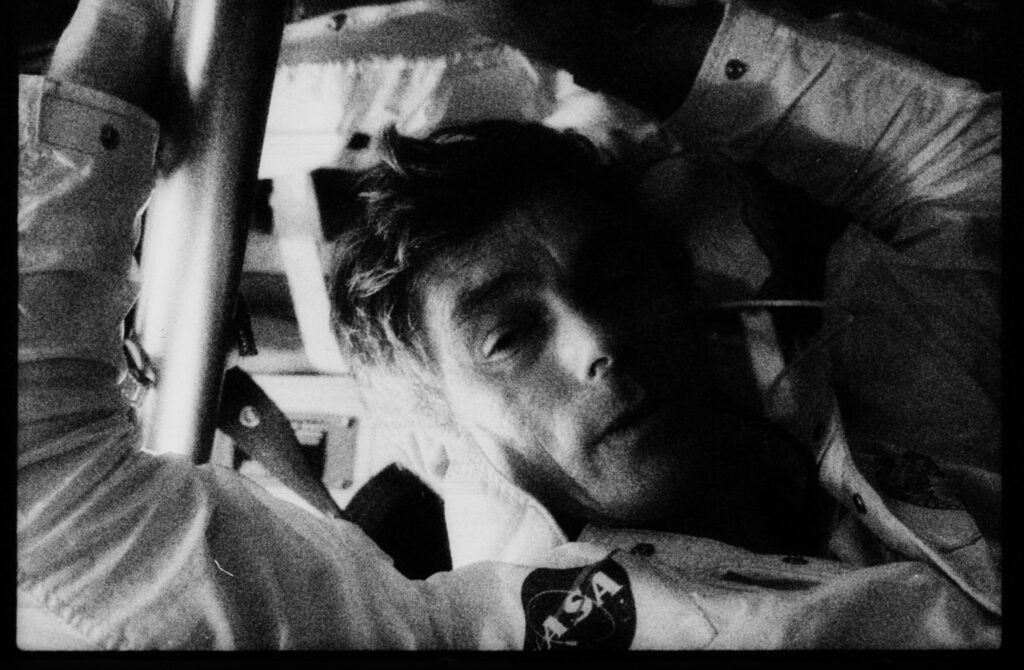 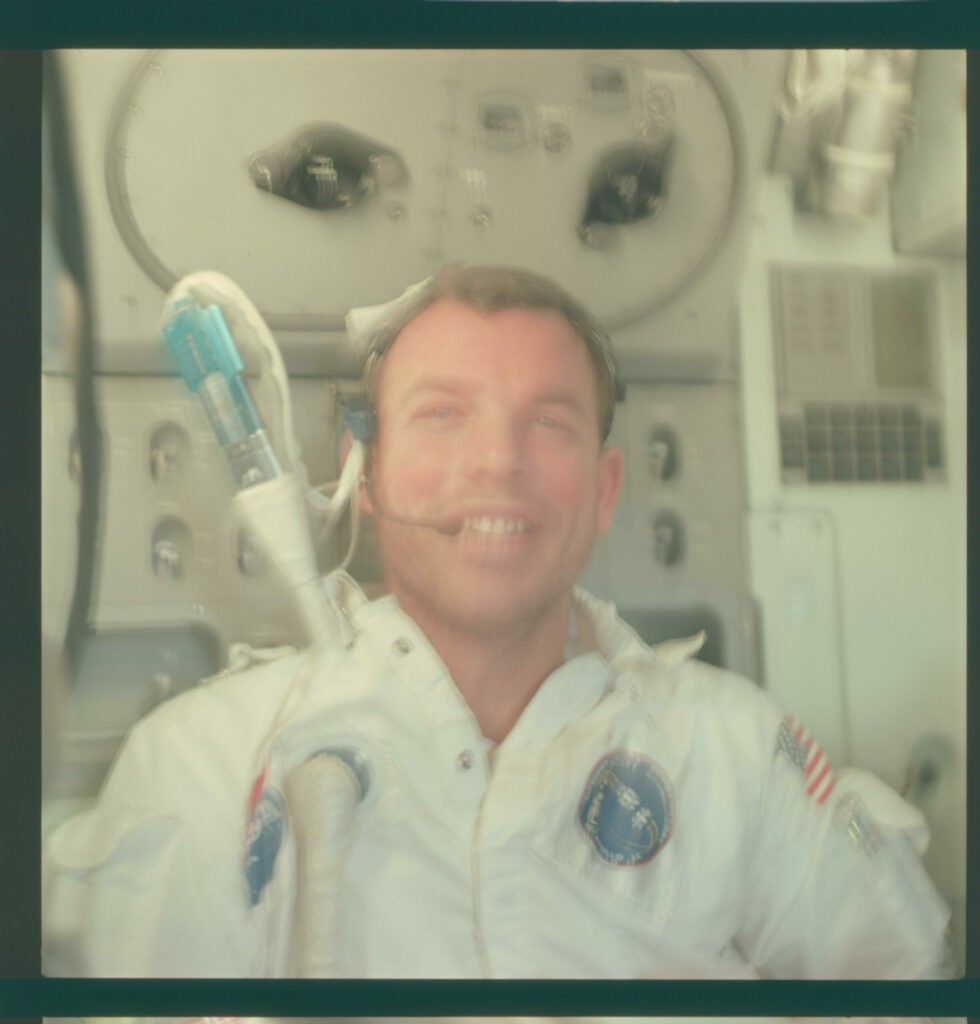 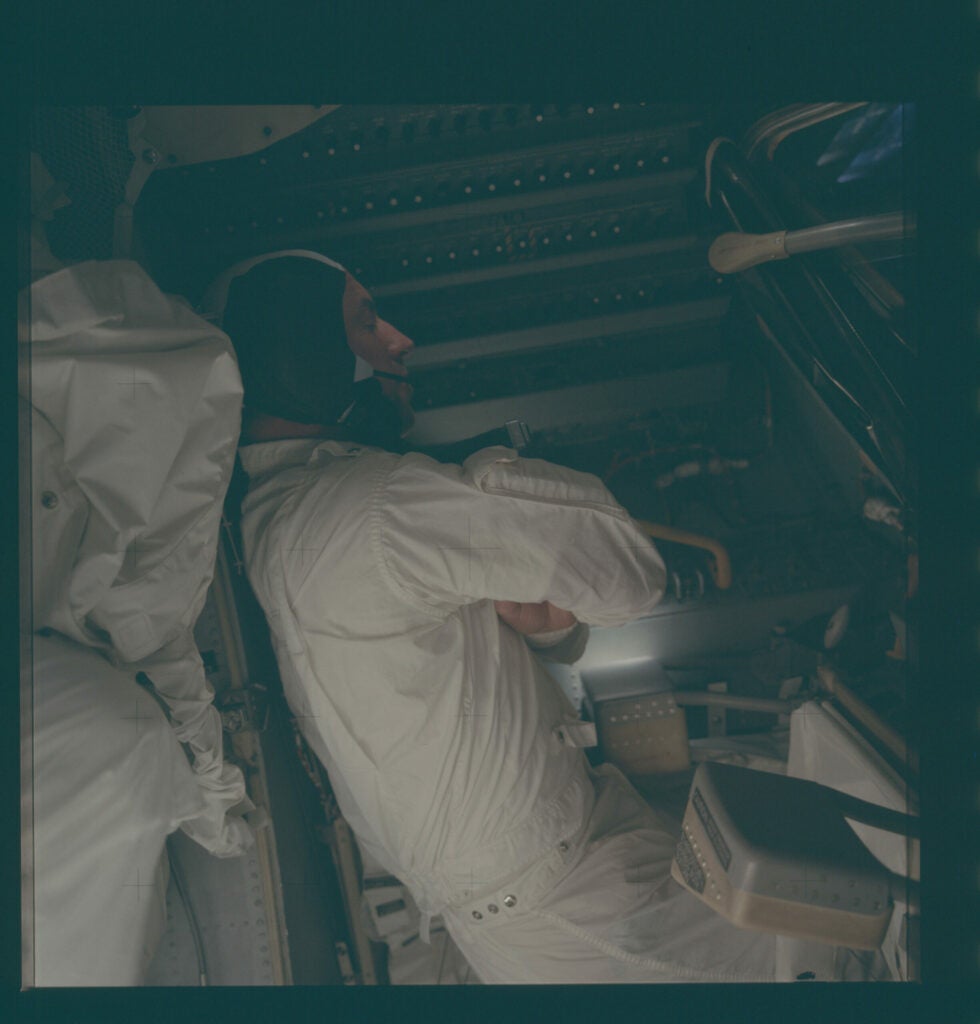 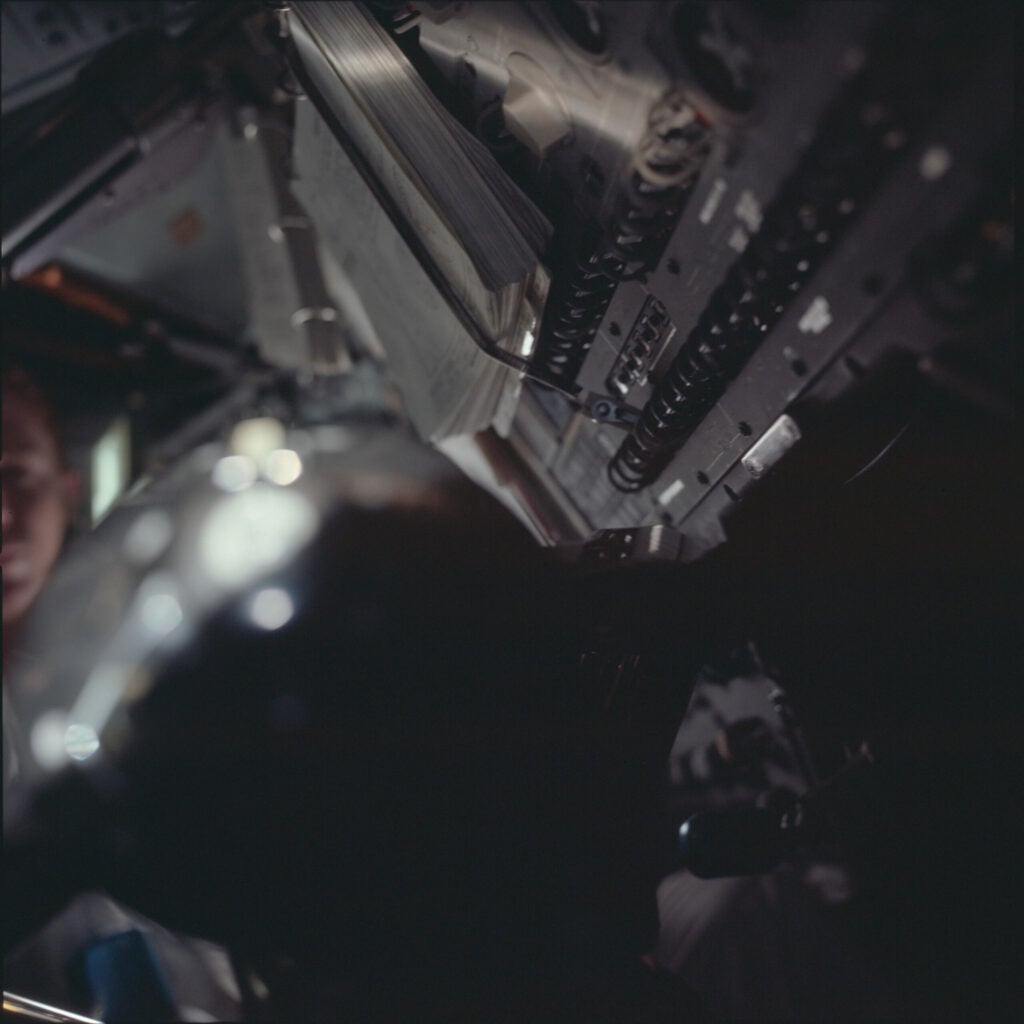 An Apollo 14 astronaut is half seen in this fuzzy shot of the command module. February, 1971. 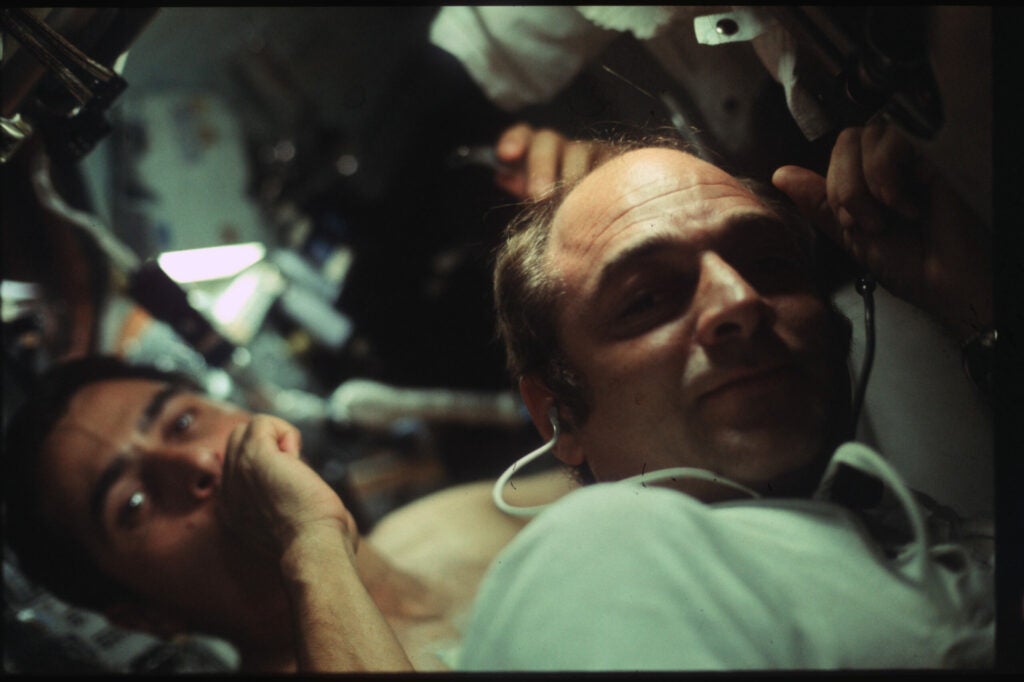 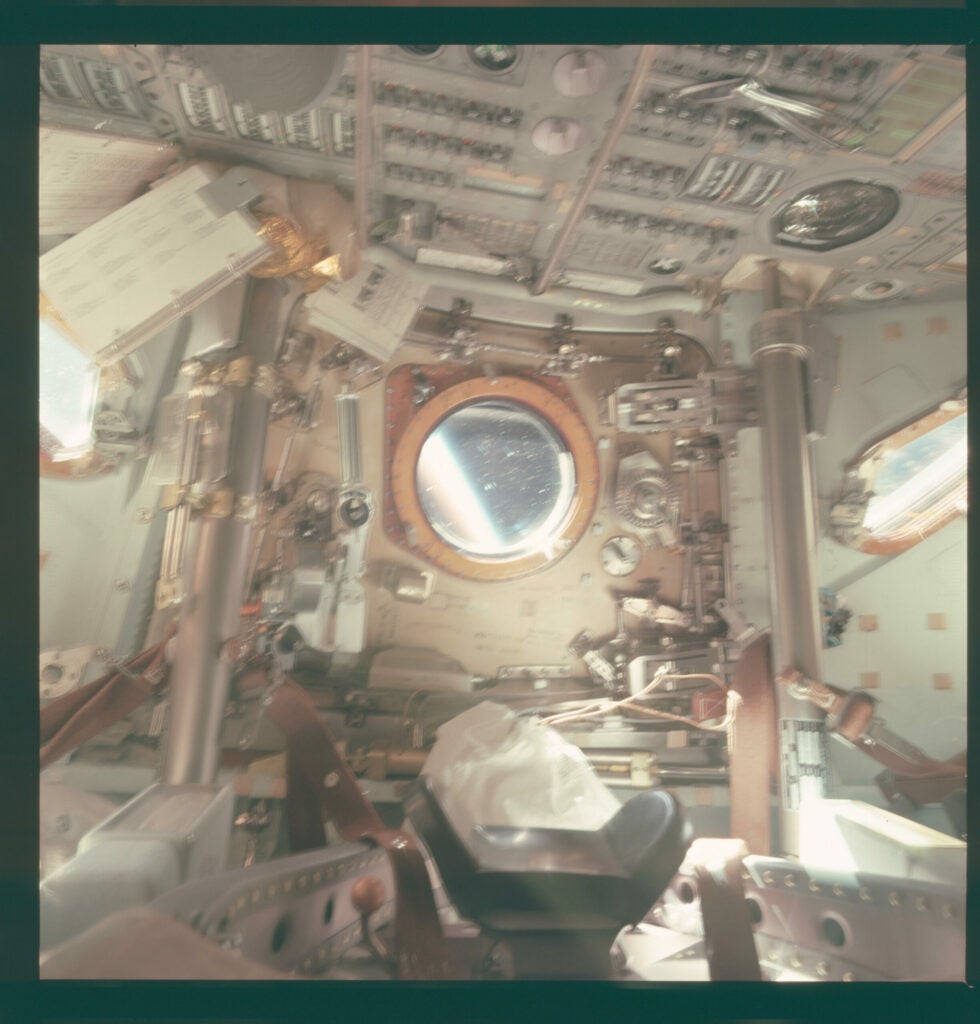 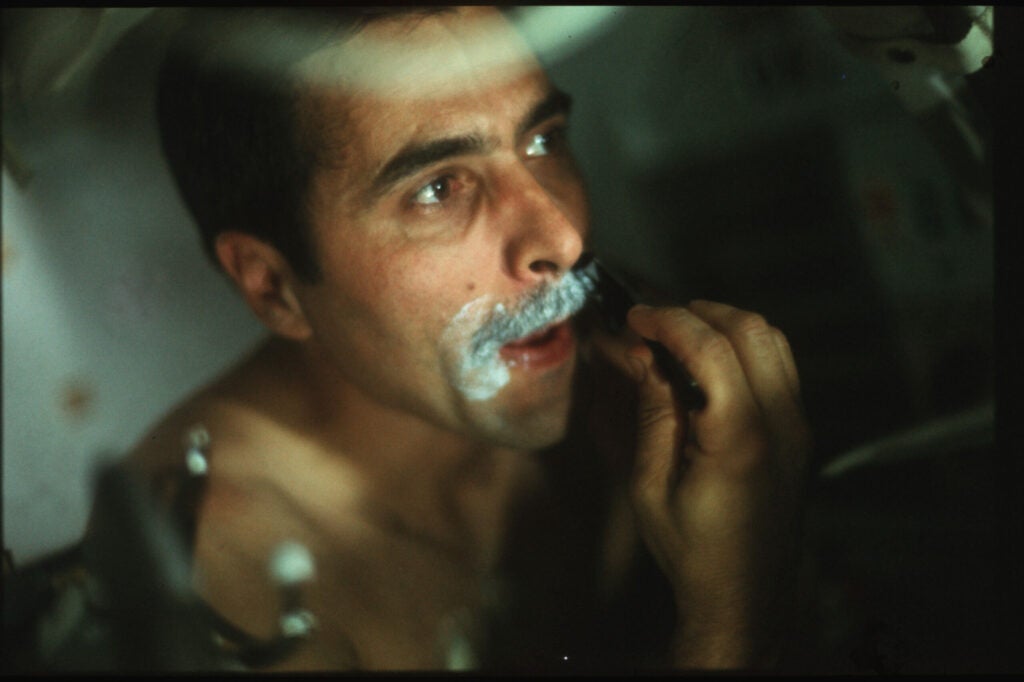 Grooming Around the Moon 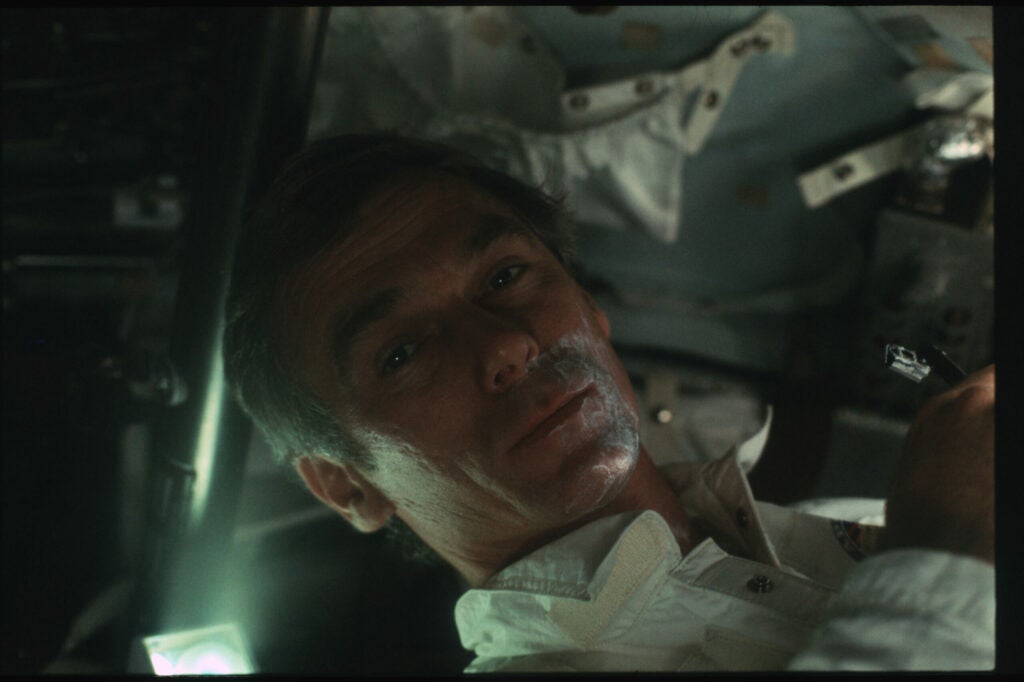 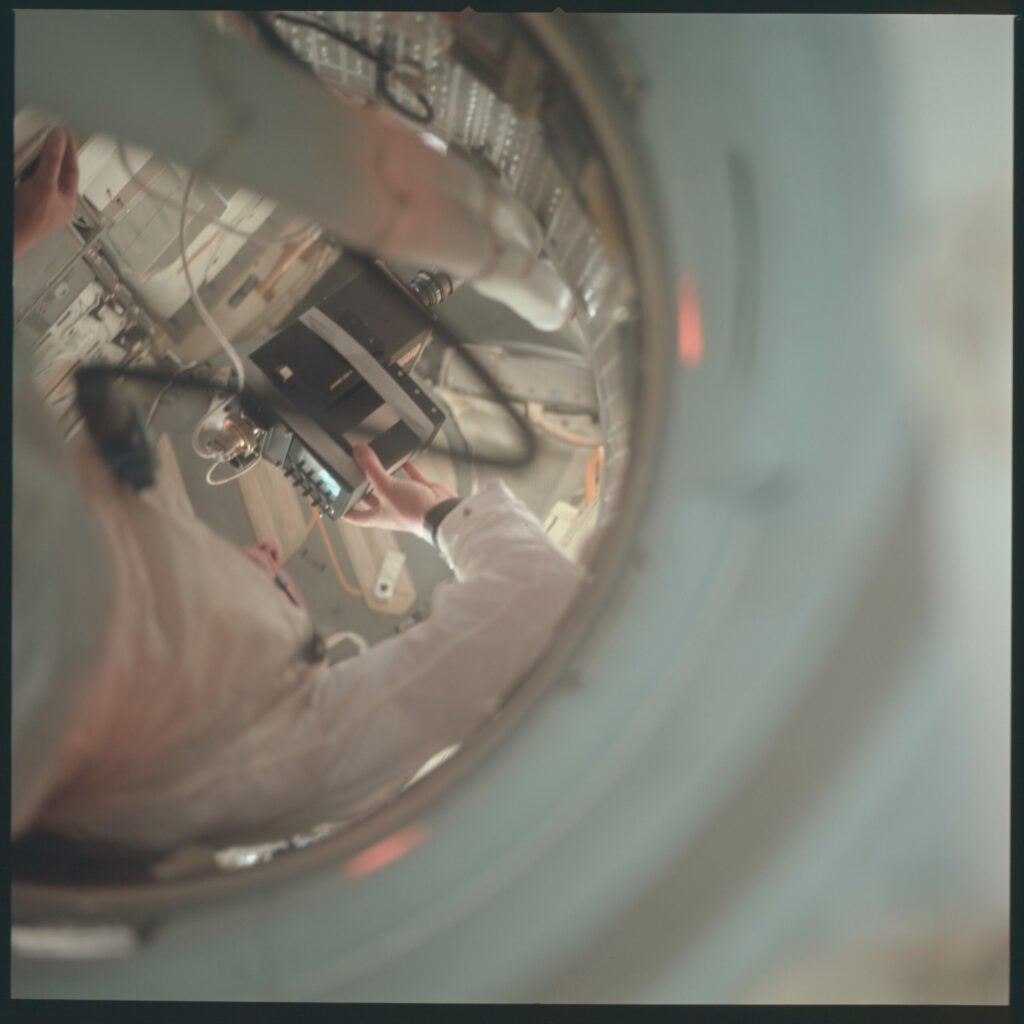 The view through the docking tunnel between the command and lunar modules on Apollo 11. July, 1969. 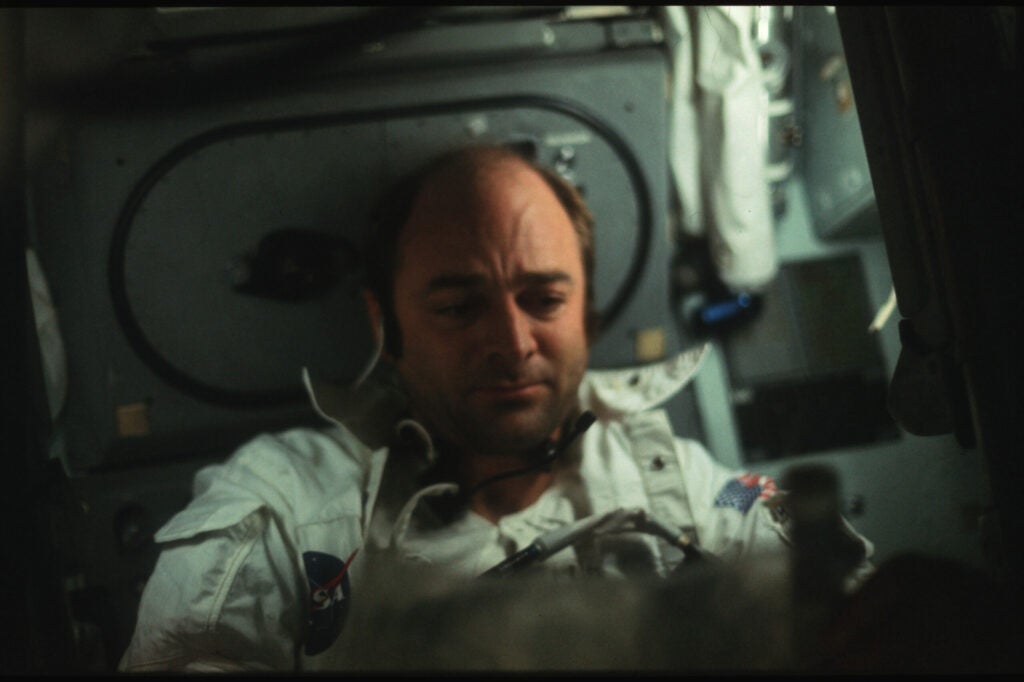 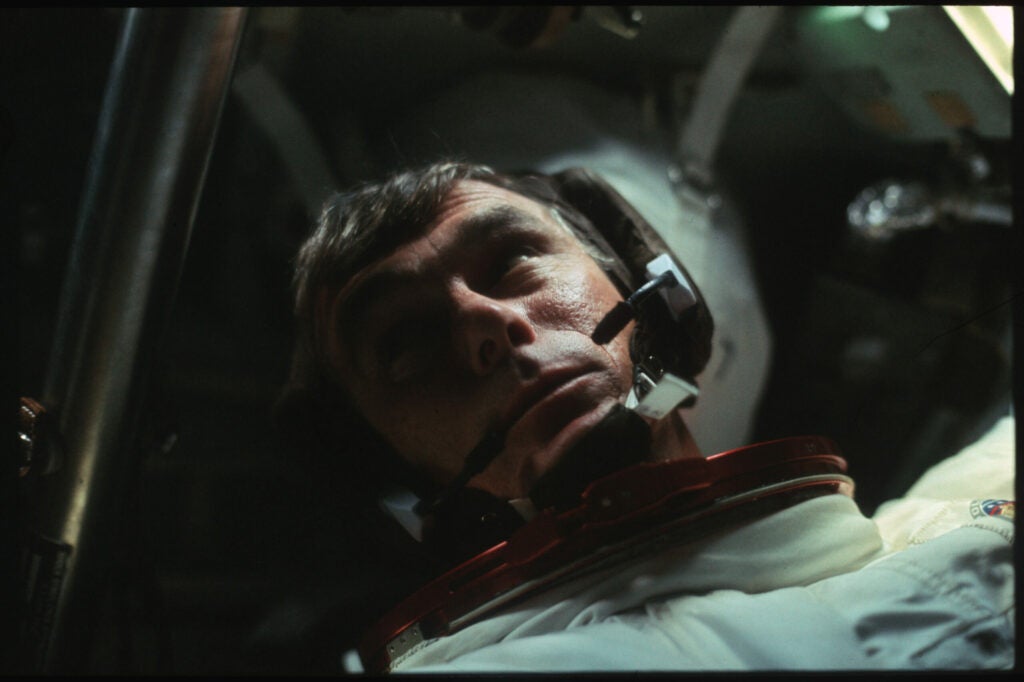 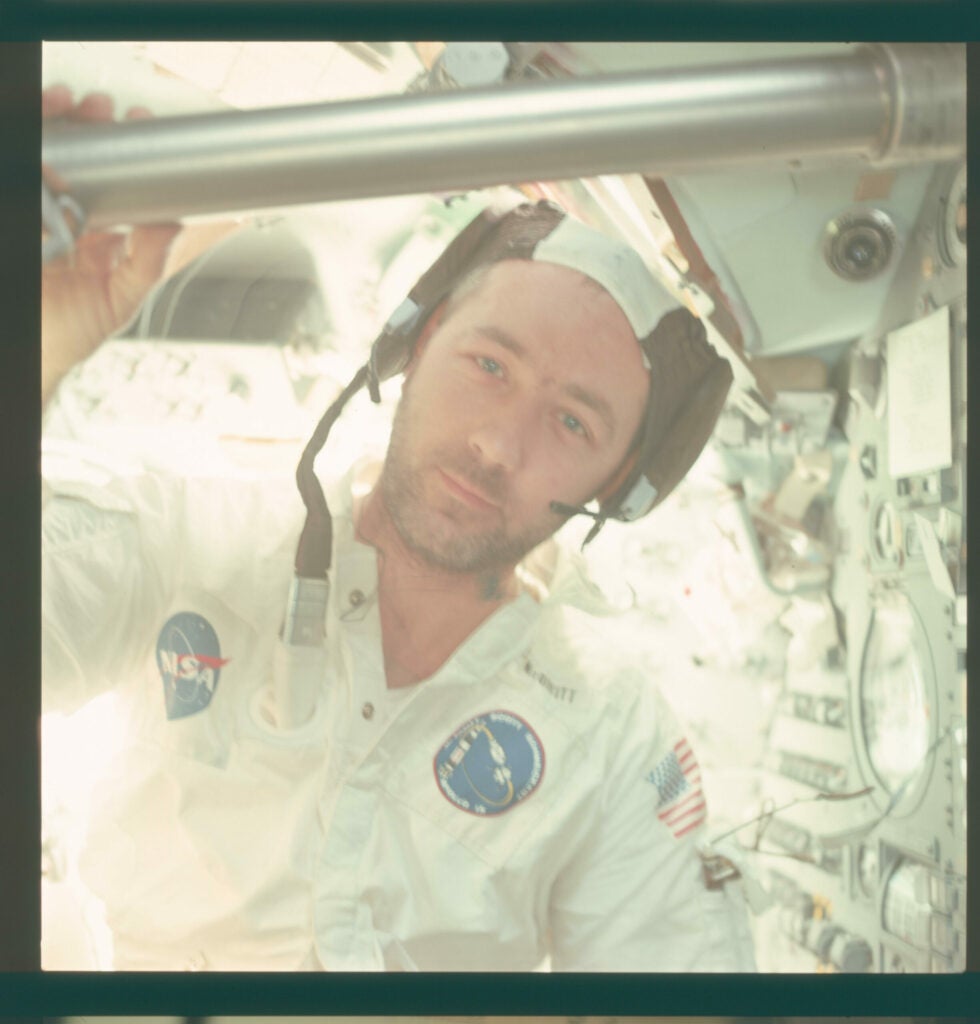 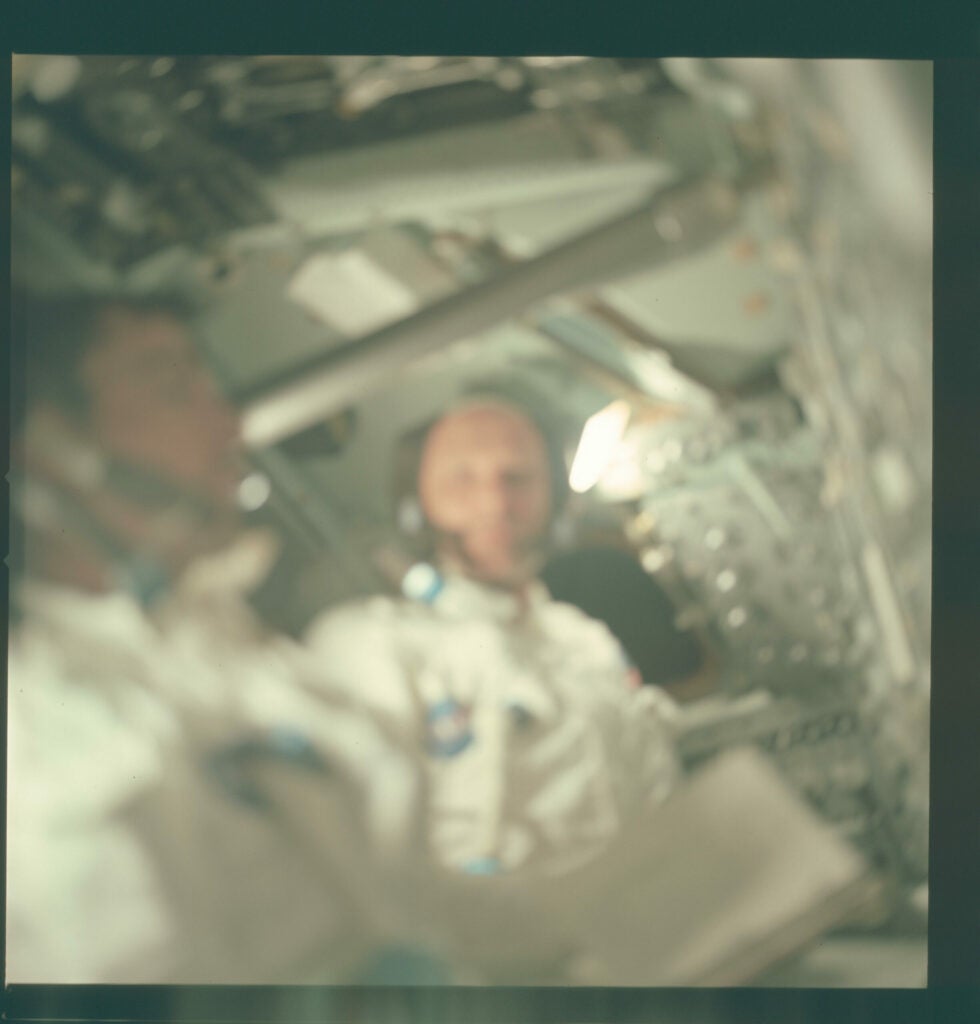 Two fuzzy astronauts on board Apollo 10, which went to the Moon but didn’t land. May, 1969. 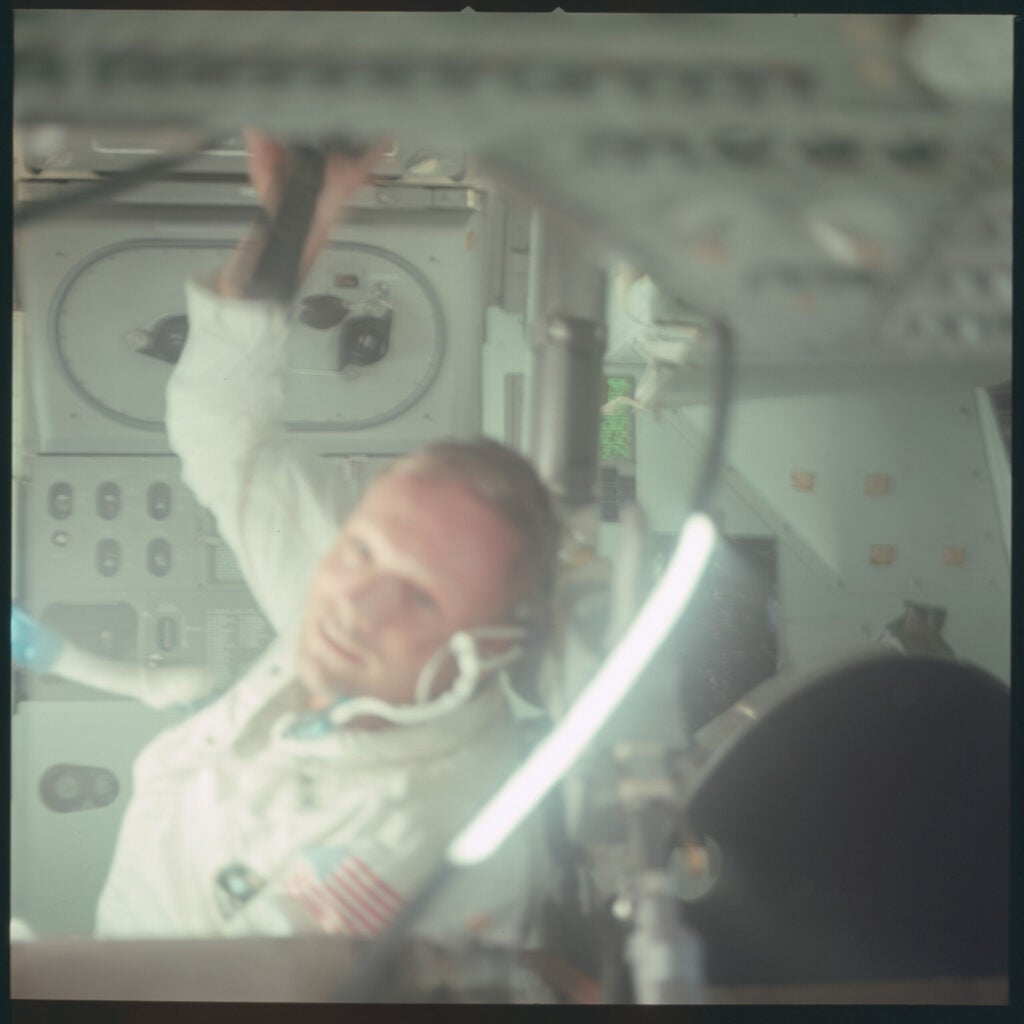 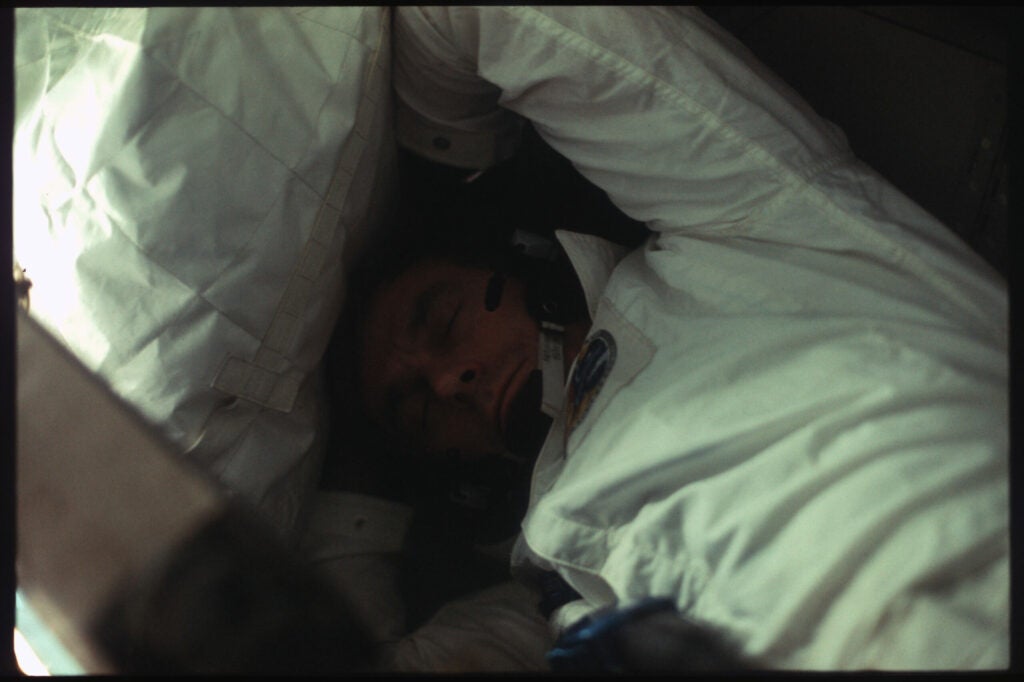 Gene Cernan sleeping in some tight quarters aboard Apollo 17. December, 1972. 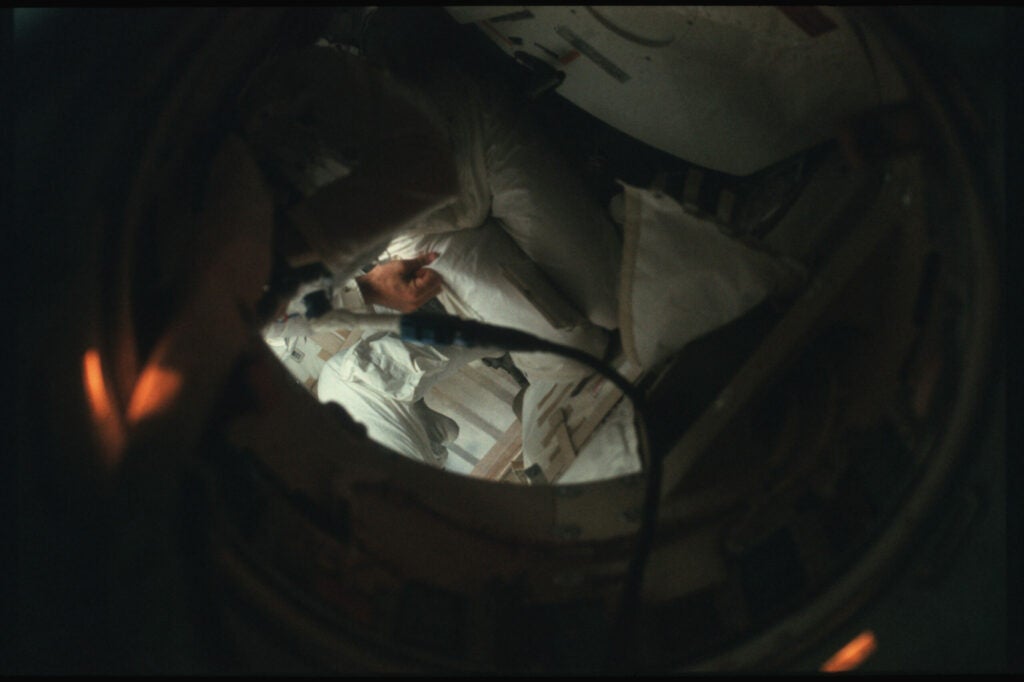 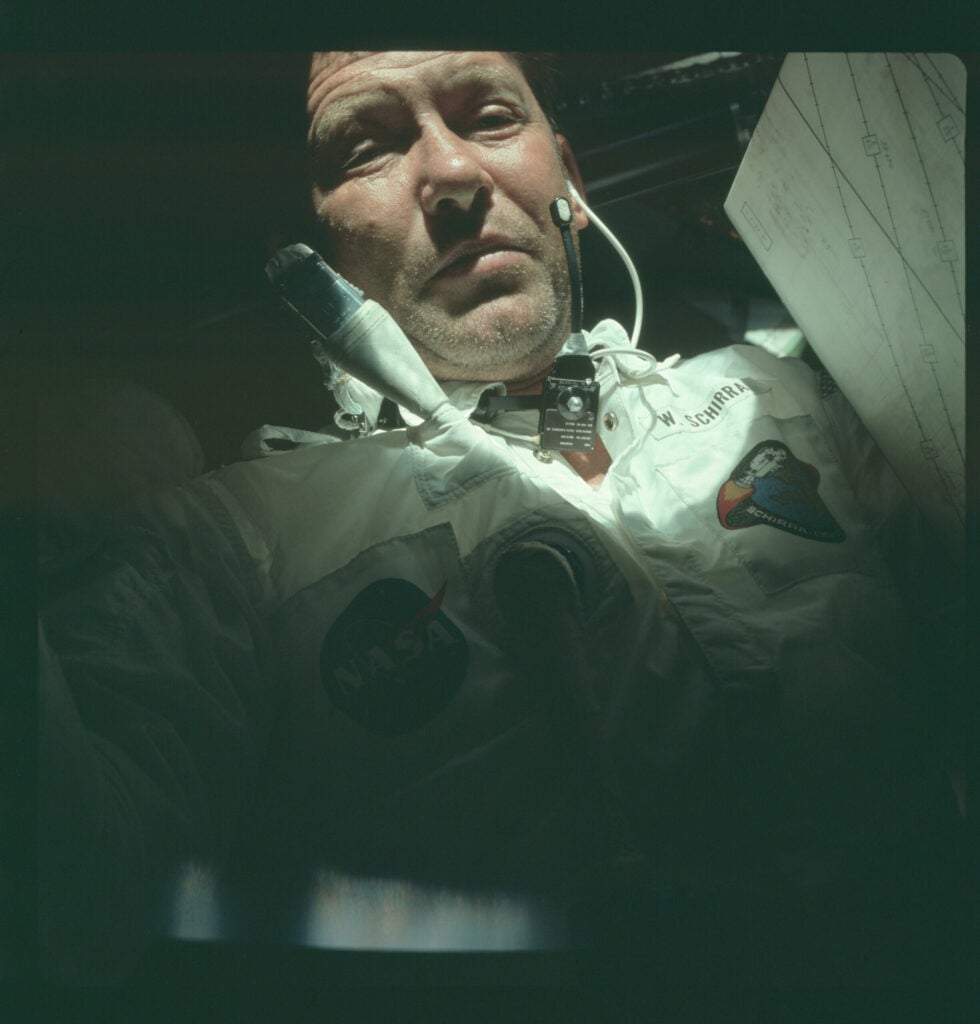 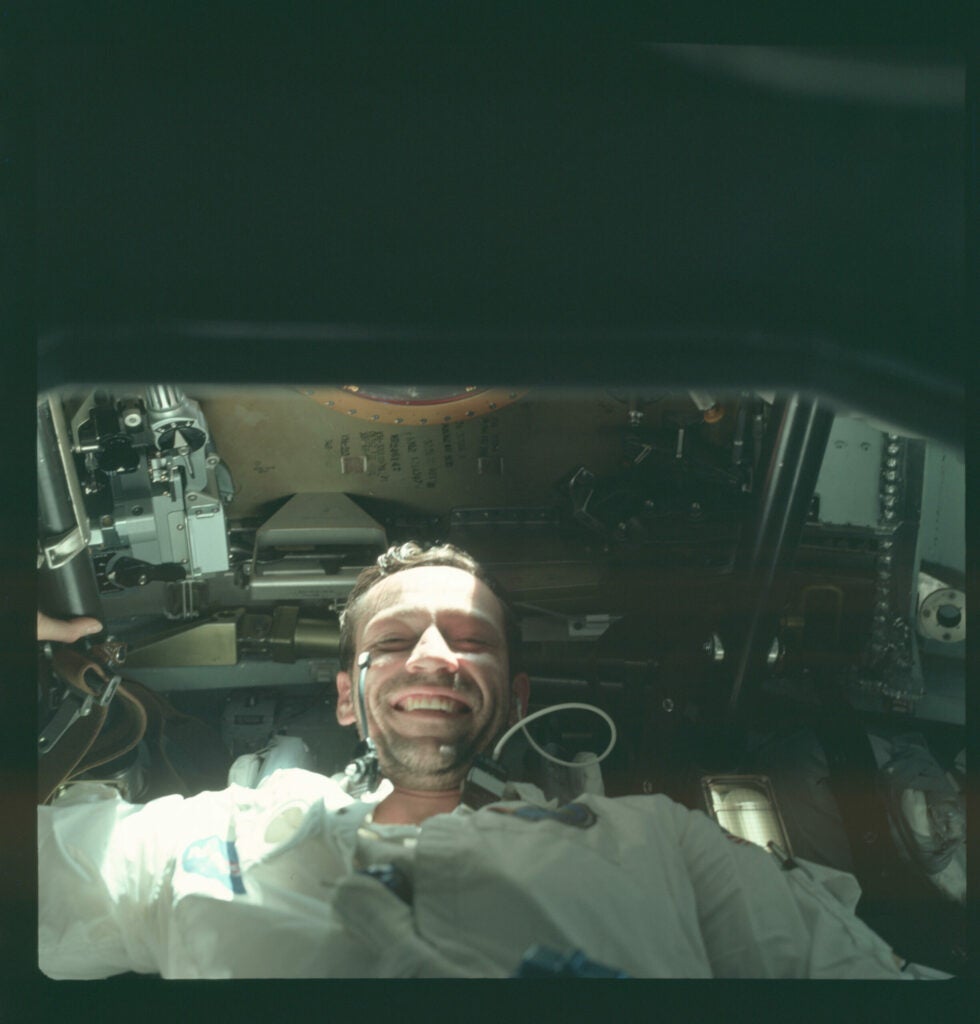 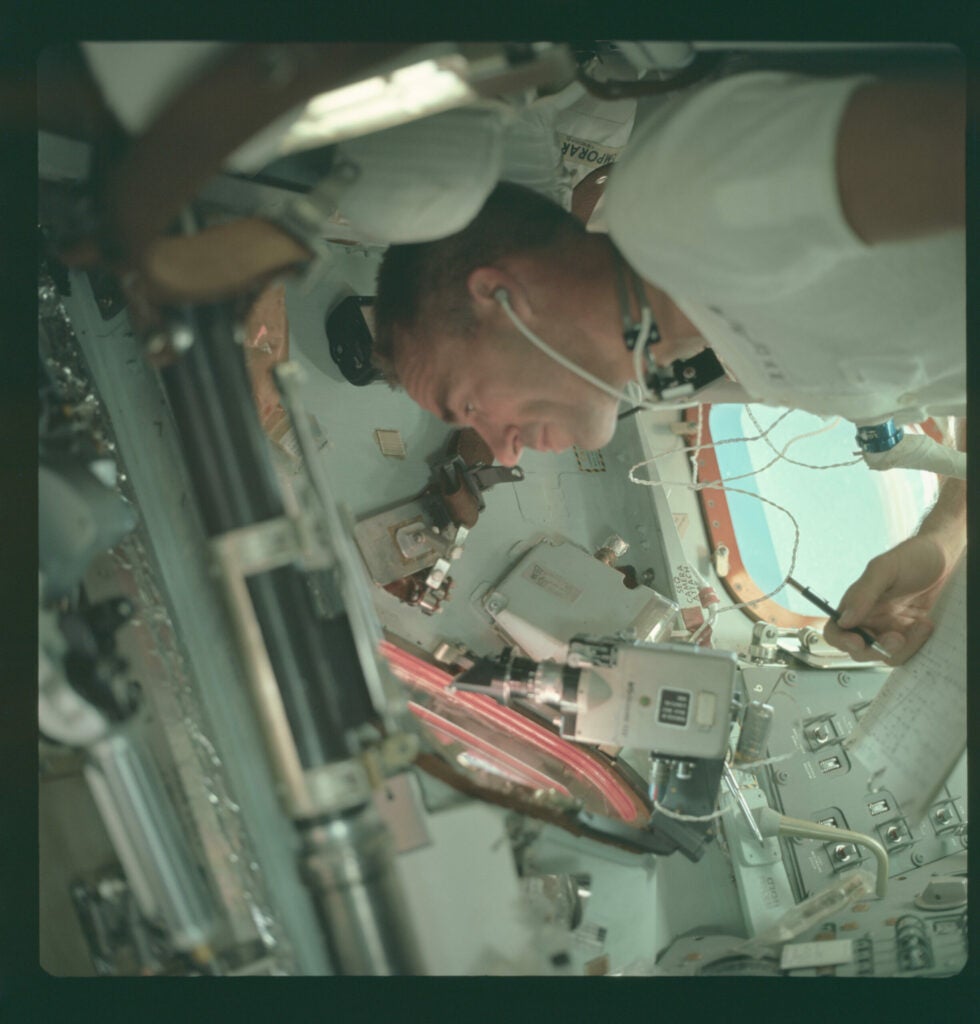 It doesn’t look too cramped with so much sunlight! Apollo 7’s Walt Cunningham. October, 1968.
Space
history