Martian Gullies Were Formed By Gliding Boulders Of Dry Ice

"I dream of snowboarding down a Martian sand dune on a block of dry ice," says Serina Diniega, the lead researcher. 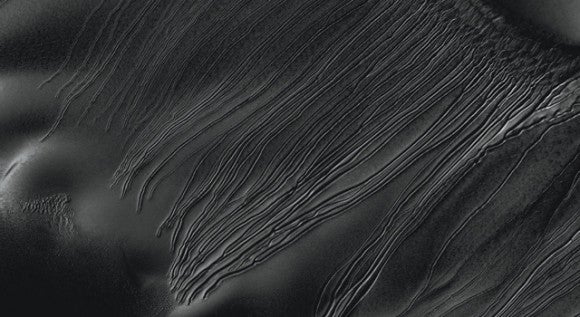 On the sides of some hills and mountains on Mars, there are curious features that have become known as “linear gullies.” These are long troughs or grooves, up to a mile long, that end abruptly.

On Earth, it’s not particularly odd to have a groove in a hillside, but if you do find one, you’ll typically find a pile of rubble at the bottom of the groove. Debris crashes down the hill, forming the groove, and then accumulates at the botom. But there are no such debris piles on Mars–the linear gullies just sort of…stop. How is that possible?

By comparing images of these linear gullies during different seasons, scientists at NASA figured out that they must be formed during early Martian springtime. (It’s a lovely time of year on Mars.) And, tellingly, the gullies form only on hills which have their tops covered in frozen carbon dioxide during the harsh Martian winter.

So the scientists theorized that the gullies were formed by frozen chunks of carbon dioxide–also called dry ice–breaking off of the top of the hill and rolling down, causing the gullies as they slide down the hill. But dry ice doesn’t accumulate; after a quick slide, the scientists imagined, it’d sublimate, leaving no trace behind. But how do you test a theory on a planet on which no human has ever set foot?

The team headed to the supermarket to buy chunks of dry ice. By heaving them down sand dunes, the team was able to recreate almost perfectly the Martian linear gullies. What’s happening is a Leidenfrost effect, in which the dry ice sort of skates or glides on a layer of its own vapor, pushing the Martian dust aside as it does. It’s similar to what happens when you toss some water droplets on a super-hot pan.

Hypothesis: likely. At least for some of the gullies.