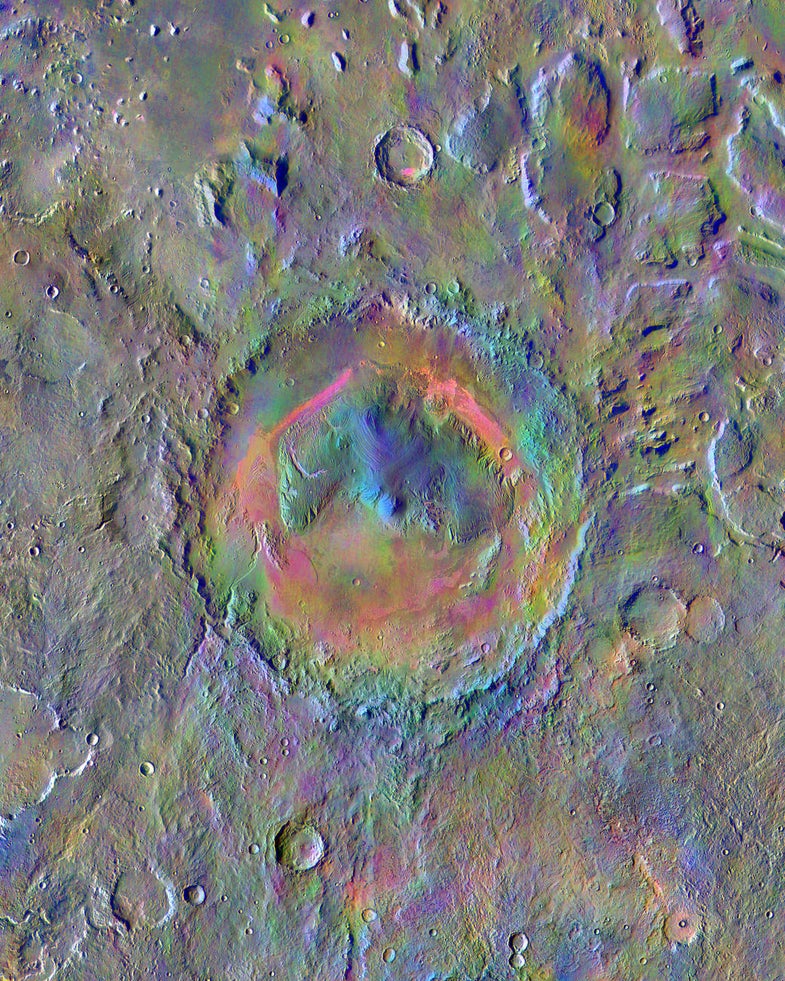 It’s a constant cycle. NASA puts out a press release saying new Mars news is forthcoming in a press conference. Then, the ultimate announcement is tantalizing—but far from the discovery of actual life on actual Mars.

This played out recently, with the announcement last month of the discovery of ancient organics found on the surface, and fluctuations of methane in the atmosphere on Mars. Methane is often produced through biological processes, so seasonal releases on Mars could be a sign that something is constantly replenishing an underground supply of that hydrocarbon.

But yet again–life wasn’t found on Mars. And NASA won’t be announcing the discovery of life on Mars anytime soon. It’s not disinterest on the agency’s part, instead it’s because of a simple fact: none of these missions had the capabilities to directly detect life, past or present. 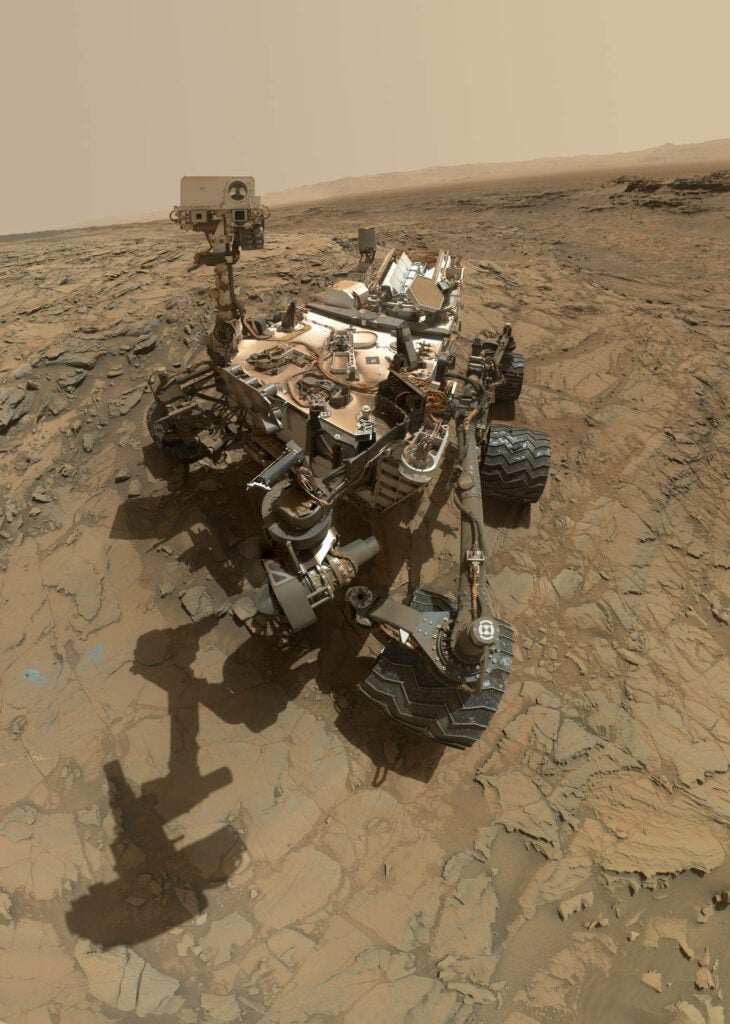 Curiosity Rover takes a self portrait

It’s a bright, hot June day at the InterPlanetary Festival in Santa Fe. Los Alamos National Lab is out vaporizing rocks for passers-by. On the stage, Nina Lanza, a staff scientist at Los Alamos, is talking Mars.

“There is methane currently in the atmosphere on Mars,” she says, “and it’s not just there constantly, it’s little puffs that appear to be seasonal.” Methane on Earth, she says, comes from volcanoes and life. “Methane doesn’t last long, it lasts on the order of a hundred years … so when we see methane on Mars, we know that something is making it now.”

“Don’t say you heard it from me that there’s life on Mars, we’re still working that out, but it’s an important observation for us to track down because of its implications.” Lanza says.

Lanza is part of the team behind the ChemCam on the Curiosity rover, currently exploring the ancient lakebed of Gale Crater. There are two components to the system: a laser and a spectrometer. The laser vaporizes rock samples, while the spectrometer looks for tell-tale traces of certain elements in the vaporized remains.

“We can actually see the constituent atoms of the molecules, so we can see, is there carbon here, is there hydrogen, is there phosphorus? Is there nitrogen? We can see all these things,” she told Popular Science after her panel. She has a handy acronym for it: CHyN OPS (pronounced “chin ups”), or carbon, hydrogen, nitrogen, oxygen, phosphorus, and sulfur. Each of these elements have a hand in life on Earth, but ChemCam can’t see how each of these individual elements interact to form molecules. So it can see hydrogen and see carbon, but can’t tell if the two are paired together or not.

That also means that ChemCam can only look for the most basic ingredients of life. It can’t confirm whether life exists or existed on Mars, even though the environment surrounding Curiosity would have been perfect for life at one point in time.

“Gale Crater is an environment that was absolutely habitable, we just don’t know if it was inhabited,” Lanza says. It’s unlikely—though not impossible—that there’s anything today, but there might have been in the distant past.

Luckily, NASA’s capabilities on the planet are about to expand. The Mars 2020 rover will get an all-new, souped-up version of the ChemCam called SuperCam. While ChemCam can pick up elements, SuperCam will pick up the key traces of molecules in its ultimate landing site. This means that it will be able to identify more complex organics rather than individual elements. Using the Laser Induced Breakdown Spectroscopy (LIBS), it will be able to get cursory information about rocks it hasn’t even vaporized yet.

Oh, and it will have a microphone.

“Not only are we going to listen to the Martians,” Lanza jokes, ”but you can actually get information about the target by the sounds the LIBS shockwaves makes.”

“When you shoot the laser, it actually does make a version ‘pew pew.’ It makes a snapping sound, and that sound changes based on what the material is and if you’re penetrating through a rock coating. that’s actually going to allow us to interpret our data even better,” She says.

NASA isn’t alone in its pursuit of biology beyond our planet. ESA and Roscosmos, the Russian space agency, have also teamed up on the ExoMars mission. Half of it has already arrived at Mars, though the Schiaparelli lander failed. The other half is set for a July 2020 launch. This rover will actually dig down into the Martian surface, scoop up samples, and test them for evidence of advanced organics—stopping just short of confirming past life, but taking bigger steps than ever before.

Mars 2020 will scoop up Martian surface samples, but it will store those onboard for future retrieval. NASA’s future past on Mars past the 2020 rover is unclear, but NASA has a target of putting humans on Mars by the 2030s. Once human boots are on the ground, confirmation of past or present life could come much more swiftly—as Lanza says, “I’m still a better geologist than Curiosity.” Humans could operate a microscope or a lab and complete more advanced experiments than the rovers—which are currently limited in scope by their a six-to-24-light-minute communications delay with Earth.

There is, of course, another component to Mars missions, though, beyond rovers, landers, and theoretical human explorers. That’s the orbiter.

While Curiosity may have dug into evidence of an ancient lake on the surface, much of the heavy lifting of finding water on Mars (over and over and over) has been up to a fleet of a few orbiters. A rover may be only able to explore a tiny fraction of Mars in their lifetime, but orbiters can give a comprehensive global view every day. Right now, there are a few Mars orbiters, but two of them do the most visual recon work: NASA’s Mars Reconnaissance Orbiter (MRO) and ESA’s Mars Express.

“With something like MRO, we can’t see anything smaller than the rovers on the surface really with the resolution of the cameras we have,” Tanya Harrison, the director of research at Arizona State University’s NewSpace Initiative says in a Twitter DM. “So if there were alien cars or alien buildings on the surface of Mars, we definitely would’ve seen them by now.”

Both Mars Express and MRO are more than 15 years old. A new orbiter with better capabilities could be able to make out more details about the methane plumes, and maybe even see them directly. The HiRISE instrument—MRO’s eye in the sky—isn’t sensitive enough to pinpoint the methane’s origin. For that, there would have to be a lot more methane getting released into the Martian atmosphere.

“MRO isn’t equipped to detect methane, but Mars Express has an instrument that was able to detect it spectroscopically,” Harrison says. “To see it visually, it the methane would have to be venting out at a level akin to fumaroles here on Earth—think like the plumes you see at the geysers or hot springs in Yellowstone or Iceland.”

One idea for a mission treats Mars exploration like a game of catch. A lander or rover would scoop up samples and launch them to orbit on a tiny rocket. The orbiter will then retrieve and store those canisters of Mars for an eventual return to Earth. This theoretical orbiter could provide an interesting opportunity to confirm life on Mars as never before with direct sampling.

“Using [an electron microscope] you can actually see structures that look like microbes, but we don’t have that on Mars,” Lanza says. “We have microimagers, but they’re not as high resolution. We can say there’s mineralogy, there’s chemistry, there’s organic molecules, you can build a very good circumstantial story and I think it’s reasonable. But for an extraordinary claim you require extraordinary evidence.”

Until that happens—don’t believe the hype.