FYI: Can We Make Mars Habitable By Pumping the Atmosphere Full of Oxygen?

In a roundabout way, yes. But first we must heat that atmosphere, since the surface of Mars is about –58°F.... 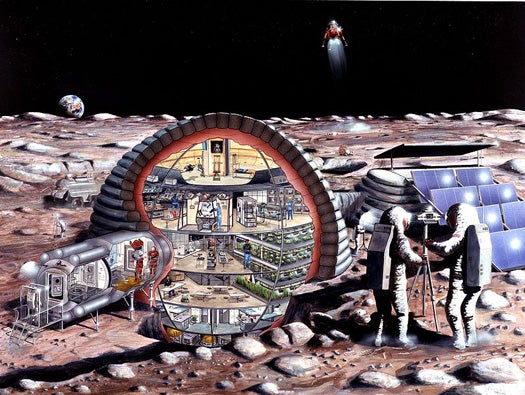 In a roundabout way, yes. But first we must heat that atmosphere, since the surface of Mars is about –58°F. “We know how to warm planets; we’re doing it right now,” says Robert Zubrin, the president of the nonprofit Mars Society, a group devoted to Martian exploration.

To make Mars more Earthlike, or “terraform” it, we just need to increase the greenhouse effect by adding fluorocarbons to the atmosphere, absorbing and trapping the sun’s rays. Tetrafluoromethane, or CF4, is a simple refrigerant that could work without destroying the ozone, as other fluorocarbons do.

As Mars warms, its frozen soil would thaw enough to release carbon dioxide, and more carbon in the atmosphere would further accelerate the greenhouse effect, bringing the average temperature up to 32°. Mars’s frozen underground water supply would melt and flow back into ancient riverbeds. And when the water reaches Martian soil, it would break down latent peroxides, releasing oxygen into the atmosphere—not yet enough to sustain human life, but enough to grow plants—which would further increase the supply.

Once the plants took root, we could just wait for oxygen to accumulate. At this point, Mars colonizers, who Zubrin imagines would work out of a research base camp and wear something akin to scuba gear to supplement their oxygen intake, would also grow algae and seaweed in ponds, which could anchor a growing food chain. “You could have fish farms on Mars,” he says. “Water would become the first environment that would be habitable by higher animals without any kind of artificial assistance.”

After bringing in fish, we could begin introducing land-dwellers to Mars, starting with insects and, as more and more oxygen became available, progressing to warm-blooded creatures. Using this process, Zubrin says, humans could walk around without supplemental oxygen within 1,000 years. But he also predicts that we’ll come up with other ways to speed up our settlement of Mars, such as genetically engineered plants that photosynthesize faster. “We can grapple with it and come up with a way to do it using 20th-century technology,” he says. “Yet these are solutions that people in the future will consider prophetic but quaint.”

Ask Us Anything
atmosphere
Mars
may 2011
oxygen