Global Warming Could Be The Best Way To Terraform Mars

Finally, a good use for climate change

An artist's impression of what Mars might have looked like long ago when it had liquid water and a thick atmosphere. Could we make it look like this again?. Michael Lentz/NASA Goddard Conceptual Image Lab
SHARE 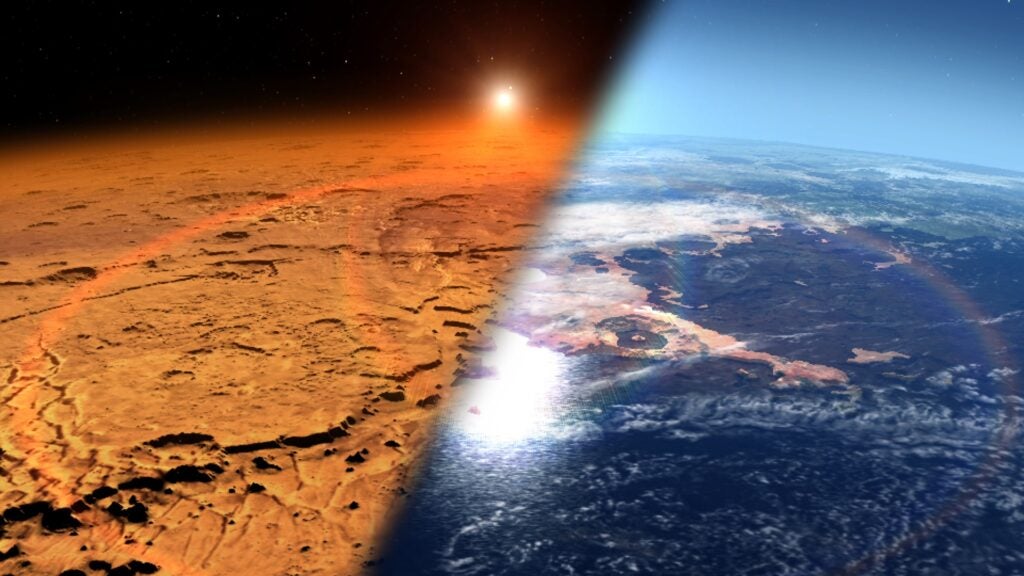 An artist’s conception of what Mars looks like today, juxtaposed with what Mars may have looked like earlier in its history, when the planet had a thicker atmosphere.

We’ve been looking for life on Mars for centuries. Humans have parsed every geological feature that we can find for traces of living neighbors, or at the very least, evidence that some type of creature lived on the red planet in the past. So far, no luck.

In the absence of evidence of life, a not-so-new idea is gaining ground: If we can’t find life on Mars, maybe we could bring life to Mars. Not only that, but we might be able to change the nature of the red planet itself, and turn a dry and lifeless world into a mirror of our own blue and green marble.

It sounds like science fiction, but researchers in the public and private sector are already looking at how current technology can terraform Mars, in part because it would make permanent human settlements much more plausible.

An artist’s impression of what Mars might have looked like long ago when it had liquid water and a thick atmosphere. Could we make it look like this again?

Yes, it is possible—but it probably won’t be a dramatic solution like Elon Musk’s plan to repeatedly detonate nuclear weapons in the now-thin Martian atmosphere.

As McKay and other researchers have previously discussed, we already have the power to change Mars. We know we can heat up the frigid planet, because we’ve tested the concept here on Earth.

“Global warming is harnessing sunlight to warm up the Earth,” McKay says. “The Earth is warming, and it’s not warming because of nuclear weapons; it’s warming because of sunlight, which is huge energy flowing in and flowing out of the planet.”

“If you want Mars to be more Earth-like you’re going to need to make the atmosphere thicker,” says Michael Chaffin, a researcher working on NASA’s Mars Atmosphere and Volatile EvolutioN (MAVEN) mission. “Looking at the history of Mars, we know that early on the atmosphere had to be thicker to support water.”

Currently, the atmosphere is so thin and cold that liquid water can only exist on the surface for brief flashes of time.

But theoretically, if we were able to pump greenhouse gases into Mars’ atmosphere, we could warm the surface of the planet enough for liquid water to be stable on the surface, as it was in the distant past (roughly 3.5 billion years ago). The thicker atmosphere would also provide enough pressure to help water remain stable.

One way this might be possible, McKay says, is to manufacture super-greenhouse gases or perfluorocarbons (PFCs) in automated factories. These compounds would trap the heat from sunlight on Mars, without disrupting the planet’s fragile ozone layer or posing a toxic threat to human settlers.

Once we got the planet nice and warm, something that McKay estimates could happen in about 100 years, we could then start adding plants. By gobbling up carbon dioxide and pumping out oxygen, greenery would gradually alter the chemistry of the atmosphere to make it breathable, a process that would likely take thousands of years.

That sounds like a long wait—but when you consider that Earth has been around for about 4.6 billion years, a century or even a few millennia becomes a more manageable timeline.

One thing that any future terraforming efforts will have to take into account is that Mars already has some greenhouse gases, such as carbon dioxide. If researchers don’t account for these gases, they could boost the planet’s temperatures way too high.

“You’re starting at Mars. You want to end up somewhere close to Earth. How do you keep it from becoming Venus?” McKay says. Though both planets are the same size, Venus has a much thicker atmosphere than Earth—comprised of many greenhouse gases—and temperatures on its surface are hot enough to melt lead. Not only that, but the atmospheric pressure at the surface is the equivalent of pressures normally seen 3,000 feet deep in the ocean.

McKay is currently working on how to calculate the amount of carbon dioxide that is currently frozen in the ground on Mars near or under the polar ice caps. Current estimates put the amount of carbon dioxide at amounts far below the threshold needed to warm the planet, but the actual estimates remain unknown, and researchers want to be sure of how many other greenhouse gases are lurking in the ground before starting any kind of terraforming process.

So let’s move ahead and assume scientists calculate the correct quantity of greenhouse gases for a perfect terraforming process. Humans will be able to build up an atmosphere on Mars that will be warm and wet enough to support life. But what will happen to that carefully rebuilt atmosphere over time?

The difference is timing. McKay notes that many estimates have Mars losing its atmosphere over the course of 100 million years. That might be a short time in the whole span of the solar system’s history, but on a human time scale, it’s long enough to make the effort worth it.

“There is no permanency in the Solar System anyways,” McKay says. “We’d change Mars on time scales that are very very long compared to human time scales. 100 million years is a long time to spread out the mortgage payments.” 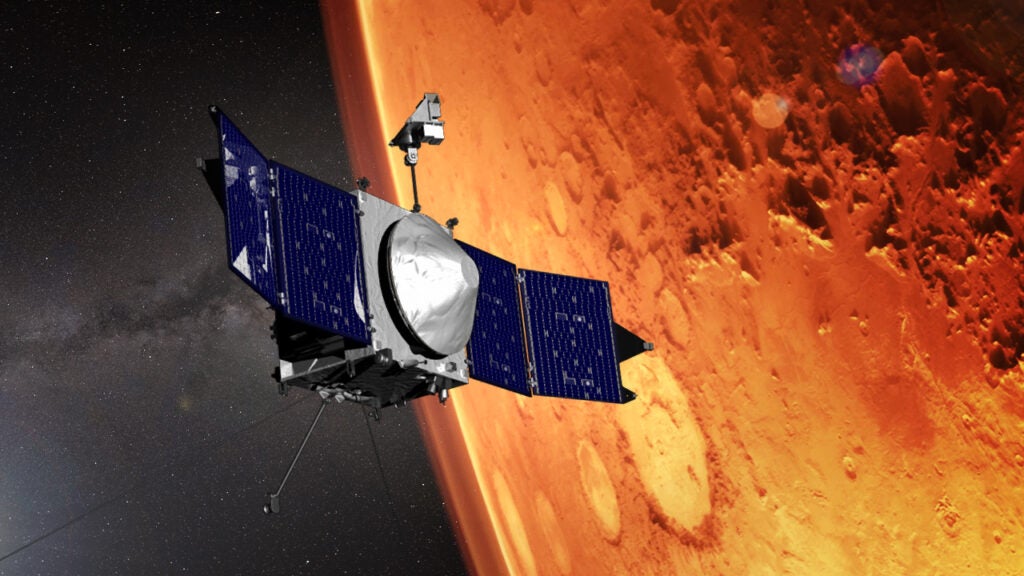 An artist’s illustration of MAVEN, a mission currently studying how Mars loses atmosphere into space, and how it might have lost so much of its atmosphere in the past.

The differences between Venus, Mars, and Earth might seem obvious. One is too hot, the next is too cold, and the third is just right. But they’re all rocky, mid-size worlds. And to a large extent, the long-term climate models that we’ve developed for Earth can fit the other planets as well. We just need to account for differences in the thicknesses of the atmospheres, the sizes (Mars is smaller than the other two), and each planet’s relative proximity to the Sun.

But there are some aspects of Mars’ climate history that remain a mystery to researchers.

“All of the rovers we sent to the surface, and many of the orbiting missions, have given us evidence that water was present on Mars early on in solar system history,” Chaffin says. “If you go back 4 billion years, there had to be lakes and rivers on Mars, at least for short periods of time, to generate the features that we see.”

“So we have a mystery. We have a planet that can’t support liquid water today, but has supported large amounts of liquid water in the past. There had to be a change in the atmosphere of the planet,” he says.

That’s where MAVEN comes in. The NASA probe has been orbiting Mars—analyzing the atmosphere’s composition, measuring radiation and charged particles, and sending data back to Earth—since 2014. The researchers analyzing that data are trying to find out how Mars currently loses atmosphere into space, and how it might have lost so much of its atmosphere so dramatically in the past.

“The loss of charged particles from the Mars atmosphere is about a quarter pound per second,” Chaffin says. “That is enough to remove an entire present day atmosphere over Mars history. But that’s not enough to explain an early thick atmosphere being lost.”

There are still many questions about Mars’ atmosphere. Some of the biggest ones involve not current research, but our choices in the future. 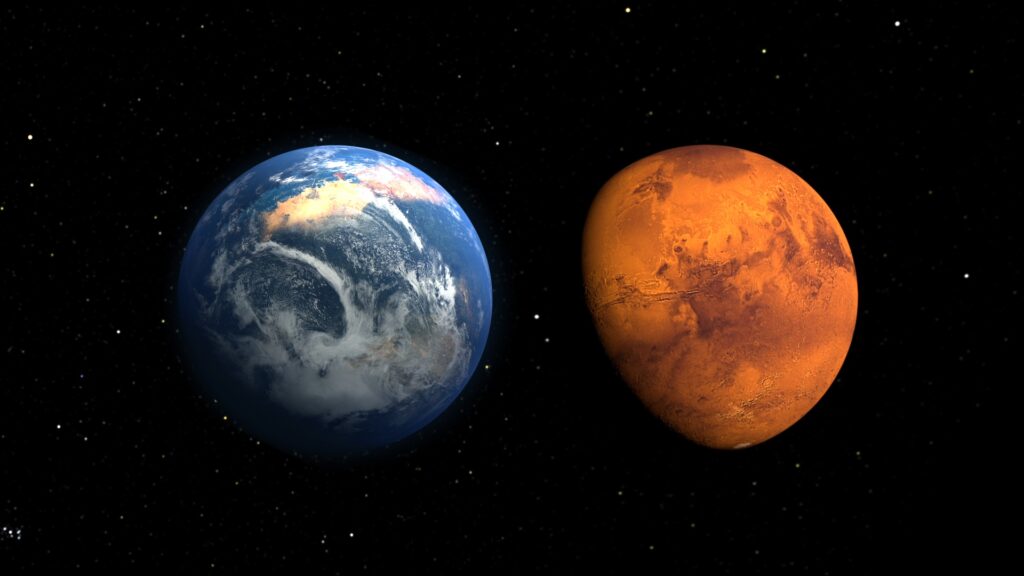 On the left, an artist imagines what a warmer, wetter Mars might have looked like in the distant past. On the right, Mars as it appears today.

People are already dreaming of a permanent human base on Mars. If these plans go through, humans will have to live on a world with frigid temperatures and high levels of radiation. Under these conditions, the expenses and tradeoffs of terraforming might make a lot of sense to the new Martians. Why not make their new home more Earth-like, and thus friendlier to humans?

We know humans have the power to raise a planet’s average temperature—because that’s exactly what’s happening on Earth. With a Martian settlement, it may become even more appealing to take the lessons learned from global warming on Earth and apply them to another planet.

“If there are people that are living on Mars that think of Mars as their home, terraforming might be something they have an incentive to push for.” McKay says.

In our rush to make Mars more Earth-like, however, we could cause permanent damage. What if, on a future expedition to Mars, we discover microbes living on the un-terraformed Martian surface? That discovery would mean that changing the planet could wipe out alien life.

“The question of the ethics of life on Mars are not scientific questions,” McKay says. “They’re obviously questions of value. You can have reasonable people think the problem through carefully and reach different results.”

The dilemma would come down to the existence of a tiny alien smudge versus the well-being of Earth-based life. “We as a society would have to agree on what we’re going to do on other worlds,” says McKay. “We all know what we should do on Earth, whether we do it or not. We should preserve life and preserve nature, and on Earth they’re the same. You go to Mars, and they’re not the same, and we don’t have a consensus in principle, much less in practice, of what we should do.”

As plans to send humans to Mars gather steam, discussions like these will become more important. We need to start moving beyond the mere practicalities of terraforming Mars, and begin exploring what our principles are, and what actions we might actually put into practice.