Why does NASA keep launching Wright brothers’ stuff into space?

Ingenuity, the Mars Helicopter, has a tiny piece of the 1903 Wright Flyer on board. Here's why. 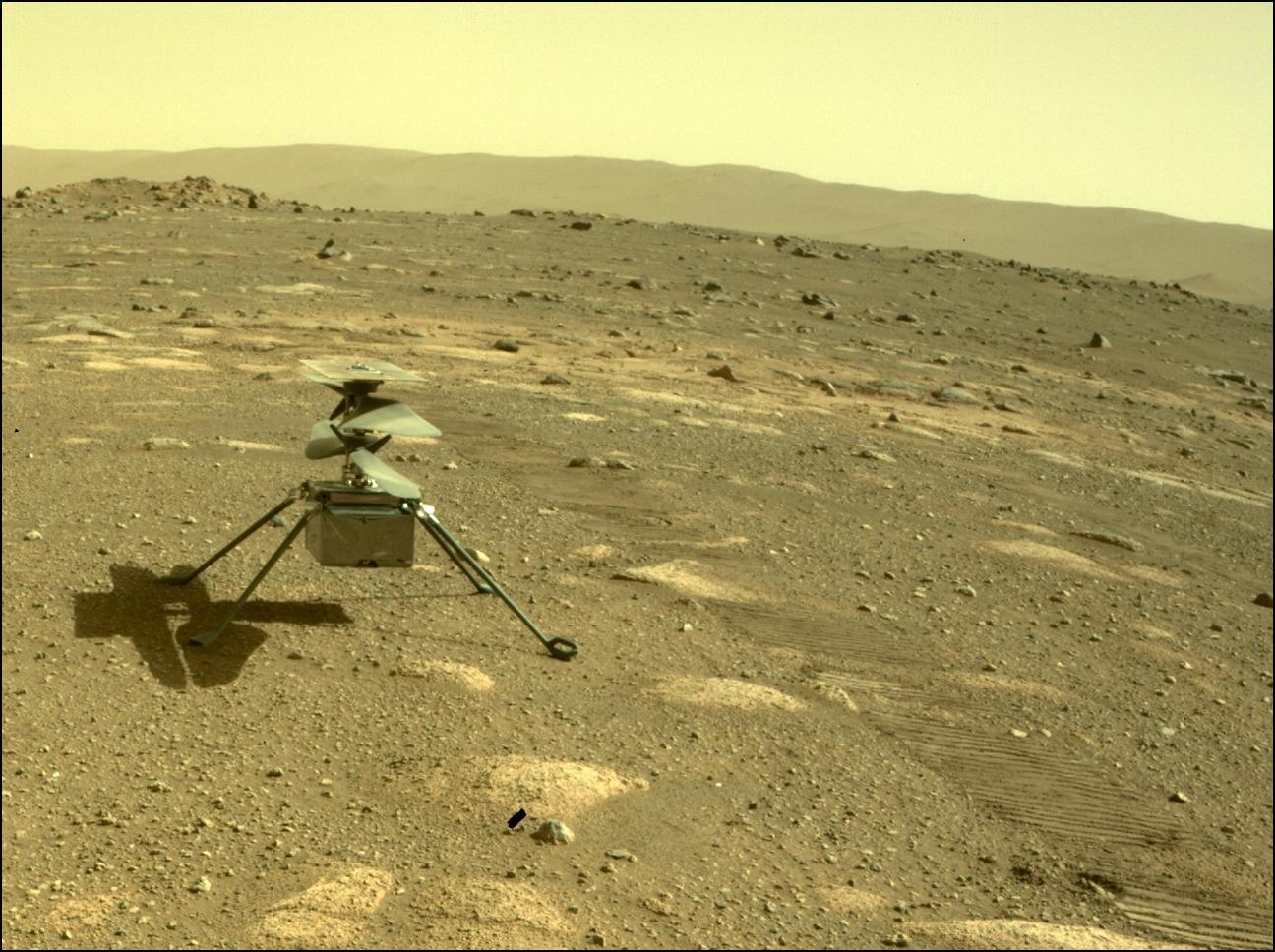 On April 19, 2021, Ingenuity, the Mars Helicopter, made the first flight on another planet.

Some 118 years had passed since Wilbur and Orville Wright achieved the first airplane flight on Earth. Still, NASA’s Jet Propulsion Laboratory (JPL) properly hailed the event as a “Wright brothers moment.” Just like the Wrights, the Ingenuity team faced years of mishaps, milestones, and victories before they saw success. Since that day last month, the Mars chopper has flown five more times, with plans for another flight soon.

One tiny detail physically links the Mars drone to the Wright brothers. Nestled under Ingenuity’s solar panel, cloaked around a cable, fastened with insulative tape, is a one-inch swatch of vintage fabric from the 1903 Wright Flyer, the world’s first airplane. “Everything is hard on Mars, millions of miles away,” says Mackensie Wittmer, executive director of the National Aviation Heritage Area, which encompasses the Wright Brothers National Museum at Carillon Historical Park, the organization that gifted the Wright Flyer fabric to JPL. “Yet NASA chose to make their mission harder by adding this piece of fabric.”

Mars is, indeed, a ruthless world. At night, temperatures plummet to minus 130 degrees Fahrenheit; aeronautical equipment can freeze and crack and falter. The Red Planet’s atmosphere is also 99% less dense than Earth’s atmosphere. Adding a tiny piece of fabric meant introducing a physically superfluous component to a helicopter that already had its work cut out for it.

According to Bob Balaram, Ingenuity’s chief engineer at JPL, before the Wright Flyer fabric could fly to Mars, NASA had to laboriously sterilize the artifact in an autoclave (which is like an oven) to prevent outgassing and kill any bugs or Earthen spores. Mars 2020 is an astrobiological mission, so mistaking Earthen spores for Martian life would be a blunder.

“This was obviously significant to NASA,” says Wittmer. “I imagine they looked to the Wright brothers and said, ‘If the Wrights could do this 118 years ago, we can do this now.’”

But this wasn’t the first time NASA had done something like this—the agency has a long tradition of sending Wright Flyer ephemera to space. These relics are, indeed, significant to NASA, and they’re significant to us. But why go through all the trouble of launching these items into space?

The answer was first posited by pioneering psychologist William James in his 1890 book, The Principles of Psychology. “A man’s Self is the sum total of all he can call his,” wrote James. If our possessions increase in number, James postulated, we feel victorious; if our possessions dwindle, the opposite is true. Essentially, for all its pitfalls, materialism can boost our sense of self.

According to Bruce Hood, a professor of developmental psychology in society at the University of Bristol, humans are unique in this regard. Other animals do not view possessions as an extension of the self.

“Many animals recognize and fight over possessions in the forms of territory, food, and mates,” says Hood, the author of Possessed: Why We Want More Than We Need. “But we humans recognize the concept of ownership—that something can belong to another in perpetuity and that, in a sense, possessions still represent them when they are dead. Some of the earliest grave artifacts are personal possessions, presumably for the afterlife. We can also form emotional or sentimental attachment to objects that belonged to others.”

The Wright Flyer fabric aboard Ingenuity is hallowed because it belonged to the Wright brothers. Replace it with a replica, and it loses all significance.

“Human touch seems to grant objects additional meaning,” says Adam Waytz, a professor and psychologist at Northwestern University’s Kellogg School of Management. “Research shows that we value objects more, pay more for them, and see them as more authentic when they have had contact with humans.”

That’s key. Only when we can authenticate that an object belonged to a significant person—a loved one, a family member, a celebrity—are our emotions aroused.

[Related: Why we’re still obsessed with the watches astronauts wore to the moon]

“This psychological bias is best explained by the concept of essentialism,” says Hood. “Things of psychological importance are often, but not always implicitly, perceived to be imbued with a metaphysical property that defines their identity. Their essence.” By this rationale, an item that is associated with the Wrights carries along their essence.

In July 1969, Neil Armstrong pioneered the tradition of sending Wright Flyer ephemera to space. “NASA contacted my family before Apollo 11,” says Stephen Wright, the Wright brothers’ great-grandnephew. “Half of what Neil Armstrong took to the moon came back to our family. I’m looking at a piece right now.”

Sending Wright brothers ephemera to space not only recognized NASA’s roots, but it also proved a great PR move, so in October 1998, the tradition continued when John Glenn carried a swatch of Wright Flyer fabric aboard the Space Shuttle Discovery. Two years later, Discovery sent another Wright Flyer fabric swatch to the International Space Station.

“These artifacts are key to understanding our past,” says Wittmer. “They are our physical link to our own timeline. There were those who came before us. There will be those who come after us. And their emotional significance can inspire action.”

By attaching meaning to artifacts, we transform humdrum objects into sacred relics. In a very authentic, emotional way, we bring the past to life to inspire the future.

[Related: NASA’s Mars helicopter may soon be the first to fly on another planet]

Of course, the brothers aren’t literally traveling to space. Still, the Wright family believes the gesture would have resonated with Wilbur and Orville. “I know they would be absolutely thrilled,” says Stephen Wright. “NASA still recognizes they did the pioneering work to make this happen. It’s so gratifying.”