Could A Spacecraft Fly Straight Through Jupiter? 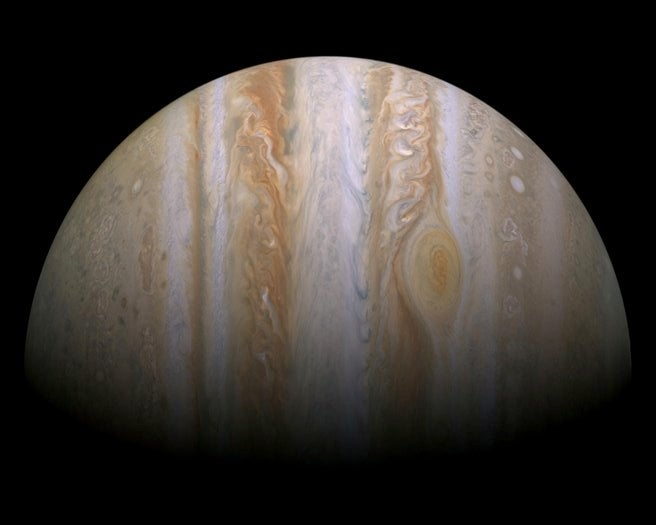 Despite its gusty reputation as a “gas giant,” Jupiter’s blood-red clouds hide a dense, rocky core that’s perhaps 20 times as massive as Earth. That core blocks any spacecraft’s passage through the center of the planet, but even a detour through the clouds would be a disaster.

Knowledge of Jupiter’s innards is scarce, mostly coming from the Galileo probe, which in 1995 plunged 100 miles into the Jovian atmosphere and relayed data until it vaporized an hour later. But here’s what we know: First, any spacecraft would need to make it through Jupiter’s instrument-scrambling radiation belts, the harshest of which extend 200,000 miles from the planet. Then it would face winds of up to 230 mph tearing across the surface of the planet’s turbulent hydrogen-cloud atmosphere and, if it survived those, gusts of nearly 400 mph starting about 28 miles into the atmosphere. In the first 100 miles, temperatures run to around 306°F, and scientists suspect that it’s up to 50,000° closer to the core. The atmosphere likely ripped apart the 1.2-mile-wide Shoemaker-Levy 9 comet when it hit Jupiter back in 1994. Just saying.

Some 9,000 miles farther in, sandwiched between the atmosphere and the hot, rocky core, the interior most likely consists of liquid metallic hydrogen. The highly conductive fluid can exist only under space-shuttle-crushing conditions like the planet’s 44 million pounds per square inch of pressure.

This article originally appeared in the October 2009 issue of Popular Science_ magazine._

Ask Us Anything
Solar System
Space